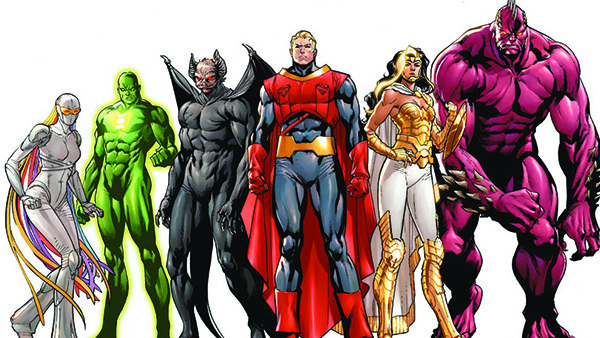 I was wondering, do any of you know about stan lee creating his own justice league?
(And yes, I’m talking about the Marvel Stan Lee)

I know he gave each of our favorite heroes in a strange new look, it was interesting. But I honestly don’t know too much about it.

I remember this series. It was interesting. I kind of felt like he was trying to tell a bigger story than he had time to, though. Definitely something to check out, if you get the chance. I kind of wish he’d chosen a different name for his Batman, though.

I think I bought 2 or 3 of the issues, but I don’t really remember them much.

For those who don’t know, I definitely remember the schtick: Stan Lee was challenged to create all-new characters using just the names of key DC characters, but completely re-imagine who and what else they could have been.

Looks like a wild superhero supervillain team up in the time of crisis.

“Just Imagine Stan Lee Creating…” is fun. Of the books I’ve read, the Wonder Woman issue is my favorite. Jim Lee’s re-design of her was interesting, and that was also his first WW re-design that brought pants into her wardrobe.

If anyone’s new to this material and would like to explore it, “Just Imagine Stan Lee Creating The DC Universe Book One” is due for release on March 11th at comic stores, with a March 17th release at bookstores, digital, etc.

There’s also an omnibus of the whole shebang, as well as two softcover trades that served as the original trade run of the series. The individual books are long, long out of print but are fairly easy to obtain, and the omnibus is likely OOP as well, but again should be easy to track down.