Who has read and loves the original watchmen graphic novel?

Watchmen is my favorite graphic novel hands down, the existential and real message on superheros has stuck with me. I just wanted to know if anybody feels the same way as i do.

While it’s not my favorite comic of all time or anything, I really appreciate the way it uses the medium of graphic novels to convey a story. The symetrical panels and overall artwork are beautiful. The graphic novel is really the only way to appreciate the story. While I give props to Zack Snyder’s effort (and I’m excited for the HBO series), the story was made to be read and enjoyed in the pages. It is the only comic I know that uses the “limitations” of comics and square panels to it’s advantage. (And don’t even get me started on the use of fonts to show the decaying sanity of characters lol). So yeah, while it’s not my favorite, it is historic and justly praised for it’s ingenuity. 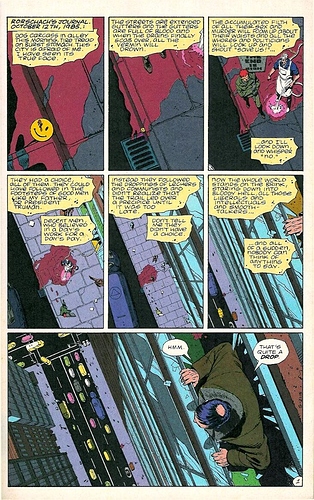 Gotham by Gaslight and Camelot 3000 are my favorites, but Watchmen is third on my list. However, it is THE graphic novel I think everyone should read and the one I always recommend to someone new to comics or don’t think comics is a serious medium.

It’s in Time magazine 100 best novels of all time list for a reason.

I not only read it as a graphic novel, I read it as it came out monthly (more or less). It was a thrilling time to be into comics.

Ia read it too when it was coming out.

I think there were delays but nothing as bad as the delays we have today.

There were delays on the individual books, but in the end it was worth it.

What I’m about to say is basically sacrilege. Watchmen is overrated. The ‘60s (and even the ‘70s) were the years in which superhero comics were fun, bizarre, extravagant fantasy stories without much of a guiding message. I’m partial to the Silver Age myself, but after twenty years of that kind of storytelling and those attitudes, it was really only a matter of time before someone decided to take superheroes back into the pulpy underground from where they were born. The wave of “dark” superhero comics started with Denny O’Neil and Neal Adams. Their work on Batman and Green Lantern/Green Arrow was practically a prototype of what Watchmen would try to accomplish years later: that is, of course, eternal relevance. The problem is that if you’re writing something with specific attitudes and issues in mind, it will always be a product of its time. SNL skits are funny because they’re prescient, that is, they mock current events. The same skits viewed by an audience a decade later will not be funny. Watchmen is similar. It’s an extreme reaction to a type of story that it deemed unnecessary. The problem is that now we live in an era where “superhero comics that examine the need for superheroes” is practically a genre of its own. Watchmen birthed a movement of cynical superheroics. It forever re-wrote what a superhero comic should be. But the question then becomes: is it revered because it is good, or is it revered because it came out at the time it was needed most? I think on a technical level, it holds up. The sequences of panels work well, and the art by Dave Gibbons is absolutely gorgeous. The story flows naturally, and the pacing is consistent. But the meanings, the attitudes. These are so of their time as to be almost grating, especially now that a story like this is the rule, not the exception. It’s message no longer comes in a time where it’s needed. It’s attitude is no longer revolutionary. It was good for a time, but its quality is not evergreen. In the end, all I want people reading this to consider is whether Watchmen was good, or well-timed.

I hear what you’re saying, but I truly believe Watchmen is good. All of your points are correct, except that the message is limited to it’s time. I disagree with that. I believe the message works even better today than it did when it was first written, and it’s a story that still needs to be told. The world is at an uneasy and uncomfortable place in history. Everyday feels as though another war is just moments away. People are locked in cages and love towards one another despite our differences seems next to impossible with the extremist and black and white attitudes people take with their beliefs. Compromise has slipped from our vocabulary. Each character’s moral compass and the issues that come from them are still present in people today. And even if that weren’t true, just because something has a dated message, it doesn’t make that message any less meaningful or necessary. At the very least, it can serve as a reminder of how far people have come, and that we need to maintain the progress we’ve made.

@Batwing52
Everything is a product of its time. The same argument can be applied to TDKR, Batman Year One, The Great Gatsby, and insert_story_here.

Comics fans have become desensitized to the message and impact of Watchmen, much for the reasons you state. However, for those folks that aren’t “into” comics, Watchmen is a good place to point them to so they can see the impact a comic have.

I’ve said it about COIE and it applies to pretty much every comic. When you read it, imagine being in that era. When Denny&Neal has their run on Detective and GL/GA, for its time, given the entire sociopolitical structure of the times, it was groundbreaking. When COIE came out it was ground breaking, it was an idea nobody had ever attempted before. Watchmen is the same way.

Sure, Watchmen is a product of its time, but, everything in pop culture is, and comics are part of pop culture.

@DeSade-acolyte
Absolutely. I really don’t want this to be a “Umm… Watchmen is actually bad” thing. I’m just trying to point out that it’s flawed like every other work of art.

@Batwing52
I don’t think that being a product of its time makes it flawed. If that is the case, than everything is flawed. In which case, it doesn’t matter, because everything else has the same issue.

It is true that Watchmen, TDKR, and of few other books that gave us the Dark Age of comics. And their impact can be seen to this day. So I’d invert the question, since modern comics often draw the same parallels as Watchmen, is it not those comics that are flawed and Watchmen isn’t. (In that context).