Who do you think is a better love instersted for Beast Boy, Terra or Raven?

do you think they should bring back Terra, or forget her Raven is better?

Are the Cartoons & good titans good portrayals of his relationships?

We will have to see the chemistry first.

In the cartoons, Beast Boy mostly annoyed Raven, though he saved her life at least once.

In the original New Teen Titans, He was much younger than Raven.

In the latest Teen Tktans comic, she liked Kid Flash.

From a special effects viewpoint, Terra would be very expensive, unless she threw pebbles instead of flying on rocks, creating rock structures, etc.

Besides we know the plot already, the surprise that she is a traitor is gone.

In another thread, I suggested that another character take that Role if we do Judas Contract.

Someone less expensive, who has a shady past.

I am thinking of Artemis.

Raven and Beast Boy share a relationship in a comic, but I do not recall the name. It doesn’t end well, but they are still close friends.
I think the cartoon does a better job, but I was not fond of the finale. More of a dialogue should have been included, but that also depicts some realism where we never truly get closure.

I mean- Terra is a straight up traitor, and pure evil at least the original version, and still a traitor in her most “heroic” adaptions. So really there’s no one WORSE for him. A big chunk of his arc is coming to terms with he was in a toxic relationship. He’s so deprived of love, his parents died, his adoptive parents abused him, Steve Dayton neglects him. Then Terra used his need for affection and hurt him more. Blackest Night brings closure to this.

Anyone remember that Jillian girl in Doom Patrol? She always seemed nice. Gar should end up with anyone OTHER than Terra

I’m cool with either, cuz I love Terra, but Raven is a better match

Raven. Terra’s too rocky, unreliable and sketchy. Raven seems to be more dependable.

As an old school fan, the Gar/Rachel relationship feels unatural to me…although I dig their chemistry on the live action Titans show.
Terra/Gar is self destructive. I prefer him with someone like Jillian Jackson. You never forget your first love.

Jillian. Beast Boy and Raven were never a couple until more recently.

Beast Boy is more talk then show in the comics with women. He did go thru a stretch when he was a tv star that women were all over him tho. I think I’m safe in saying he’s the biggest flirt in the DCU for a male. He’d probably say Terra to your question. Even after she betrayed them he never stopped defending her. Him & Raven are like bro & sister, & Starfire & Donna are true pros at how to brush off his flirtatious advances.

The fanboy in me prefers terra.
Jus being honest

I feel like Gar and Rachel balance each other out more. “Opposites attract” certainly applies to them. 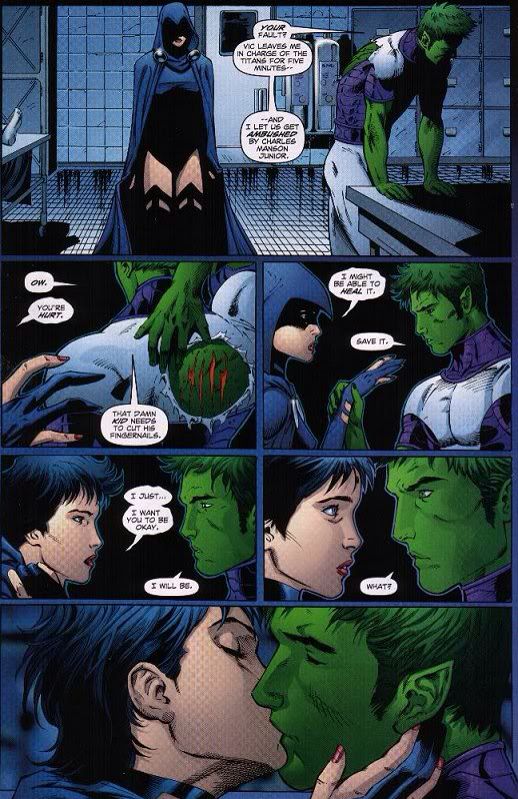 I just read that the other day during my TNTT full run reading. Yeah, there’s definitely some odd matchups in relationships in the DCU from time to time.

Ah, jeez. The fan base suggestions of the idea that Raven and Beast Boy are still even a complimentary match. Just consider really hard about that:

Satan’s hybrid prodigy offspring raised by elite interdementional monks as well as being second in command of Hell being paired up with a goof.

Yeah, you’re going to have to diminish Raven’s most competent attributes for that to happen. (TTG: I rest my case). Pairings with very little to nothing in common; I don’t buy 'em. But fine, since people still eat up that overhyped ship, DC is still a business and they can do whatever. I just want good plot fodder. Romance is usually a short-lasting by product.

Son of the Bat/Grandson of the Demon is a better fit. Shoot me.

I really loved Terra and Beast Boy’s relationship in Judas Contract. I like him with Raven too but they’re kinda polar opposites.