Who Could Had Replaced Cyborg in the New 52 Justice League?

I know the title of this topic says it all already, but I would like to clarify that I love Cyborg as a character and think that in normal circumstances I wouldn’t mind having him as a member of the Justice League. Given time in the titans before transitioning into the league, that kinda situation.

While I appreciate the spotlight writer Geoff Johns had given Cyborg to appear in more media including a live-action movie, if where honest, Cyborg role on the new 52 team is really underwhelming, underselling some of his best qualities from the titans to make him a pretty boring science guy on the team, and Cyborg should never be boring. To me, he was important, but only as a excuse for boom tubes and darkseid plotlines.

Made me consider that if Cyborg wasn’t chosen as a member of the league, who would have replaced him?

The obvious answer would be Martian Manhunter as he was a founding member in most versions, but from what I understand about John’s logic, he wanted a member that was inspired by the super friends tv show members, so using that mindset, I definitely would have pick Firestorm(Jason Rusch) as the original member in the new 52 Justice League. Alongside being a teenager, the guy is a cosmic powerhouse and would be pretty important for a guy like Batman to have someone who could make gold Kyptonite in case of emergencies.

Pretty much anyone else would have been preferable. 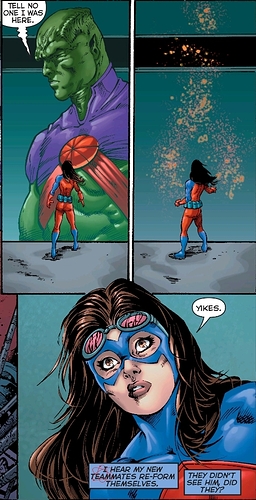 I like Cyborg. I like his power set. I like that he can hack into anything and control any machine. I like that he is always “connected” and all information is at his finger tips. I like the canons he grows out of his arms. Granted what I’m describing is probably more akin to recent “tech/info God” incarnations, from New 52 and ZSJL, but I like that Cyborg a lot, and the unique power/skill set he brings to the league. Plus he looks super dope (yeah that’s the kid in me speaking). I wouldn’t mind seeing him be an integral part of the team again, or have his own series for all that matters.

As for who I would like to see instead of him in the league? Assuming we have the standard 6 of the Trinity, a GL, a Flash, and Aquaman, I’d probably want to see another female character. Maybe Zatanna to give a magic boost to the team.

I love Cyborg, but his history and relationships are all with the Titans. Take him away from that and he doesn’t have nearly as much to work with. Not nothing, but it’s pretty hollow.

I’d say someone with clearer League connections, or at least less to lose by being associated with the League from the beginning, is ideal: Black Canary, Red Tornado, Zatanna, Vixen, Doctor Light II, and Black Lightning all strike me as stronger candidates for various reasons. or just use vibe, you cowards

I’ll add the caveat that I’d have replaced Aquaman instead of J’onn, though. Or preferably neither, but people are really hung up on the Justice League having exactly seven members for some reason. But if somebody’s gotta go, I feel like Aquaman neither has J’onn’s personal connection to the team nor the other five’s general A-list status, and plenty of strong lineups got along fine without him.

I love Aquaman in the League, but he is the kind of character where it would make perfect sense for him to leave or not work with the league, since he’s from such a different world and has very different responsibilities.

Depends on characterization. Sometimes Arthur is duty-bound and mean, other times he is written to be like his dceu counterpart where he is care free, and fun. His responsibilities to his kingdom is like all over the place, especially now that in continuity Alantis is no longer a monarchy. But I agree in some degree about Aquaman.
It’s why I like young justice where he resigned the role of Aquaman to Kaldur’ahm, a fitting exchange to the series best character.

Yeah, that’s kind of what I mean, it just depends on how he’s characterized. When he’s depicted as not caring at all about surface dwellers, he seems really similar to Namor.

Strongly agree. I like a JL with expanded lineup. In my head, I prefer the original 6 to be there, then add everybody else.