Which Versions of Knightfall Should I Purchase?

I apologize if this is not the proper thread for this post ahead of time.

I really want to purchase the Batman Knightfall omnibus which is separated into 3 parts if I remember correctly. However the trade paperbacks are way cheaper and there are a lot more, and I’m honestly getting a little confused. Is there anything missing from the non omnibus versions that I should be aware of? Also how many trades are there exactly? So far I have found 3 Knightfall,one pre Knightfall,troika, 2 knights quest , and knights end.

Welcome to the Community @Weebrat94! Awesome that you’re looking to purchase Knightfall! I don’t have any advice but maybe @javitru could help?

The “threat” versus “thread” misspell caught my attention. Lol. (Don’t worry, you can edit/update.) Also, totally the right spot.

First of all, Welcome! Second the TPB’s that look like omnibuses don’t collect everything, However they collect almost everything you need to know, there are smaller TPB’s but the are a little more expensive because they are finer paper. So here is how I would buy them

@Weebrat94 I TOTALLY recommend the most recent 25th anniversary trade paperbacks if you want to get the most complete picture of this sprawling epic! It’s collected in NINE volumes (worth it). They are-

Now, one could argue you could stop with KnightsEnd as Azrael gets defeated and Bruce reclaims the mantle, but Prodigal is Bruce’s hand-off to Dick while he processes all that happened and Troika is Bruce’s full return after all that’s happened. 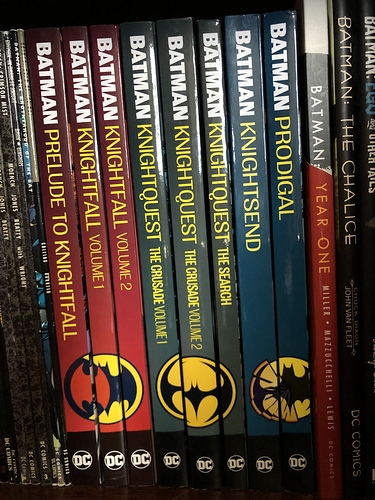 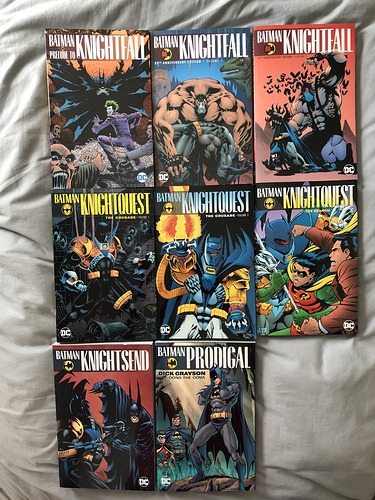 Sorry, guess I never took a photo from when I got Troika, but basically this is what you’re looking for!

I’m pretty sure that the 3-volume omnibus contains every issue that appears in the 9 paperbacks.

Have you read this storyline before? You can read the whole thing here on DC Universe. That might help to inform your decision on which parts you want to own, which in turn may determine if you want to buy the entire story in omnibus form, paperback form, or a combination of the two.

Whoa! You have Batman Ego hardback just like me, @javitru! It’s one of my absolute favorites. Do you read yours a lot?

Wow thank you all for the warm welcome. Also thank you all for getting me up to speed on all the collections in Trade and Omnibus. I’m happy to see the trades are a good way to go. I like Omnibus but they are so much more expensive. @AlexanderKnox to answer your question, I’ve read everything from Batman 408-489 along with Detective comics 615-658 here on the app. Between that and my University homework during quarantine my eyes outright hurt XD so I’d like to get Knightfall in print in someway shape or form. I also just snagged the first omnibus for the Kelly Jones Doug Moench Era.

Congratulations on the find! Omnibus for Kelley Jones Doug Moench is amazing! I completely understand the eye pain and hope you can find a physical copy of Knightfall soon @Weebrat94. Good luck!

@KeyFamily I love it! I’ve read Ego more than Selina’s Big Score, though. Even though I had it for a while, it took me forever to set aside time to read it (SBS, that is. Ego I’d read a long time ago). When Cooke passed, I poured myself some whisky and sat down with it. Loved it immediately!

This is awesome information. I recently purchased Knightfall Vol1,2, and 3 and preparing for the long read. I wasnt aware of the “smaller TPB’s.” I will look them.

Backing up @AlexanderKnox. It’s all on here and looks very good (most scans). If you’re wanting it for display purposes I’d go with the omnibus, but I find them unwieldy. I had KNIGHTFALL in trade. I think the page and print quality is equal to the omnibus. It all depends on what you’re wanting from the purchase.

P.S. As one of the few Azrael fans I’ve spoken to on here I feel the need to recommend Azrael’s solo by O’Neil. It ran 100 issues and was (for my money) very solid throughout. I didn’t care for the art at first, but it changes for the better after a while. I really love the Dr. Thompkins and Orphan relationship he forms in No Man’s Land. He’s a terribly underrated character and it’s a terribly underrated series imo.

Only thing to note with these are that some overlap, so be aware that you can skip some issues

I don’t own this story, but when I read it, it was in three large trades, about two inches thick. I got them from the library, so I don’t know how much they cost, but it worked fine for me. I haven’t read the new nine volume edition though, so I don’t know what I’m missing.

Here are the editions I read: 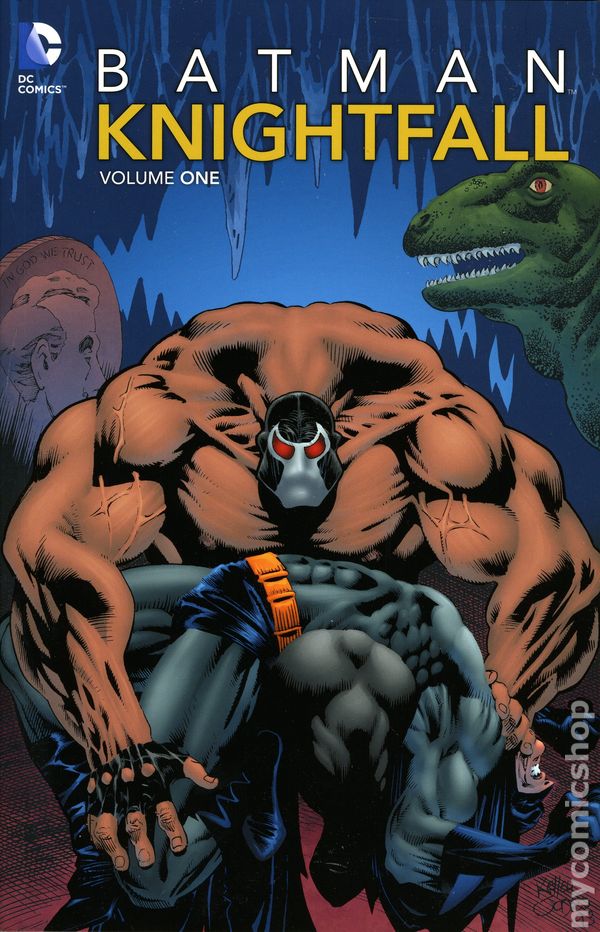 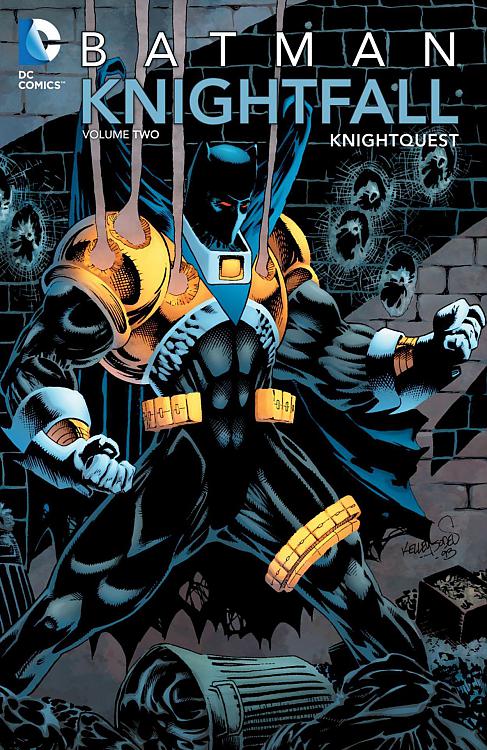 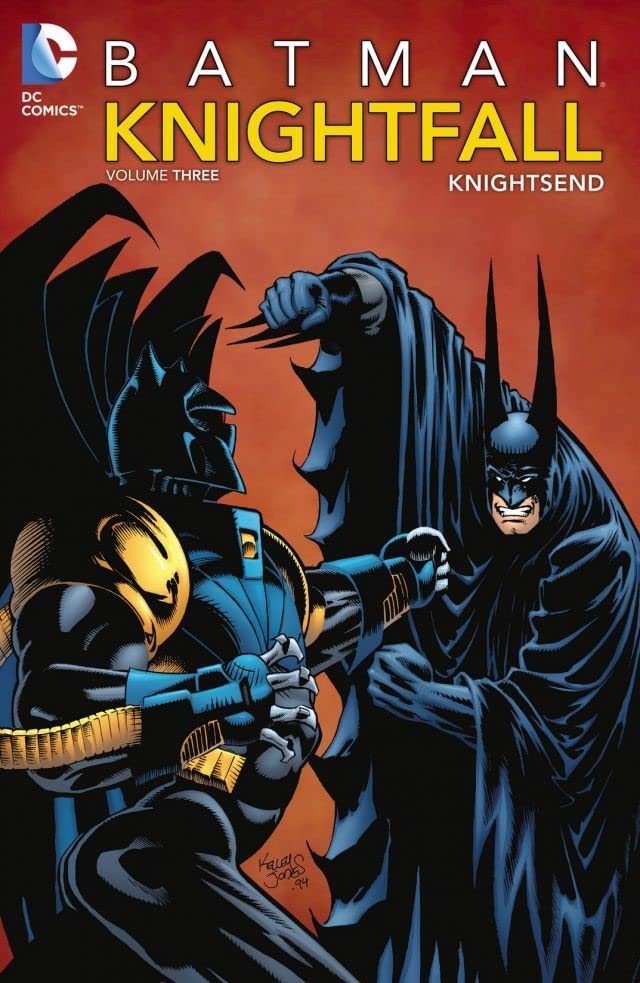 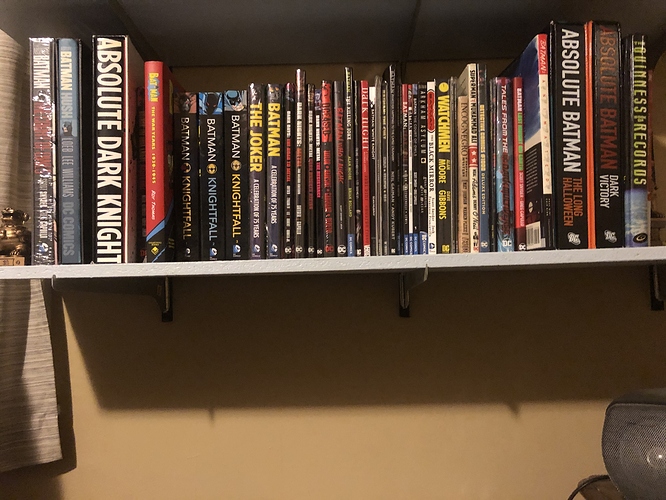 I love Azrael. Big fan of his solo stuff when they finally iron out that he wasn’t a vicious madman. Very human character to me. So… What is up with that Sports Illustrated Swimsuit Edition pose on the cover of volume 3? Jones was a weird artist for me.

Well, you know. Every good artist has one really bad drawing.