📚Which Underrated Series Deserves An Omnibus or Absolute Edition? 📚

With so many important and entertaining storylines and characters, choosing what to collect next is a heck of a task! What collections have you not seen that you’re patiently waiting for?

Tell all in the comments below!

Alright, I love a good Omnibus and Absolute Edition so here are a few I would love to see happen

Triangle Era Superman omnis (aside from Death & Return, which has already been done).

Omnibus:
the Spectre by John Ostrander and Tom Mandrake 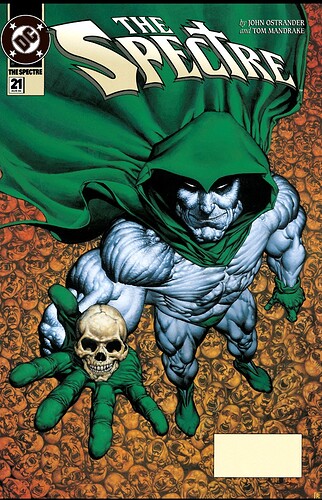 Absolute:
Superman Up in the Sky by Tom King and Andy Kubert

I don’t care what, just please collect it:
Steel by Christopher Priest 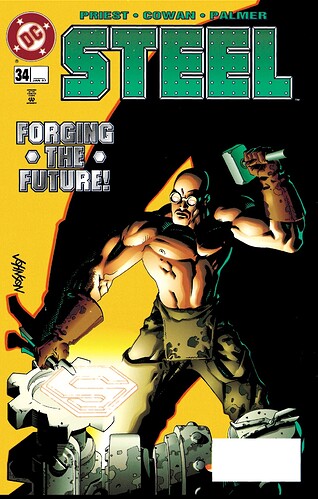 I know it’s not underrated (well maybe depending on who you ask), but I’m desperately hoping we don’t have to wait too long on Absolute Doomsday Clock, mostly so that we have a single hardcover version of the complete story

God, the list of nasty things I would do for a Denny O’Neil Question omnibus. I’ve waited so long.

So have I, I want to read it but I’m still hoping that they will release it in a great omnibus soon. If they don’t make it, then I will just read it on here.

I’m think more of a re-release, the omnibus’s haven’t come out in years and only collect a few issues. I’m thinking a newer omnibus that covers more in one and is more easy to get instead of paying a great amount for one on ebay.

I’m not sure about the reprinting process, but couldn’t an Omnibus reprinting content from DC All-Star Comics Archives just copy from those pages if the original are unavailable?
If so, then reprinting Archives into Omnibuses would be cool.

There could be a new style to Omnibuses that collect first appearances of characters starting from A working to Z.
Or, can take the Marvel approach and reprint based on year. The idea of collecting series like Detective Comics was neat, wish that omnibus went through.

For today’s readers, a lot of Golden and Silver Age (and some Bronze) stories are underrated.

Roy Thomas’s “Nostalgia-verse” trilogy: All-Star Squadron, Infinity Inc. and Young All-Stars. Three pretty-major '80s series that have gone properly uncollected for the most part. The first 18 issues of All-Star Squadron have only been collected in black-and-white in a Showcase volume, with a few later issues in color in the “Infinity, Inc.: The Generations Saga” hardcover that came out 10 years ago. Only the first 4 issues of Infinity Inc. have been reprinted, also in that book. And Young All-Stars has never been collected or reprinted. They’ve all been digitized, thankfully, but it would be nice to have them all (or at least more of them) in an official book.

Some recent runs that deserve the omnibus treatment:

Chuck Dixon’s run on Nightwing DEFINITELY deserves an omnibus!
Really that’s all I got. I haven’t read that many different series or runs and not really any of them (out of the one’s I’ve read) deserve it that haven’t already gotten one.

Well, in dreamland I would want DC vs Marvel omnibi (I made that a word) or a few Absolute versions. They did a tpb of the classic crossovers but I don’t think anything after DC vs Marvel.

JLI vol 2 omnibus recently came out and the next batch of issues involve the writer who shall not named so I’m afraid they won’t do a volume 3 but that would be my biggest want. With the JLE crossover issues inserted in order. Sometimes it seems like omnibi gather issues but don’t sort them well.

Omnibi for: Eclipso The Darkness Within and Armageddon 2001.

Well, in dreamland I would want DC vs Marvel omnibi (I made that a word) or a few Absolute versions. They did a tpb of the classic crossovers but I don’t think anything after DC vs Marvel.

I’m actually having a custom omnibus made from this series. DC vs Marvel 1-4, all 24 Amalgam issues, and Unlimited Access (had to choose which to include, and I feel Unlimited Access is better than All Access). Progress has been sloooow, so who knows when I’ll actually get it, but when I do I’ll share pics.

The progress so far: 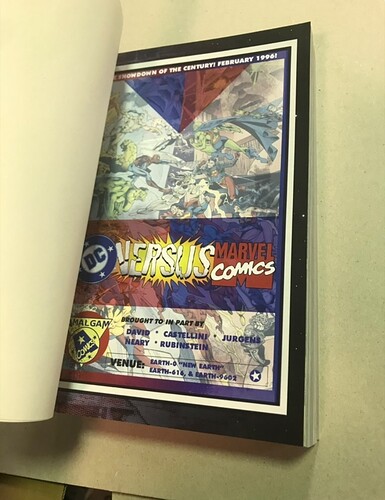 That’s awesome. I’ve always wanted to try that but can never think of issues that equally matter enough to collect and don’t matter enough that I will cope if it doesn’t turn out well.

I hear you- this is only the 2nd one I’ve ever attempted, but for each one I seek out and buy all new issues. So if for any reason it goes haywire, I still have my original copies.