Which DC Characters Are The Top Martial Artists?

I would Love to hear everyone’s opinions on this

I have gotten the feeling that Lady Shiva might be the best. But this is a question not in my area of expertise.

I actually ranked them not that long ago going by who beats who in comics and actual rankings in canon. (HCQ helped with one part, thanks as always Q!)

Things start getting sketchy below this. Bronze Tiger, a few of Batman’s teachers, the League of Shadows/Assassins, Black Canary, Wild Cat and a few others are all up there. Depending on the time Batman may rank lower but the top three are given (eg. golden and silver age Batman was more of a detective). Also how you define “martial artist” changes things. Brainiac knows martial arts (I assume) but I wouldn’t consider him and DC has a large number of boxers (Wild Cat and Muhammad Ali for two).

Connor Hawke used to be one of the best in the DCU, but post-Flashpoint I’m not sure he even exists anymore.

I was considering Cassie too, but I struggled to convince myself that her premonition can be considered part of the martial arts skill.

While they are selling her premonition as non-meta, it is in my opinion at a meta level. Sure, being aware is part of the martial arts skill. But if someone has trained durability so much that they can’t be felled by punches and strength so much that everyone falls on one hit and it is at a meta-level but we say it’s non-meta. Can we still claim that person is the best martial artist if it wins in a fight?

I couldn’t decide, but in the end I ended up personally giving my ribbon to Shiva.

I would say Bruce Lee and Chuck Norris.

Cassandra Cain, Lady Shiva,Black Canary, Bronze tiger, Karate kid all come to mind but for me Cassandra will always be the best

Come on-Karate Kid. I mean, he’s a master of every form of martial arts to have been developed by the 31st century. That means he is thousands of years ahead of anyone walking the earth in modern times

While they are selling her premonition as non-meta, it is in my opinion at a meta level.

That was basically confirmed in Batgirl (vol. 1) #14, after thorough blood analysis showed no meta-gene, but all other data on her was more or less on par with meta-abilities.

I would say Bruce Lee and Chuck Norris.

That same issue had one guy refer to Cass as “Bruce Lee on crack”.
Take that as you will.

Whereas the meta-gene could be considered a “cheat code” of sorts, Cassandra earned the ability through–I guess the best gaming term that fits is “grinding”. It’s a honed skill, just like a punch from Shiva, Bronze Tiger, Kyodai-Ken (that’s right, TAS reference!), Batman, King Snake, or many others is a specially honed and targeted punch, intended to be more effective than an untrained street brawler.
When it comes to “the best”, that can be kind of tricky. For example, Cass lost to Shiva twice, then beat her shortly after the second loss. After that victory, she was overpowered by Monsieur Mala, and toward the end of her comic, her half-brother. She tussled with a meta that looked like a giant pig-man, and her initial attacks didn’t do much.

I’m not one of the number crunchers from Death Battle or anything, but I’m safe saying Cassandra is number one in my heart.

the Original Karate Kid (by a mile).

I guess if we’re going by present day however not sure but here are some notable names. Cassandra Cain (my personal favorite), Lady Shiva, Bronze Tiger, Black Canary and Batman. (I notice a lot of Richard Dragons in other people’s lists. Personally havent read too many things with him in it so I can’t put him on my list)

I forgot about Karate Kid, but Bats took him out in Meltzers run on Justice League.

My take on Cassie’s ability is that, because of her upbringing, her “native language” is body language. Many fighters train to recognize when their opponent is “telegraphing,” unconsciously giving away their moves in advance. Gamblers do much the same thing, looking for their opponents’ tells while cultivating their own poker faces. Trained interrogators look for microexpressions and give-aways. What Cass does is this, taken to an extreme.

In the real world, some people have learned to echolocate, and some people can multiply two twelve digit numbers in their heads in a second. They don’t have a meta-gene, either. They just have neurological systems that, for whatever reason, work differently than usual.

Other top candidates are Richard Dragon, Bronze Tiger, Connor Hawke, and… I’m going to go a little outside the box here and mention Wildcat and Judomaster. They have their specializations in terms of styles but are really good within that context. Black Canary is in this general league as well.

I don’t buy Batman being even in the top ten. He’s good, sure, but he’s too good at too many things to have the time to master martial arts in this sort of specialized way.

I don’t know much about Karate Kid, but my understanding is he’s basically Cass, but moreso. So if we’re counting the future, then I guess he counts. 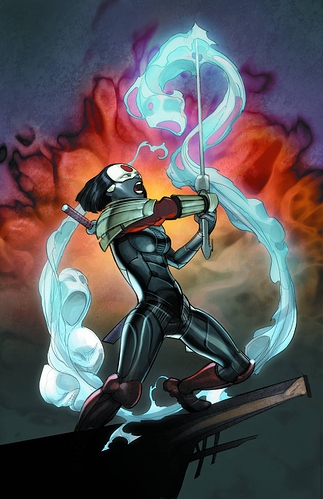 Since familiarity with weaponry, especially sword fighting, is a major element of martial arts mastery I’d definitely place Katana high on the list.

Once you get to a certain high level of ability, it can become kind of ambiguous as to who’s better than whom.

There was even a storyline in the Green Arrow book when Connor was GA that featured a competition to determine who the greatest martial artist in the DC universe was. But, like you wrote, does Connor Hawke even exist anymore?