Which Comics Have Left A Profound Impact On Your Life?

For me, it’s always Gotham Academy. It was my first comic I really enjoyed. And it came at a very traumatic time in my life, I saw so much of myself in the main character Olive Silverlock, and was a huge source of catharsis for me.

In my adult life, Saga of the Swamp Thing by Alan Moore has also left a profound impact. Something is so almost biblical about the way he wrote that book, and so many of the sentiments in that book has impacted me for the better.

The Dark Knight Returns. It turned me into a deontologist. It got me out of my unemployment slump, and I quickly got a job at Wal-Mart. It helped me to look into night jobs, and sure enough I work overnight. It has been a constant inspiration to keep working during a pandemic.

The Killing Joke basically gave me a love for comics. It was the first comic I ever read and it blew my mind. So good and deserves all the praise it gets.

American alien helped me embrace being American(specifically the last page)

That would explain your name! Haha

I think like a lot of people, it would have to be my first. Action Comics #826. Captain Marvel AND Superman!? Need I say more? 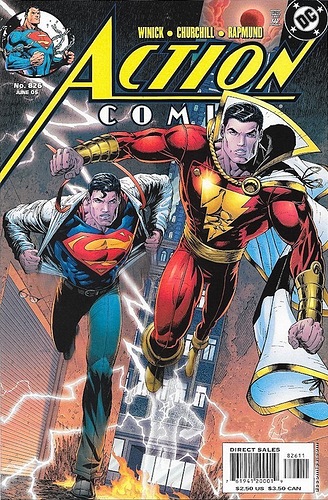 And my more thoughtful answer would be Lex Luthor: Man of Steel by Brian Azzarello. It’s a complex exploration of Lex Luthor’s motivations, and it really adds depth to an often one-dimensional villain.

In a weird way, it helped me learn to be more empathetic towards people with whom I disagree. They may be wrong or misinformed or misguided, but it’s more likely that their actions are motivated by their own fears and insecurities and not simple malice.

This may seem like a stretch, but it’s what I took away. Always try to see things from your “enemy’s” point of view.

Wow, a lot of Great choices here folks. And, I’d go with “Dark Knight Returns” or “Killing Joke,” but those books are already well represented, thanks @MatthewHecht and @TheSandmanofGotham!

I want to say “Crisis on Infinite Earths,” because I’d never read a series quite like that before. Ok, “Marvel’s Super Heroes Secret Wars,” was amazing, but not nearly as Universe shattering, those series showed me what comics could be on an epic scale as a child.

But, if you want to get personal, I guess, that I’d have to go with,

, “Watchmen.” Ya, gotta admit it’s kinda boring, and typical, but that series blew my mind! I was too young to read it when it came out, but my brother is eight years older than me, and we made a deal. I’d pay for the comics out of my allowance. He’d actually buy them, cause Mom didn’t want me having them. He’d get em, read them first, then pass them on to me for my collection.

He didn’t like them, because he didn’t understand them, neither did I, but I knew they were something special, something different. I read and reread those issues. Then, when I was a little older, I got the Collected Edition, and read that over and over, trying to make sense of it. I have to say, that book changed my life.

Not only altering my view of “Superheros,” but also, a nice introduction to the harsh realities of life in general. Kind of like “The Dark Night Returns” and “The Killing Joke,” and as I got older, I realized how much these series introduced me to story telling and character development. The '80s were a darker time in the industry for sure, but boy, we got some great comics!

Oh wow that’s such a great story, you and your brother pulling off a mini heist to get you some comics! Haha

I don’t know that it “changed my life”, but this series is what got me into the comics side of the DC brand 32 years ago.

That is a great series! I reread it a couple of months ago, and it holds up well.

SAGA OF THE SWAMP THING for sure. I used to sneak down into the cellar to read the issues when I needed a break, complete with rotisserie chicken to snack on. I enjoyed Rick Veitch’s continued work on the series following Alan Moore.

I assume we’re talking DC comics here? Because I probably have a few non-DC that had bigger immediate impacts on me.

But within the DC world, one I return to is Starman. Not so much as a lightning bolt, but something I continue to take something out of when I reread it. It’s like it ages with me. His meditation on fatherhood near the end of the series is perhaps the most recent takeaway I think about frequently. Continually taking something new out of a work is probably creating a bigger lasting impact than any “a-ha” moment for me.

All good choices, that Spectre run is great. I’ve been slowly going back through it on DCUI, and it holds up well.

I don’t think any have had an impact in a way that changed my life but Shadow of the Bat #13 is the earliest I remember a comic getting to me and those last 2 pages still do. Plus it has some classic Breyfogle art.

My first real comics experience was a Death of Superman TPB, though I think the follow up World without a Superman/Funeral for a Friend (also in that link) made me love the character even more.

Supergirl: Being Super always gets me. There’s a really emotional part that makes me tear up.

More recently, I’ve been really inspired by Superman: Up in the Sky.

Doesn’t have to be DC! But also that’s all great to hear

Jessica Cruz just in general, but especially that issue where she’s doing all her super hero stuff and her anxiety messes with her and simon like aren’t you over this, and she explains it to him. like where everyone thinks your doing great but in your head its a battle to even leave your room, I get that. my issues are more depression with bits of anxiety but Jessica really inspires me.

I’m sorry you deal with such issues, but it is nice to see that you have found some solace within Jessica. For me, Dick Grayson helped teach me that I had to carve my own path in life… something different from what other people were doing and what other people wanted me to do. And that this was totally okay.