Hello, I’m new here, so I thought a fun question for discussion to help me get familiar with the board. What voices do you use in your head when you’re reading comics?

For mine, I use the following

What voices do you use for head while reading comics? Any unique choices?

Christopher Reeve for Superman
Dean Cain for Clark Kent
Clancy Brown for Lex Luthor
Teri Hatcher for Lois Lane
Jack Larsen for Jimmy Olsen
John Hamilton for Perry White
Eddie Jones and K Callan for Ma and Pa Kent
All the above voices might waver from time to time when I am reading comics, but the ONE voice that always comes through loud and clear is Kevin Conroy as The Batman/Bruce Wayne.

She was willow on Buffy The Vampire Slayer

Conroy for Batman
Hamil for Joker
Sorkin for Harley.

There are alot of actors/actress’ and voice actors who have portrayed your favorite hero or villain.

So when you’re reading the comics of your favorite hero or villain, whose voice are you hearing?

I make up those voices in my head. This is how I would read them out if I were reading them to my son.

Mostly my voice but for those iconic characters I hear their voices.

It’s so weird that you ask cuz I love to read but I NEVER hear the voice of any character. It’s so weird to me cuz I feel like most people would.

No, I take pills for that.

I never take pills for that…

Seriously, I’ll hear voices of characters if they’ve been portrayed by actors I’ve liked, or if there’s some similar character that I can link to.

That’s a tough one, there’s only few that stick out in my head. Christopher Reeves will always be Superman in my head. Mark Hamill’s Joker has permanently replaced Jack Nicholson, and of course, I AM BATMAN!!

You hear them too!? They all said I was crazy! Ha! That’ll show them all! What? No. Why? Well I know that and you know that but they don’t! You have biscuits? 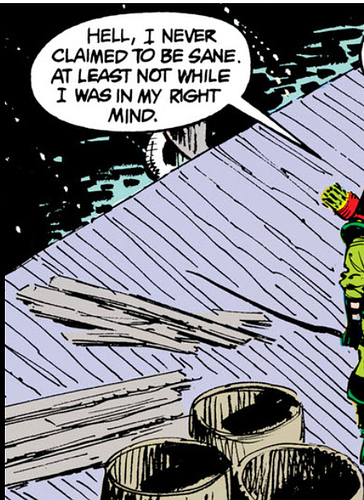 I do accents too.

I hear voices but sometimes the voices change based either on a newer actor taking over the role or the depending on how the character is presented in the comic. For instance, a regular Batman comic, I’ll hear Olan Soule from the Super Friends, whereas a An issue of Batman 66 I’ll hear Adam West.
Guy Gardner always sounds like Thomas F.Wilson
On the other hand, When I first read the Englehart/Rogers run of Batman, I hear David Ogden Stiers as Rupert Thorne instead of John Vernon