Where to Start With Batman Beyond?

With the new remaster, I’m watching Batman Beyond for the first time and am bummed that I didn’t watch this sooner. I wanted to explore this world some more but was not sure where to start in the comics. Some questions: (No Spoilers please!)

Can I just start at Rebirth?
Where do you recommend starting?
Should I finish the show first then read?
Is there a must read story arc you love?
Do you enjoy the comic series?

If you’re interested in comics based on the show itself, check out the following:

The very first BB comic, issues 1 and 2 of this mini-series adapt the first two episodes of the show, then go into new stories for the remaining four issues.

The very first ongoing Batman Beyond series, this book, like the mini-series before it, ably captures the tone and spirit of the TV show.

If you’re wanting to jump right into
the Rebirth era of Batman Beyond, you can. Just know that it does reference some things that have occured in previous Batman Beyond/set in the future DCU titles.

The items of reference aren’t anything you need to know before starting the book. You can begin with the Batman Beyond Rebirth one-shot, then segue into the series very easily and still understand what’s going on just fine.

Thanks so much @Vroom! Im interested to see more of Terry’s adventures. My only gripe with the series is that due to it being written at the end of the 90s it still has some of that classic 90s cliché moments. Like the jock bully and the flip phones

. Not that it takes away from the show but I was wondering if the new comics change some of that due to the times now.

While flip phones are out, bullies are still, sadly, in.

Thankfully, they get no exposure (so far) in the current Batman Beyond book due to none of the characters being seen in school environs. At least from what I’ve read of the series so far, that is.

Batman beyond 2.0 takes place after the show if you want good Terry stories in comic continuity futures end and rebirth are both good

@crimsonowl, I LOVE those Batman 2.0 stories! The identity of Vigilante was such an interesting reveal.

Forgot, I purposely didn’t include futures end in my order above b/c I’d already read it. I would’ve put it where it goes in that order, if I would’ve remembered that b4 now. It can go in all kinds of places with multiple comic storylines, so I’d probably read it between universe and 2.0 but u can look it up & decide where it fits best for u.

Ok. Took me forever to figure this order out. I read it all & it works perfectly. So here’s the order on-site ,all the way to the most recent issue of Rebirth, & site has everything on here so you’re not missing any by reading it this way. Also I put the dates as they appear on the site not as there listed on websites.

I’m doing a Batman Beyond read right now reading when he became a actual character in DC comics. I started at rebirth but i enjoyed it and wanted more so now I have a few books. Did some research before I placed them and own all these books don’t mind the numbers I have a reading list lol

I started to read this one today! Great reading! 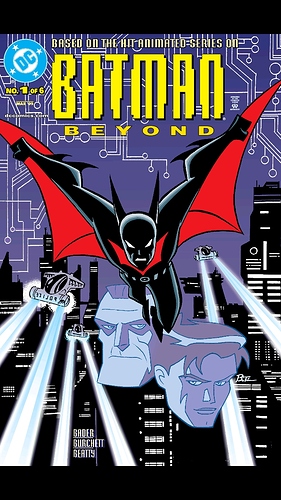