Where is Stargirl Fit in the Universe vs Other CW Shows?

They are all on different Earths.

GREAT QUESTION!!! and where might we find the answer?

Stargirl CURRENTLY has no connection to the Arrowverse.
In the new Multiverse, Stargirl is on a new Earth-2 (completely unconnected from the Earth-2 that was destroyed in Crisis) and everything that we think of as the Arrowverse is now contained on Earth-Prime.

There is always the possibility that Stargirl could crossover with CW shows in the future, and even that it may be folded into the Arrowverse down the line (though the latter is very doubtful).

As for it’s connection to Titans/Doom Patrol/Swamp Thing, those are all established to be on their own worlds, as well. Yes, even Titans and Doom Patrol, despite Doom Patrol first showing up on Titans (my own personal theory here is that there are two Doom Patrols… one on the same reality as Titans, that Gar used to be a part of and which has a different Chief! – and then the Doom Patrol from their series, who have never mentioned Gar, and who have Timothy Dalton–but that’s just me).

To be clear: Stargirl was finished filming before it was decided that it would be shared with the CW. Nothing that has ever happened in the Arrowverse has any bearing on anything at all that you will see in Season 1 of Stargirl.

Interesting… do you have a Link where I could read more on that? 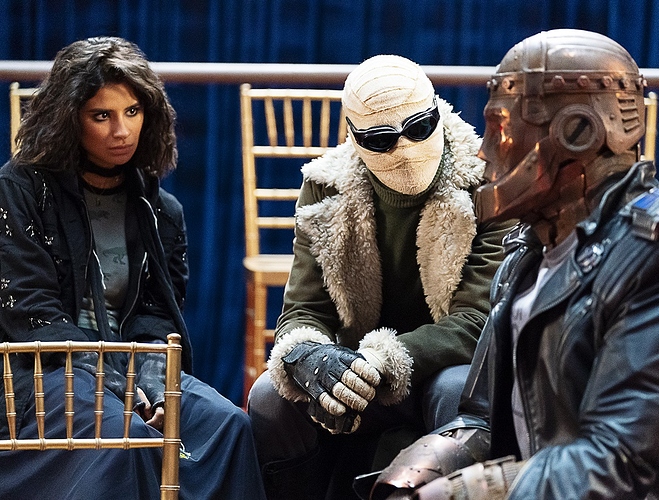 How the Doom Patrol Series Connects with Titans

If you watched the first season of Titans, you probably think you know the Doom Patrol.

Thanks! I’m gonna give those a read tonight!

Regarding the larger topic at hand, a series having been revealed to have a place in the same in-universe Multiverse as the Arrowverse does not make said series part of the Arrowverse, which, as a “shared continuity franchise” consists only of the following series (in production order):

I can’t tell you how many people I have had to argue this with. No one seems to get it.

@Stargirl-Aftershow-Podcast I know the feeling (re: arguing with people).

Series can be set in or occupy the same fictional reality without being part of the same franchise.

See Homicide: Life on the Street, Law & Order, and “One Chicago”, for example. Each is an autonomous, self-contained IP whose stories and characters exist within the same internal narrative world.

I hope Stargirl NEVER connects to the Arrowverse. It’s so good already, let’s not ruin it. Same goes for the other DC originals. Stargirl is better off on her own.

What I got out of the interviews is @stargirl-aftershow-podcast is correct then about being two separate Doom Patrols.
According to the new multiverse as set up by Crisis.
Earth 9 is home of the Titans. On that earth there is a version of the Doom Patrol that Gar was part of and then left with their blessing.
Earth 21 is home of the Doom Patrol we got the series on. April said this Rita does not know Gar. The Jermey and Sarah interviews even said that there are two versions.

However, it took until the “Crisis” for people to actually accept that fact because Doom Patrol the TV series was initially developed to be a spinoff of Titans following on from that series’ first season episode “Doom Patrol”, but when Jeremy Carver came in and started active development on the Doom Patrol series, things changed internally and the two properties (Titans and Doom Patrol) became separate things even though the general public perception that they were linked still remained.

Oh that’s true, I wasnt saying you were wrong. I just looked at @stargirl-aftershow-podcast theory and noticed that they were correct in that said theory.

I think people thought they were connected because of Titans. Even though Cheif was different and they never mentioned Garfield.
I’m hoping people will know the difference now. Especially after Crisis out them on 2 different Earths

I was puzzled why DC used the Pre-Crisis lineup for the 7 Soldiers of Victory (using Green Arrow and Speedy) who clearly aren’t the same characters from Arrow. Especially given that this whole issue has been resolved in the comics with GA and Speedy’s Golden Age versions simply no longer existing and being replaced by other characters.

This where they need to explore STAR and S.T.R.I.P.E.S. more!

A few possibilities I can think of

In the comics a key part of the back story is The Spider betraying the team. With him gone it tells comic fans that they are changing this and not to expect to see it adapted. It is similar to how Die Hard changed the name of the main character (and made him 40 years younger).

Green Arrow and Speedy look better in a group picture.

The creators have plans to use a Green Arrow completely different from Stephen Ammel.

It would fit into the idea of a multiverse and little in the show so far has been consistent with comic book canon anyway. Wildcat seems like she is more like Wolverine with those claws that can destroy metal. I never remember Wildcat having that power. And Johnny Thinders genie coming out of a ballpoint pen? Guess this must be Earth-SG.