Where is the conundrum that makes my life so entertaining? It says on the DC calendar that he would be here at 10am PT but that time came and went without even a puzzle from my good Nigma.

Y’all have no idea how much this means to me.

@Behemoth.Ravenlord, careful not to call too much attention to my whereabouts! I’ve managed a cunning escape, from which no measly moderator will be able to capture me.

But to satiate your appetites for a mind-enhancement, I will grant you this inkling:

A little-known cat burglar needs to be accepted to a thieves guild. After sneaking around notable areas for a few days, she gets a hunt about the location of the guild entrance down a dark alleyway.

After lurking the entrance for about an hour, the cat burglar sees that the thieves are using a password system comprised of a series of numbers. When someone approaches the door, they are given a number, and then they reply with a number.

Convinced that she has cracked the code, the cat burglar approaches the door to the thieves guild, and the guard tells her “ten,” to which she confidently replies “five.” The guard immediately slams the door in the cat burglar’s face, and a deadbolt slots into place.

What should the cat burglar have said?

I disqualified myself. hitches pants back down

Neither of these answers are correct.

Do your simple minds require assistance?

sigh If I linger much longer, I am sure to be spotted! Therefore I will provide a rare drop of mercy.

I think I have done this with my friends before, is it the number of letters in the word. I think that the answer would be three then.

We once did something like that on the Battlefront II Forum, which I am an active member of.

A-ha! A worthy contribution, @Behemoth.Ravenlord. “Three” is correct, as the call-and-response is in fact to recognize the number of letters in the guard’s stated number. Well done!

@The Riddler, can I ask you one of your riddles? It is in the image. 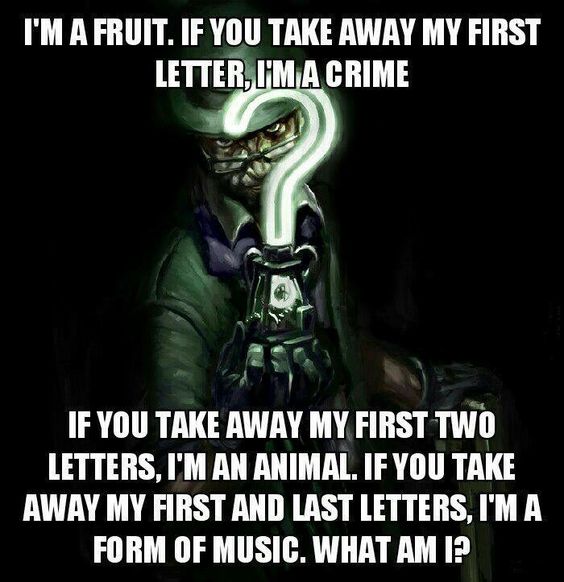 @Behemoth.Ravenlord, very well. But make it quick, I fear the pesky moderators may spot me and take me back to the asylum before long.

Ah yes, a classic amongst the Riddlerettes. This fruit also makes for a very fine snack. The answer is, of course, “grape”.