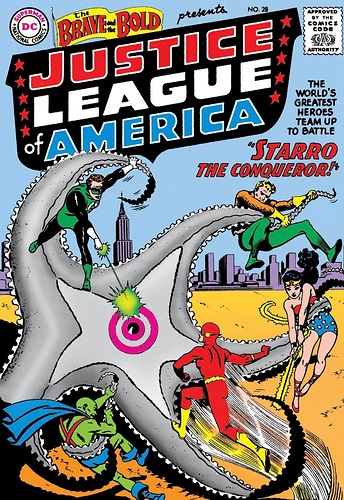 If you’ve seen James Gunn’s The Suicide Squad and are not so familiar with the weird and wonderful world of DC super-villains, you probably have some questions about the giant starfish. We get it, a day- glo colored kaiju starfish is a pretty strange sight, even in a movie that also turned Polka-Dot Man into a household name. Don’t let Starro’s appearance fool you, he’s one of the deadliest foes the DC heroes have ever faced, with a history that goes back generations. Now that we’re all recovering from The Suicide Squad, here’s everything you need to know about Starro…

What’s the Deal with Starro?

Starro the Conqueror is a giant starfish from outer space, with designs on world domination.

So, He’s Literally a Giant Starfish?

Not quite. Calling Starro “basically a giant starfish” is like calling Superman “just a guy in tights.” Starro’s abilities make him one of the most terrifying and destructive villains in the DC Universe. Starro is a powerful telepath, who can control millions of beings at the same time. As you see in The Suicide Squad, he does this by producing miniature extensions of himself that attach themselves to the faces of living beings, establishing a psychic link with them and allowing Starro to take control. The big guy has also cheated death by psychically transferring himself into one of his extensions or regrowing from a tiny spore. Don’t let his non-threatening appearance fool you, he’s nothing like that goofball who hangs out
with Spongebob.

When Did Starro First Appear?

Starro made his grand debut in 1960’s The Brave and the Bold #28, which was also the first appearance of the Justice League. In this Silver Age story, Starro arrived on Earth and planned to use his psychic powers to force mankind into detonating all their nuclear weapons. Humanity would become extinct, and Starro would absorb the nuclear energy to become more powerful. Needless to say, the Justice League had some problems with this plan and worked together to stop Starro. The League discovered that Starro had a weakness against lime and used it to defeat the fearsome conqueror.

To learn more about Starro, head on over to DC Comics!

Starro, do you love him or hate him? Let us know in the comments!

Starro, do you love him or hate him? Let us know in the comments

I love him in certain circumstances….definitely in the new movie

Starro ain’t nuthin’ to mess with. He (or she?) is super legit. Mm hmm.