When Does A Big Comic Collection Become Too Big For You?

I’m sure most of us have been there: we have a large collection of print comics that we take a great deal of pride in owning and showcasing.

Then your storage space for short and long boxes (or whatever storage method you utilize if something different) becomes a premium. Your interest in comics is strong, but a continued amount of room for them? Well, not so much.

Trimming down a collection and getting rid of comics you no longer read or have interest in is a good sign that you understand healthy collecting habits and don’t need to hoard everything for eternity.

I’m curious to hear your thoughts.

40,000 and I decided I didn’t want to move them again so sold the collection. Work interfered with me keeping track and reading all of them. But it was fun for 40 years.

Vroom the Mysterion, Master Magician and Master of Time:

The very existence of this question illuminates much about the overall culture we live in here in the USA as well as probable shared demographics of comic book collectors. Example: if I live in a simple agriculture-based third world situation I am not dealing with the issue of 100 boxes of comics. Ironically if I live in that lower economic rung situation I may actually be emotionally healthier (the premise of The Walking Dead’s story plot ending goal).

Not only are residences of the USA living a far wealthier lifestyle than most of the rest of the population of the world percentage wise, I am deducing that the slice of the USA population that can afford crises like dozens of heavy long boxes of comics has to be towards the middle to upper end of the USA economic demographic.

FYI, I’m not a socialist, but I am able to look in the mirror and realize

So, summation: While I still sit in a home office jammed with near-worthless comics from the past 30 years, I have at least stopped the inflow by only using DCU Unlimited, CU Unlimited and Marvel Unlimited. And guess what: I can’t keep up with even that, I am drowning in digital all you can read comics just like many of you have too many streaming services you can’t catch up on.

For now I am slowly selling off as much of my comics and graphic novels that are definitely on the Unlimited Digital services via eBay: I may eventually simply burn several of the boxes rather than take $45 a box at my local comic shop for stuff I spent around $1000 on per box (320 x 3).

(footnote: I’ll be sure to report it immediately if the floor on my upstairs office collapses under the weight)

Related revelation (my brain typically is on fire in the early morning): Some will say, “Don-el, if we all did like you and stopped buying new comics, all would end, no more comics.” To which I say: have you heard of Netflix? Have you heard of DCU? Right now, new content is flourishing within the one price per month / per year for all model! DC could offer a mix of brand new comic book series and their older library, just like we are doing here on DCU with original programming like Titans, for one base price per month!!! No more printed comics! Imagine…

If anyone wants to get rid of their comic books, there is an organization called Comic Books for Kids (comicbooksforkids.org) who will accept your old books and distribute them to kids in children hospitals across the country. It’s even tax deductible.

I have acquired masses amounts of comics over the years. Back when I was in collage Space Was a premium in my Studio apartment I would often leave a box of comics in the laundry room every so many month ( some of those are worth some money today)
Someone always took them.

My dad actually encouraged my collection as a kid- he was one of those that had a stack that would have been worth millions if his mom hadn’t made him throw them out when he got older. But at some point I realized mine was never going to pay for a house and it just felt crowded so I cleared some out.
My local used book store has started taking floppies for trade so I’m slowly re-reading and getting rid of anything that doesn’t “spark joy” as they say. I will probably always have and buy some (a lot of my trade credit has gone to the Kitchen Sink reprints of the Spirit, which I’d never read before), but I imagine I’ll never again have a room stuffed with long boxes.

@Don-El Regarding your second point, I completely agree. Most comics we buy generally will be one time only reads. It is nice to hang onto them for a while, so that if the mood should strike we can read them again.

But, when a closet begins to get full of “one time reads” it’s time to reassess what books to keep and which to let go.

For me, even 5,000 comics, or a bit more, takes up a lot of room. If I had lived in a higher income bracket when I was younger, I am sure my collection would be vastly bigger than it is now. My economic reality put a limit on the size of my collection though. Most of my comics are not worth all that much, but there are a few here and there that might get me a small some of money if I sold them, but even selling the entire collection would not make me rich. I would be lucky to get enough to buy a used beater car, more than likely.

I have considered donating some of my comics sooner or later, but have not done so yet. I have also thought about donating my entire collection to a charity after I die, if I ever get around to making a will.

I might be going through my collection soon. I started work on that recently, but then something came up and put that on hold. I might go ahead and start a donation stack of boxes while I am at it.

As for burning comics, what a waste. As long as they are still readable, they should be sold or given away, if you are done with them and no longer want to keep them.

I started collecting in December and I’ve already got about six short box’s and counting full.

How about if I only burn the Marvel Comics? I hate to waste a perfectly good burn pit in the back.

Don-El. I am also considering going all digital with this site, CU, and MU. With two kids getting ready to go off to college my days of spending 150/mo plus on comics are probably about over. Question. Does CU add most of the DC newer series up to 6 mo To 1 year from release? (I.e. similar to MU)

I guess we’re going to find that out it’s very new they only started publishing about a month-and-a-half ago on CU.

@Don-El, well, my first choice for comic reading is DC comics, but I do like some of those Marvel titles too. I remember finding a batch of marvel comic books while I was attending Job Corps, way, way back when, and some of the titles were ones I would not have bought of my own devices, but they were interesting nonetheless. Like Dazzler, who knew she could be a good way to kill some extra time. I still would not go out and buy a Dazzler comic, but if there is nothing else to read, and it is free, why not?

If you do not want to sell them, there are places that could use them.

I’ll keep that in mind mac jr… got to say though I do like me a Weenie Roast.

Eaglenovels, here’s just a sample of what I’m still trying to catch up on on Comixology Unlimited …I’m overwhelmed just with the three unlimited services. 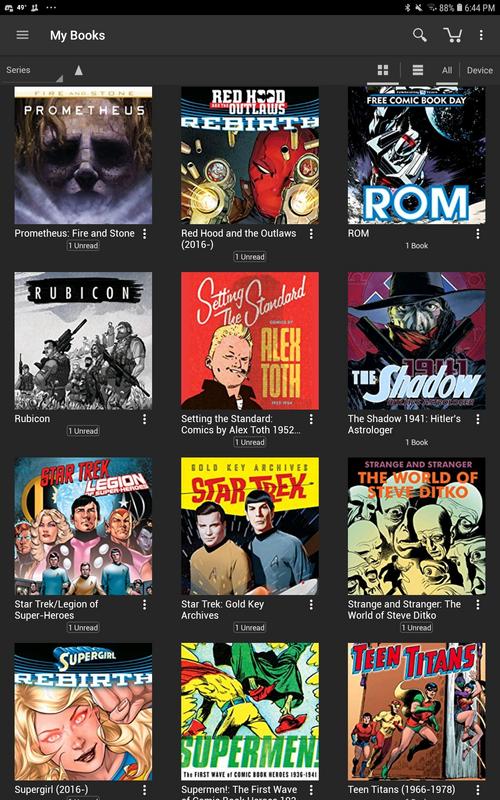 On filing cabinet #2 close to a #3…the plan for the future is to pass it down to my 2 girls to continue the tradition. It would be extremely hard for me to part with my collection:(

@Vroom: In answer your question I used to trim down my collection periodically so I had room for newer stuff and that happened as a result of losing several long boxes of comics from a combination of a basement flooding and a move when I was younger. I kept up doing that for several years and it worked out pretty well but ultimately I decided to get rid of my collection of single issues after making the move to digital only. I still have a few personal favorites that I kept or runs that haven’t been collected in trade as yet but these days my “collection” is confined to trades only. I was glad I did that to be honest because it would have been a chore to move that many long boxes from my old house to my new one last fall. I used to have around 50 long boxes and this way I only needed to move three.

@TheOrginalCaptainMarvel: That’s actually what I did when I decided to get rid of the bulk of my comic collection. I

My comics got thrown out long ago so I don’t have the dilemma of is my comic collection too big. I am buying lots of trade paperbacks which could get out of control.

We all have the collector mentality, but remember in the end you can’t take it with you. Also, your kids may not share your interests. I love my mom, but I’m not crazy about her pink Depression Glass collection. Try to sell it or pass it on before it gets out of hand.

Another charity that takes Comics is Operation Gratitude which has an annual Comics drive in November.