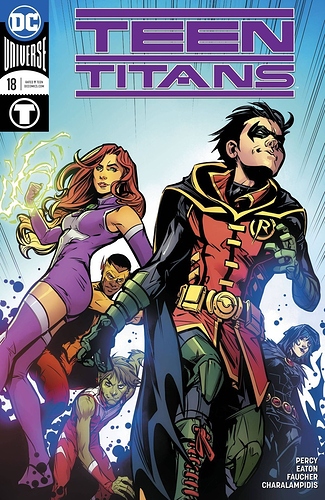 Starfire (2015) would have to be my favorite series because this is the first time that I’ve got to see how Koriand’r adjusts to life on Earth on her own. I also enjoyed the artwork and story on this series.

DCeased is one of mine. Along with Deathstroke by Christopher Priest, Teen Titans by Geoff Johns, Nightwing by Kyle Higgins and Batman And Robin by Peter J. Tomasi.

Mine switch constantly. I’ll go with my most recent. As of now it’s my favorite b/c I just chanced upon it, & it’s so great idk how that is. Madame Xanadu Vol 1, If DCU didn’t put it on here, idk if I’d have ever came across it. All time favorites, I have way too many. Teen Titans ( Perez & Wolfman) is way up there. Xanadu had me from the second I started it.

I liked that writer, Tom Taylor"s work on Earth 2, beginning with Issue 17, available in the library.

If you liked his work in another title Injustice, he is better here.

The situation is desperate.

Superman, Wonder Woman and Batman of this earth are dead, along with all Amazons, Lois Lane and Catwoman.

Helena Wayne and Power Girl have been transported to main Earth, in Worlds’ Finest Title, which is also great.

They were the only heroes of this world.

The World Army is helpless.

Darksaid has a new Superman, who might be resurrected from the old Superman, under his control.

The rich, who attempted to flee the planet in a spaceship, suffocated in space, when this Superman attacked the ship.

Thomas Wayne, with Hourman’s powers and a gun, is the new Batman.

Jimmy Olsen is Oracle, hacker of all the information in the world.

The Queen of Atlantis is Aquawoman.

There is a Krytonian who has never seen the sun, a Zod.

In a sense, this series uses versions of the oldest characters in the DCUniverse, and uses them well.

Though short, only four issues, I would have to say one of my favorites, just one of, is the 1996 “Batman: Gordon’s Law”. It shows Commissioner Gordon telling Batman to back off so her can delve deep into the corruption in his own department and the back alleys in Gotham to find the truth. It was great storytelling.

Absolutely loved Earth 2. I got a reading order together & it was superb. It only crossed a few times. I think Batman & Superman was one & Worlds finest Huntress & Power Girl. I could check my notebook. Either way, agree with u 100%, great read.

My favorite character is the Helena Wayne version of the Huntress, the daughter of Batman and Catwoman on.Earth 2.

Doomsday Clock has New 52 as a separate universe and states that the daughter of Batman will help him find his son.

So I am hoping she will return

I rrcommend the mini series of the Huntress where she assumed the name of the other Huntress and lead to the series Worlds Finest with Power Girl on.the main Earth.

This Power Girl was raised by Clark and Lois on Earth 2 from when she was young.
She called Lois Mommy.

In the last issues of Worlds Finest, Helena and Karen return to Earth 2 and are outraged at othets wearing the costumes of their fathers…

Lois talks to Kara and introduced herself. Kara cries out Mommy.

Even today, I cry when I think of that, having lost my mother more than twenty year ago.

Deeply saddened to hear that.

I love the ten titans series myself

Most of the time when I think of her I just smile.

I took care of het for the last five years of her life, going back home.

This is another question that could very well open the flood gates to my 50+ years of reading comics resulting in a torrent of sequential babble. But I’ll try to restrain myself. Yeah, right.
I’ve made it known on numerous other threads here on this app that Batman: Year One and Daredevil: Born Again are my all-time favorite stories, series, comics–whatever. It was Miller and Mazzucchelli at their best as they dug deep into souls of Batman and Daredevil. These are two timeless stories about birth, loss and ultimately personnel triumph.
Other favorites? Swamp Thing (vol1) by Len Wein and Bernie Wrightson
The Flash (vol 1) Cary Bates’s run ( with Irv Novick, Alex Saviuk and Carmine Infantino) from the murder of Irish to the completion of The Trial of the Flash.
Marv Wolfman and George Perez on their creation–The New Teen Titans.
John Byrne’s Man of Steel (My favorite Superman origin story)
Denny O’Neil and Neal Adams on the reinvention of THE Batman.
Dan Jurgens on any and all Superman and Booster Gold stories
Aquaman: The Search for Mera by Steve Skeates and Jim Aparo
There are tons more but in deference to brevity I’ll clam up now.

I have enjoyed Super Sons the most. But I also really like Superman (2016).

50+ years of reading comics!! That’s quite an achievement! You probably know so much about all the cool stuff. I’ve read all the Batman comics I could get my hands on as a child and teen but other than that, I’ve had this subscription for two months and looking forward to becoming an all-knowing superfan.

@CheekyGeekNinjaCat: I envy your journey into this wonderful medium. When I first started reading comics my eyes were wide open and my jaw was usually on the floor as I devoured my “four-color funny books”. The only thing else I can say is a single word quote from Stan Lee (the greatest comics creator of them all)–“ENJOY!”.

My current favorite DC series are…

Great question, @CheekyGeekNinjaCat! I love seeing everyone’s favorites! The series that has really stuck with me has been Batman and Robin. As opposed to Batman The New 52 (that I finished today), Bruce’s actions are what lead the story. It’s a side of him that we rarely see and each issue upped the ante on what he was willing to sacrifice for his son. I didn’t know much about Damian (or Talia) prior to beginning so that was a nice bonus. The contrast in each panel combined with the art style was incredible. I connected right away and it quickly became my favorite. My local comic shop couldn’t locate any paper copies but I look forward to one day owning the books.

Here are a few pages showcasing the illustrations and writing style. 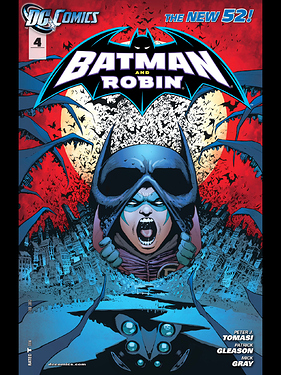 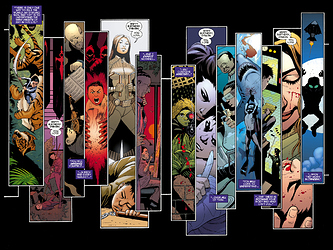 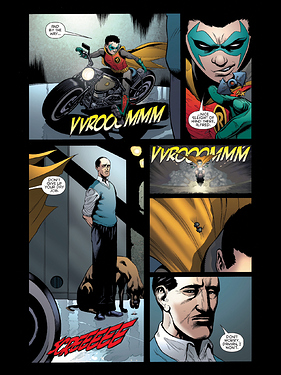 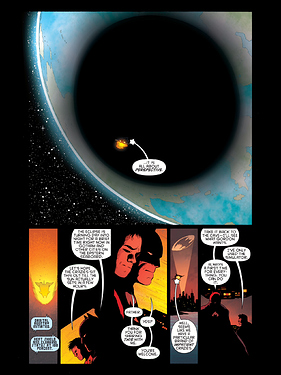 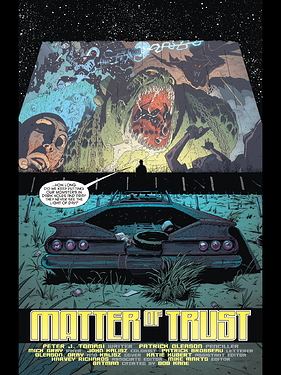 I’m with u on a lot of those. I answered too many to pick. So I just went with favorite one on this site that I’d never read b4 this site. Madame Xanadu which really is amazing. I threw Wolfman & Perez TNTT as a for sure all time favorite. Also love that Flash run u mentioned. I wasn’t sure about the trial at first, b4 I read any of it, just the premise. I ended up loving it. Also loved Johns’ Flash run. Love most Infantino products if not all.