What is your favorite lantern? You can name a common lantern that everyone knows like the main ones (Hal Jordan, Kyle Rayner, etc.) or it can be a more obscure lantern since there are thousands of these. you can tell us why you made the choice you made, and you can even give us a story about them or an interesting fact about them that caught your eye when reading through the comics. There are no right or wrong answers here; just has to be a lantern, any of your choice. And yes you can also mention the Golden Age Lantern or the various multiverse incarnations of the original lantern. 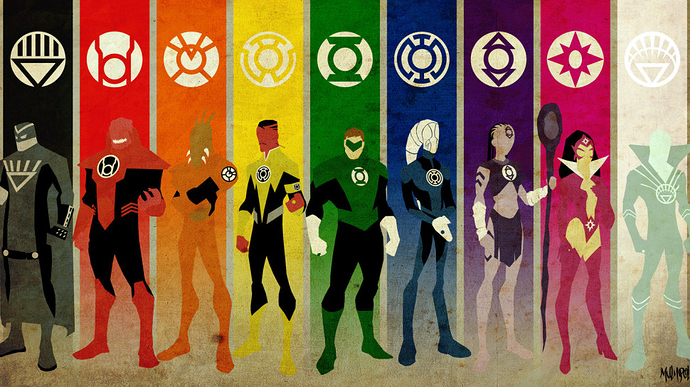 Since I have already explained in other posts why Hal is one of my top lanterns and have also explained that Indigo-1 and Saint Walker are among my top tier, here are some others that are also part of that list, and please feel free to share or contribute yours to this post as well.

Some of my favorite lanterns:

@MisfitCMJ all are equally good choices. Thanks for contributing. I like that you mentioned Jade - as the daughter of the Golden Age Lantern Alan Scott- she has access to that the same power of the Starheart, unfortunately, that means she has the same wood flaw, but, she is still an interesting character nonetheless. Most people tend to just mention Alan Scott, because he is the most well-known when it comes to those Golden Age characters, but I like that you mentioned both of them. I also like that she brought more of a resolve to Alan Scott’s character and helped Kyle Rayner’s to develop and grow more as we know him now.

If the Lego Batman 3 game counts, then I know a little more about the Lanterns, but I like the philosophy of the Blue Lanterns, but the Green Lantern Corps is the most intriguing to me.

As for the Green Lanterns, I like Hal, then B’dg, then Kilowog.

@Pollster you don’t have to be that familiar with the corps to post, and thanks for your contribution.

I agree, The Blue Lanterns are certainly an interesting group of lanterns, not only because of their philosophy of hope and ideals, but also because there is few of them, which shows that not everyone can be a blue lantern - its a difficult task because to be a part of the Blue Lantern Corps means that you have to give of yourself fully to cause for not just yourself but for the entire universe selflessly and not too many beings are capable of that. That and their powers are pretty cool in that they can bolster the power and ring charge of the greens when they are in their vicinity, they have certain healing properties too that can quell the red emotion of rage, or orange (greed), and repel or drain a yellow ring of fear.

Hal has always been a fan favorite of mine, and the number one on my lantern list above the ones I have mentioned. Kilowog is an awesome character in that he is trainer for the corps and helps keep the other green lanterns in line, and I liked B’dg’s adaptation in The End/Rise of the Third Army as sort of a mentor figure for Lantern Simon Baz.

If I could have a Lantern Ring for two Lantern spectrums, I aspire to “wield” a Green and Blue Lantern Ring. If I knew more about the Indigo Tribe or White Lantern Corps, that could change, but having the ability to turn will into power is always something that I can adhere to.

@Pollster that seems like a cool combination of lantern ring power. In fact in the book Agent Orange, and towards the end of Rage of the Red Lanterns, there was a moment that Hal Jordan wielded both a green and a blue ring. His blue ring constantly bolstered his green rings power, but he could never get the blue ring to work properly until the very end of the Agent Orange book - when he hoped the blue ring would leave him. The Blue Lanterns were attempting to induct him into their corps, unfortunately, it never panned out the way they wanted it too, because Hal’s heart and mind will always be with the Greens. Its a good read, please check it out if you want to, or if you like reading any comic books, and then there is always Brightest Day and or Blackest Night, and of course the Revenge of Black Hand books - that give more details about the origins of the White Lanterns and Indigo Tribe if you are interested in learning more about those corps.

I tried reading both Blackest Night and Brightest Day, but part of my personal code is that I don’t like to read profanity unless it’s something like “What the he–”, “WTH”, “What the #$&*”, “What the heck”, or possibly if there is something like that. For instance in Trinity, the villain calls someone a pissant and I think Flash calls him out on it, saying “Watch your language” or something. I never heard that word before, and I still don’t know if that is profane, for it seems similar to someone calling someone else a worm. But, before I get too off topic, I will look at the Agent Orange book and Revenge of Black Hand, but it is because of my “code” that I usually only read Golden-some Bronze Age comics.

@Pollster that is fine, some don’t like to read comics that much, or they don’t like the more modern new 52, Rebirth, or modern issues. I tend to like all modern age and classic age equally, but that is me. I also like the Golden Age/Bronze Age issues- the Golden Age Green Lantern Alan Scott is one of the few favorites of mine. Your opinions are most welcome.

I know the question wasn’t Corps-specific, but my list is going to be very Green anyway:

Oh, and my conspicuous failure to mention Simon Baz is not meant as a snub, I just have no particular opinion on him.

Hal Jordan is my favorite GL, but I also like John Stewart, Kilowog and Guy Gardner. I have to mention Jessica Cruz because I loved her in the JUSTICE LEAGUE VS THE FATAL FIVE movie!
I honestly love the whole GL Corps. I’m ready for the live-action series, a new movie and still have hopes to see a second season for the canceled cartoons network Green Lantern Animated Series.

@grailknightpercival94 you are most welcome and thanks for your contribution. John Stewart is also a green lantern that I like, he was also one of the one’s most vocal for the corps and had the most military training prior to the corps having served as a US marine. So one could say he had the most experience with drills and the like. I also like his appearance in the Justice League Animated Series, I thought the actor that played him did an excellent job.

Thanks for your contribution @Batjamags, Hal and Carol are also favorites of mine for the same reasons, and I am glad that Guy Gardner is getting some attention too, most people are a bit off put by the way he was written and chooses to come out, but that is just part of his character. I personally have no qualms with it. And I liked the whole arc where he became a red lantern and sort of helped try to reform that group, even though that did not pan out.

@Moe.Vargas I think that’s cool that you are a big GL fan. Thanks for your contribution and I also cannot wait for the 2nd season of the animated series- so that we can get a resolve to Aya and Razer’s story, a little bit more of Krona, and the War of Light. Maybe a reveal of the Blackest Night arc. The Live action-series and movie I am also ready for. I wonder who they might cast for those.
Jessica Cruz has been a lantern that has grown on me for a while, as a lantern that has overcome debilitating illness, fought hard to overcome the influence of the ring of Volthoom, and then join the corps as an equal member. I think she is among those most inspirational in the corps for those reasons.

Kyle, Black Hand, Atrocitus, Cruz, the one that held Robin Williams, the one from Our Gang (I’m ancient).

Thanks for your contribution @TheBatmanofNML - Atrocitus and Black Hand have been not only some of my favorite lantern villains, but they are also in my list of favorite overall villains- Black Hand definitely has some creepy, disturbing moments, especially the John’s run, where he is constantly obsessed with death, and speaking to the dead, etc. Atrocitus, is a great adversary too, although I would say that he is not all bad considering what happened to his sector, and there were moments where it felt like he was trying to reform, but in the end he does make a better villain. And nice Robin Williams reference

Kyle is also a great green lantern- I get why some don’t like his origin, or the way he started initially, but he is one of those that grow on you, I personally like how his constructs were imaginative, and creative which mimicked his skills in artistry. Hal and Stewart were also a bit imaginative in their constructs, but they were never as creative as Kyle. I felt that his white lantern arc fit him the most, its a shame that had to end though.

I actually liked the start of Kyle. I missed the infamous fridge but came in somewhere around #20. I haven’t read his series all the way through but I really liked the issues where he fought “Oblivion.” I had trouble connecting to all the other human lanterns (they always seemed distant) but I liked Kyle as a person. I’ve read stuff since the that run that has put a damper on my initial enthusiasm but I’ll still defend him to anyone! His humor really gets me. (There was this one issue with Plas and Booster Gold… aahh)

@TheBatmanofNML I admire your enthusiasm and appreciation of Kyle Rayner. As I said before he never seems to get the respect he deserves more so akin Guy Gardner, but for a different reason. Kyle has had many relationships with other lanterns, like Jade, Soranik Natu (Sinestro’s daughter) and, I believe there was a time he was also dating Carol for the time he was a white lanterns. But I’d like to believe each of those relationships brought something to him and made him grow and develop in some way, even though some of them came to a bad end.

Hal and Carol are my favorites for a lot of the reasons mentioned above. I really wish we’d see more of Carol both at Ferris and as a Lantern.

For lesser known characters, I like DeX-Starr and Larfleeze alot too.