This may be a dumb question, but I legitimately cannot figure this out. I’m catching up on the Young Justice comic, and I noticed that Jayna (Wonder Twins) has a like green robot arm thing. It seems random too. Sometimes she has it, sometimes she doesn’t. It’s never mentioned or explained in the comic. It never showed up in the Wonder Twins book either. Does anyone know what the heck it is?

EDIT: I should mention, this image is from Young Justice 14. She only seems to have the arm in 13 and 14, and only in some panels. 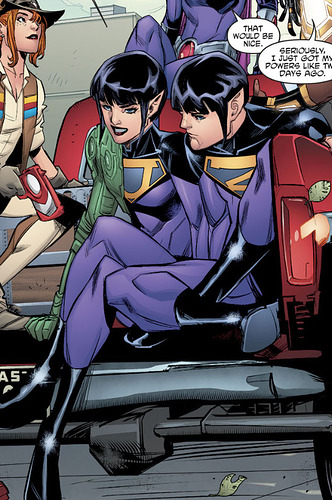 Quite the mystery… I’ve determined that it first appears in issue 12, when Jayna and Zan depart Wonder Woman’s Invisible Jet, but I’m unsure of what it’s supposed to be – and it does seem to disappear and return between panels without acknowledgment. Perhaps it’s a remnant of an earlier version of the script? I’ll do some investigating and check back when I have more information.