What's The Scoop With RWBY?

I know its an anime (or anime-esque), evidently WB has some involvement with it and that DC debuted a Digital First series for it today (Wednesday).

Is the anime available on a streaming service (I’m thinking CrunchyRoll) and has anyone read the DC book yet? It looks intetesting. 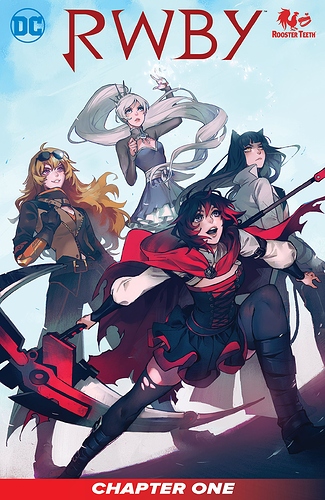 It’s an independent production by Rooster Teeth, so the technical quality on the first couple volumes is pretty rough, but it’s still really good. Not sure what the WB connection is, but probably just licensing for things like the DC book.

@BatJamags Thanks! I also see that Tubi has some RWBY material.

RWBY is great, and so is the first issue of that comic.

Is the comic a good starting point or should I watch the source material first if I want to try this?

@Awesome_Squid: Huh, I didn’t know that. Seems appropriate, given that it’s R-WB-Y and all.

We (my teens and I) love RWBY. The first few seasons are available on Prime Video too. The episodes are super short you can easily watch the first season in a couple of hours or so. They eventually get longer as the seasons progress. I haven’t read the comic yet, was kind of wondering if they’d add it here but I’m happy to dish out 99 cents to read it online.

I watched close to an hour of what I guess is season one last night. It seemed to be more like a movie, as there were no episode breaks and it ran for over 90 minutes (maybe it’s edited together like the CW Seed Vixen series eventually was). By and large, I dug it.

@faerietxn Thanks for the deets about Prime Video. I’ll look into that.

Seasons 1-5 are all on YouTube to watch for free