We’re sticking with the new format of splitting up the lists into 2 drop-down menus to showcase upcoming ULTRA comics as well as regular DC UNIVERSE INFINITE issues.

Let’s not waste any time and get right into the lists! Get your pull lists together:

Artemis: Requiem!!! This was a fun series and can’t wait to read it again on DCUI.

I do have a question regarding collected editions/omnibus on Ultra. Is there a release schedule like 1 month or 3 months after a book has been released or are they more random?

I believe they follow the same ‘30 days after release’ schedule that other comics follow, but I will double check and confirm for you!

Fantastic! I love to see more of the DCU books in the Archives! Thanks so much!

I have been waiting for this one to come around.

I believe @Vroom was also looking forward to it.

I hope this means a physical collection is not too far in the future!

Very happy to see that the archival release schedule has finally returned to a “DC Universe”-heavy slate, after what feels like too many years. And all of the titles that are being digitized are ones that were requested here, too.

Oh yeah, this is shaping up to be a GOOD year for archive enthusiasts.

Guys you have a great cite but for the icing on the cake can you please add some of Ed Benes missing work like “Artemis Requiem”?

My request finally happened after years! More digitized Ed Benes artwork for me.

I requested Artemis: Requiem so much. I am so happy it’s finally coming!

I’m still new so haven’t been reading much DC except for new stuff, but will start Artemis since they’re adding it.

I think you will like this a lot! Then again, I am sort of biased as Artemis is my favorite Amazon that isn’t named Diana.

Thanks! I tend to read collected editions, I know its silly as the single issues are on here but I like to add to my GoodReads list with the real things.

If you have access to the lounge, a group of us shared our GR profiles over there so we can add each other as friends. If you see Reading Lounge, that is where it is. Just wanted to mention since you use GR as well.

A really nice list of comics this time around! I’m especially excited for Artemis: Requiem! It’s one of the last major Wonder Woman stories not yet up on the service, so it’s a treat to see.
By the way, I was curious and I want back and checked, but including issues on Ultra, we’ll only be missing 10 issues of post crisis Wonder Woman: 2 Annuals, 3 Secret Files, and 5 assorted one-shots (including a rather silly looking Kellogg’s promotion.) If anyone was waiting for a Wonder Woman binge, now is the perfect time! You can read just about everything. I know what I’m doing in 2023… 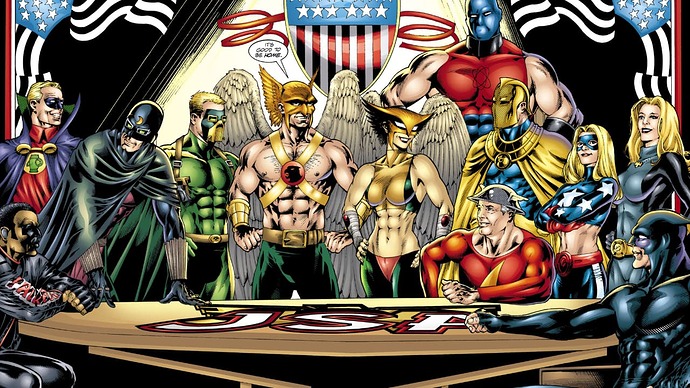 Just taking a walk and had a brief moment of panic that Stargirl 3 wasn’t listed and we’d have to wait 2 months for the next issue. Thankfully I just misread and we’ll be getting it in just two weeks.

Also, yay - thanks DCU for giving us more DC backlog and less Wildstorm this month! Really happy about that!

Nice looking list of books! Excited about the Justice Society! However, STILL no Silver Age Atom??? Ray Palmer gets no love!

At least Al Pratt does get love.

Yesterday I try to make Ray Palmer out of Minecraft, making him really small, didn’t work, guess I’ll have to make him in regular size.
As for comic he is a great character.