Whatever Happened to Superboy-Prime (SuperMAN-Prime)?

Can anyone tell me whatever became of Superboy-Prime after he was “banished” back to Earth-Prime (he’s here, on OUR EARTH?!?) after the conclusion of “Legion Of Three Worlds”? 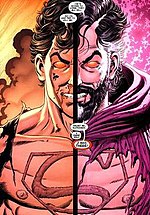 He participated in Blackest Night. The last story listed on DC Database is Legion of Doom.

The following is from DC Database:

During a battle with the Teen Titans, a young villain named Headcase opened up a wormhole that accidentally transported Superboy-Prime back to their dimension. Enraged by his separation from Laurie, Superboy-Prime vowed to destroy the Titans and find a way to return home. He subsequently assembled a cadre of young super-villains consisting of Headcase, Zookeeper, Indigo, Sungirl, Persuader and a new Inertia, each of whom had a personal grudge against the Titans.

He also brought three clones of Superboy which were formed from the remains of Match to assist in the attack on the Titans. Superboy-Prime and his team attempted to destroy Titans Tower, but were met by a large group of former Titans. After his defeat by the combined might of the surviving Titans, Superboy and Supergirl imprison him within the Source Wall. 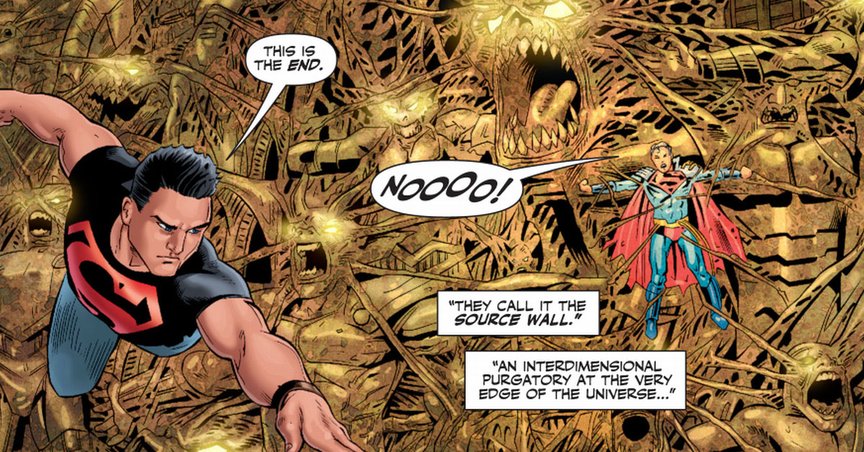 He got a job at Toys R Us in Canada.

I still feel that what was done to Superboy Prime, turning him into a villain, was a bad decision. He had seemed like a nice kid when he first appeared.

Anyway, some nice kids go bad in real life too though. It is still a sad thing to see, even in fiction, when it happens though.

I wouldn’t have minded him as a bad guy- it was him turning into a snotty little creep of a bad guy that annoyed me. There is a lot of potential in the idea of a character from a “better” world turning dark when made to live in the “real” one and it was a shame to see it wasted.

“The return of Superboy! Superboy-Prime, that is! The grasp of BLACKEST NIGHT knows no bounds, and it is now at the doorstep of Superboy-Prime. Believe it or not, Prime has met his match. The Black Lanterns know his deepest, darkest secrets and force Prime to feel emotions he’s long discarded. Plus, in the Legion of Super-Heroes co-feature, Dawnstar is on the trail of the person—or people—who have been causing so much trouble for the Legion. But does she get too close to the truth? Her Legion teammate Wildfire comes to her rescue, but are the duo able to discover just who is behind this villainous plot to destroy the known universe?”

He’s back! Don’t miss the issue where one of the deadliest and most psychotic threats in the DC Universe returns. It’s Superboy Prime! Of all things to hate, he hates The Teen Titans most of all. Now he’s coming for them, and he’s not coming alone.

Superboy-Prime is my favorite character. I do not like how the writers kind of just gave him a horrible reputation as a snotty kid. But his whole concept is amazing to a detail. I love how he originates from earth prime and is kind of a symbol of a Spoiled Real life kid who uses his powers for granted. Selfish and Greedy.

He was last right right before Flashpoint, but with coming time/multiverse shuffling with the finale of Doomsday Clock, I would’t be surprised if it’ll soon be PRIME TIME again