What Would the Population of Earth Be in the DC Universe?

I asked this on Facebook, but thought it would be fun to speculate on here also.

In the DC Universe they have a ton of made up cities like Gotham, Coast City, etc. Made up small towns, made up countries and islands as well as places like atlantas etc.

Yet they also clearly have all the same cities, towns, countries, islands etc. we do. I mean Kahndaw and Bailya may be substitutes for places in the Middle East but clearly Egypt and Iraq, etc. still exist. And while people say Gotham is a subtitute for New York City, but New York City exist also.

So my question is, with all these fictional cities, countries, islands, towns and secret civilizations existing in a world where all the cities, towns, islands and countries that exist here also exist beside them. Would Earth in the DC Universe not have to theoretically have 2 or 3 times the world population we have here to occupy all those fictional places alongside the real ones?

The fictional countries in the DC Universe are all relatively small. Even considering the several New York City-sized additional cities in the US, I doubt the total additional population would add up to more than 100 million.

If our world is closer to Marvel’s universe… 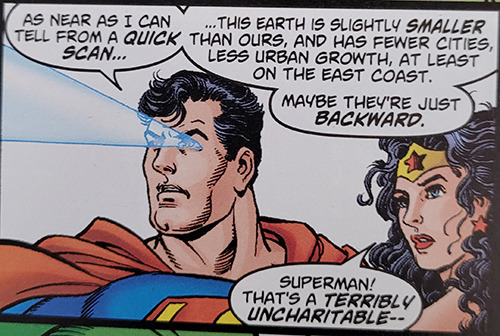