What Was Your Very First DC Toy or Collectible?

Let’s hop in a Brainiac-5 certified Time Sphere and go back to the Long, Long Ago (or not so long)!

My first DC toy was the Toy Biz Batman action figure from their Batman movie based toyline. Clear as day, I still remember seeing him at Target and pulling him off the peg. I didn’t know who Batman was, what DC Comics was, or know of the Batman movie. I just saw the figure and thought he looked cool. I bought him along with an Egon Spengler figure from Kenner’s The Real Ghostbusters line. They were nice Friday afterschool treats =)

In 1990, I was really into the Adam West Batman show when it aired on the Family Channel, so I repainted the figure blue and gray to match West’s look (I made a custom cape too). Months later my interest in that look on the figure waned. Through judicious use of paint thinner, I had Batman back to his movie accurate black suit.

I still have this figure. His cape took a hike many moons ago, but the figure is still in decent shape and he still has his Batarang and grapple gun accessories. The retractable utility belt feature still works too.

Later this year, Mattel will be producing a Batman figure in their DC Multiverse line that is in tribute to the Toy Biz version (along with tributes to the TB Joker and Riddler figures). It looks good so far.

So, that’s my first DC toy. What was your first toy/collectible from the wonderful world of DC?

So on my 7th birthday my older sister goes to Toys R Us and grabs pretty much all the Super Powers figures they had off the shelf. Superman, Batman, Wonder Woman, Hawkman, Firestorm, the Supermobile…it was just a phenomenal gift for a 7 year old. The years passed by and my toys got handed down to younger cousins. 28 years later, I decided to start collecting…and I went straight to ebay and bought the Super Powers Trinity

. I bought more from that line, that I decided to sell later on to fund other stuff. You can see the entirety of my collection on the DC Collectors Look Here thread.

@Haru Killer Frost figure was your first?? You lucky dog… Jeez talk about setting the bar high
lol my first DC toy was like a Mcdonalds happy meal batman toy with literally no points of articulation lol

lol ikr
McDonalds needs to up their game

The company was called corgi they made small metal cars for little kids to play with I don’t think the company exists anymore But I was given a Bat Mobile from the 1960 TV show when I was 5 or so It was cool it came with Batman an Robin and injectable seat.

@moro Your sister is awesome. She had exquisite taste in toys =)

When growing up my mom got me the Mego Figures Superman Batman Wonder Woman and Aquaman to play with when watching the Super Friends.

I had this flash figure that I thought was really cool back in the day. I still have it, but it’s missing its head.

It had to be either the Super Powers Batman or Superman. I also remember the best place to buy Super Powers figures in my area was People’s Drug store. I don’t know if People’s was just a awesome store and I was to little to realize it or what but they had a awesome toy section. Just to give you an idea of what they had:

That is just what I remember off the top of my head. And it wasn’t just one or two pegs it was a large section. They also had one of the better comic sections in my area.

Mego Batman (and Robin at the same time). I was obsessed with Batman '66.

My folks had no idea about the dragon that they had just encouraged a five-year old to chase.

The first DC collectible I remember owing was a Superman shirt from Superman: The movie which you could ‘dress up’ as Clark Kent with velcro clothes! I also remember for my 5th birthday dressing up as Superman with a costume my mom put together. For toys, it must have been a Mego Superman and/or Batman, but I do not remember that… the ones I remember was the Super Powers Flash and Superman (I bought those together).

When I was six I had a Batman birthday party. I don’t have any of the toys but I do have a set of Batman and Robin vinyl placemats. They are trashed but original
I am looking for a set in good condition but not to replace the others

A rubber Batman or a Mego Aquaman.

@Misfit What kind of rubber Batman? Was he a Stretch Armstrong kind of deal or something else?

Do you still have the Mego Aquaman? If you’re interested, there are currently new Mego DC figures at Target. Aquaman and Black Manta will be in the first Mego assortment that is not exclusive to Target. I think they’re due for release fairly soon too.

I still have it. I won a plush Robin back in 1998 at Discovery Zone. 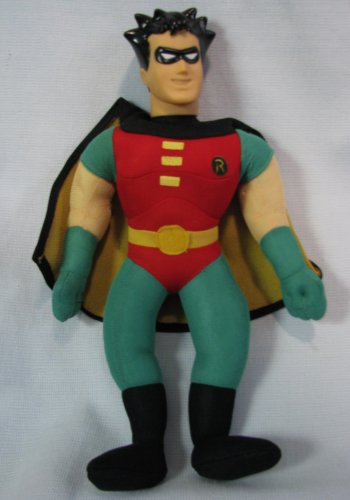 @Vroom he was kind of a classic Bendy toy, and far from new. I think he may have had a missing cloth cape, and part of one leg gone. There was also a Green Hornet. Aquaman was one of the original Mego figures-- not as study as the later ones, whic aren’t study either. He fell apart and got thrown away by others that were not me. BUt I was 8ish and nobody asked me. And they should have. I have always meant to get one of the later presses of that original Aquaman figure from Figures Toy company and just haven’t gotten around to it. But I did get a bagged Batman at the end of last year and used him as a Christmas tree topper. Don’t worry. He wasn’t harmed.