What Supervillain do you think has the coolest Powers?

Like the title says what supervillain has the coolest powers? I personally think the Reverse Flash has the coolest powers his powers are a mix of super speed and time travel. Let me know what you think. Let’s give the bad guys some love because they definitely didn’t get it as children. Insert evil laugh here lol

Live action Doom Patrol’s Mr. Nobody. I could materialize merch!

Even though its not technically a superpower, I love the Scarecrows fear toxin. To see the effects it had in Batman Begins, and the Arkham games was really cool. I love the notion of being completely overwhelmed your own fears, and having to escape it. It makes for some creepy scenes, and I think its awesome.

I gotta go with any character who can shape-shift at a cellular level. Than u can be & have everyone’s powers.

I got to switch my keyboard back from Russian. I like Darkseid’s powers. Laser beams that chase people. Superman level strength, and good looks too.

@Behemoth I know I’m notorious for taking off topic, but I gotta say - you’re a ninja and you speak Russian? Thats pretty cool. I’ll be sure to stay on your good side.

I know enough to have convinced my friends I have a Russian Instagram. I’ve never used Instagram a day in my life.

I think Clayface’s Power is super useful but very under utilized. I mean being able to look like anyone and mimic their skills as well as turning his body into any shape. It has so many possibilities. Although, the whole being made of clay part is a downside

@CrazyQuilt I didn’t realize that was a character and thought you were just enthusiastically announcing your entrance. So, hello!!

@CynicalPink I was doing both. Crazy Quilt is a real villain, albeit an absolutely horrible one. I’ve literally only seen him steal eyeballs, pun intended.

@CrazyQuilt that sounds amazing in a train wreck sort of way!

@CynicalPink It is indeed. I changed my username from grosch, i realized i’m obsessed with Crazy Quilt

He’s not DC, but I gotta go with Molecule Man. If he didn’t have severe mental and emotional problems, he would be unstoppable. 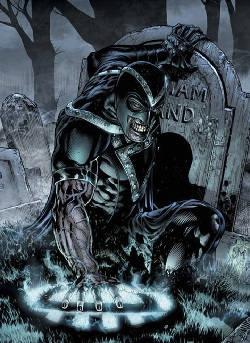 I think Black Hand has the coolest powers- and when I mean Black Hand- not the energy rod version that had absorbed the lanterns light energy.

But the other modern version, because of actions of aliens jump starting his abilities (Even before, with his goofy energy rod version, he was always deemed a conduit for the Black), he was granted the ability of life force absorption- he can consume the life force of the living- however the downside to his life-force drain ability is that he will decay if he doesn’t do it often to be able to regenerate his limb. However the loss of his limb has left him in often crazed and unstable mental state.

He is the leader of the Black Lantern Corps (Death) and therefore as a member and leader of the Black Lanterns, he can use his ring to negate the light- causing a blackout effect which weakens other Lantern rings, he can reanimate the dead; but they return as mindless zombies that do his bidding. He’s able to control them even without directly influencing or controlling their behaviors. He can use his ring to heal from any wound, or anything that would kill most people instantly. Since the ring has the power of death itself, and he is already practically dead at this point. He can also sever a Lantern connection to the emotional spectrum entirely. I would also say that he can somewhat commune with the dead as well and learn their secrets to some degree.

I agree Black Hand came back from the dead and then commanded an undead army of fallen heroes and villains.
Darkest Night is epic and I just reread it recently because the artwork and story are phenomenal.

The fact that Black Hand stabbed his friend in the neck just to see what it felt like to kill someone. In the Book of Hand, William said, he looked at me and perhaps gurgled why, but death doesn’t have to have a reason.

He was creepy as a child and even more heinous as an adult.

I think that Enchantress is one of the most powerful villains. She’s even strong enough to bring down Superman (on a couple of occasions).

In terms of what power set I’d want, I’ll go with Despero because telepathy is cool.

In terms of what powers are cool to see in a story, Brainiac’s capabilities are always impressive, variable though they may be.