Okay, so I’m pretty sure most people are gonna go with Arkham Scarecrow, if not everyone. But while I absolutely love that Scarecrow, (especially the version from Arkham Asylum) I would never consider that my definitive Scarecrow. Instead, I’m gonna have to go with Jeffery Combs in The New Batman Adventures. The design is awesome, his motivations are much less stereotypically evil like in TAS, plus, Scarecrow is Jeffery Combs’ best DC voice role In my opinion, though the Question and Brainiac aren’t far behind. 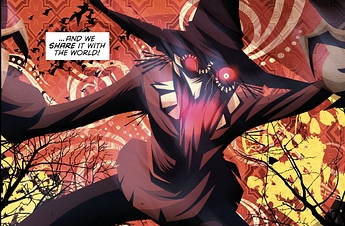 Scarecrow’s design in that show was amazing. Potentially the best he’s ever looked. It was his origin that kinda fell flat for me. It’s based off his New 52 origin, which is a perfect fit for Gotham, but I was never a big fan of it to begin with. I definitely understand why people like it though.

For me it’s Asylum. I like seeing the scrawny guy running around laughing evilly and stabbing people with needles.

I like Arkham knights. Asylum was fun but I just like the serious and voice of the knights.

I might be the only one who says this, but I prefer the Scarecrow from BTAS. The revamped version from TNBA is great, but there’s something very creepy about the Scarecrow we see in episodes like “Dreams in Darkness” and “Trial”, and I prefer that look over the Grim Reaper aesthetic in TNBA.

I can see that. I much prefer the TNBA version but the BTAS version is still very underrated. Henry Pollock II was unavailable during the production of Trial so they couldn’t get him to be in the episode, but honestly his silence makes him all the more creepy.