What’s new in Comics especially DC comics that’s got you excited dare I say hyped up?! Speaking for myself DCeased 2 and Death Metal have me feeling like a kid on Christmas morning. I’m also looking forward to the virtual cons and all the information coming out for that year! So let’s talk about it let’s make this go trending because we are all fans and what makes a DC fan happy new DC content!

Respect the S. @Kon-El @Vroom PS @HubCityQuestion I really want to know what the IRL cyber Question is getting excited for in the DC Universe.

They’re technically not new, but they are new to DC Universe. I’ve been dying to read through the latest Dial H for Hero and Wonder Twins series for a while, but never got around to it. But now they’re on here and I’ve been LOVING them so far. Can’t wait for some more issues to drop.

Some current and upcoming comics I’m jazzed for:

I’m very excited for DC Fandome and what announcements come from it. I imagine some big news will pop forth.

I would like to get hyped for the Generation Zero book, but its fate seems to be up in the air at the moment.

Anyway, lots of cool stuff to be excited for! As always, thanks for the shoutout @jsmsiggy!

I love the Wal-Mart 100 page Giants. Its a mix of a) they’re a great deal and b) I’m still not used to being able to buy comics on trips to Wal-Mart, so I fall for it every time. When Tom Kings Up in the Sky was being introduced solely through those issues, I was ecstatic to find out that my local Wal-Mart was carrying them.

As far as what else has me excited right now-

Brian Bendis finishing his run on Superman, and his continuing run on Legion of Superheroes.

Dark Knights: Death Metal- at this point, I’ll read anything Scott Snyder and Greg Capullo put out. Its just always better when its characters you love, like the entire DCU

Three Jokers by Geoff Johns and Jason Fabok is out soon. Been waiting years to read that story.

Batman/Catwoman by Tom King and Clay Mann is also on the horizon. Phantasm in the main DCU! About time

First and foremost: THE QUESTION: THE DEATHS OF VIC SAGE. This series has been an incredible tribute to Steve Ditko and Dennis O’Neil’s work on the character, and issue 3 was tremendous. Can’t wait to see how it all ends.

Robert Venditti’s HAWKMAN. Every issue brings new depths to the character, and I love seeing it all unfold.

And finally: this cover for the upcoming JOKER WAR ZONE: 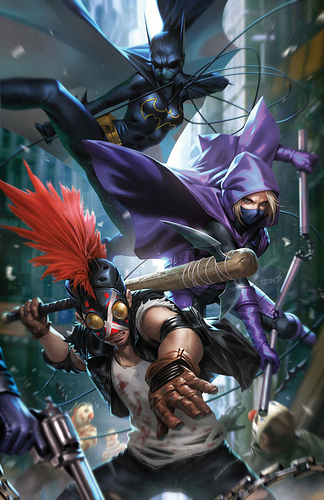 Oh, one more: DC is collecting the original run of RICHARD DRAGON: KUNG FU FIGHTER for the first time!!! 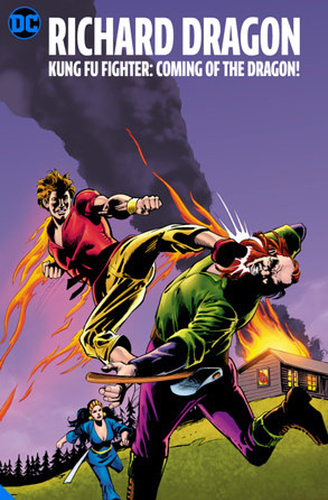 The Giant line is DC’s best print value. New content mixed with in some snazzy reprints (and brand new cover art for the direct market editions) all for just a buck more than a regular book. What’s not to love?

Joker War isn’t on my radar right now, but seeing that image of the Cass Batgirl has me excited for her returning (or debuting, given current continuity) to the role. Unless someone else is under the mask and it’s a psyche-out. Cass wasn’t the first to wear that suit, afterall.

Pre Crisis A team up between the Justice league, the Justice Society and the New Gods agaisnt the forces of Darkseid

Rebirth
The Hellblazer team up of Constantine and the Huntress

I’m on a six month-one year delay. Even before this app I had already stopped buying monthly comics. Too expensive. Too much space in my house. So my answers reflect that.

I continue to enjoy and am excited about…

I am hopeful that YJ can be turned around. I love Tim, Conner, and Bart. That is a brutally disappointing title for me.

@TurokSonOfStone1950 I hate that too. I love Azrael. Since his successful solo he’s never really found a home.

The upcoming second volume of Green Lantern: Earth One. I love the Earth One line and found the first Green Lantern volume intriguing. Dying to see where it goes.

With Jimmy Olsen and Lois Lane ending as well as The Terrifics and the other 12 issue series (Dial H & Martian Manhunter), there isn’t much coming on the horizon that does excite me.

Strange Adventures. That is about it for me. I’m still collecting Detective Comics, LSH, The Green Lantern, and Aquaman, but there isn’t anything new going on with any of those

I look forward to the next time new and interesting projects are announced.

So many things! Strange Adventures and Superman returning this week, the cliffhanger at the end of this week’s Young Justice, the upcoming Joker War and Three Jokers, Fandome, and today’s Snyder Cut teaser!

@moro The Grant Morrison Superman Omnibus comes out February of next year.

didn’t know much about DC fandome except that it was going to happen, just looked more into it and I have to say I am hyped!

Yep! My hope is that they’re keeping Henry’s return a surprise for the actual event!

Hey buddy I searched 3 jokers and searched it along with your tag/name & couldn’t find it. I don’t want any spoilers but I said I’d stop by it & say hi. So I’ll do that here by adding to @jsmsiggy thread by saying I’m looking forward to 3 Jokers & Death Metal. I told u in polls polls polls I’d stop by yours and say hello & I’m a man of my word I just can’t find it lol. Great thread @jsmsiggy!!!