What issues of Infinity Inc(1984) are worth reading?

I made a reading list for myself that turned out to be very long, so I thought I’d come here for suggestions for trimming down some of the longer series. So to start, does anyone have any idea what parts of Infinity inc (1984) are the best? I’m mostly interested in Jade, Obsidian, and Fury, but that’s not a hard rule.

I loved the series at the time, and you get early Todd Macfarlane really experimenting with layouts. Finally, it will read very much as a stand-alone story today. It’s on my “series to revisit” list but so many great comics here don’t know when I’ll get to it.

Infinity inc and all star squadron are some good reads, but ol rascally Roy is one wordy cat. I suggest readin them in 3,4 issue chunks. Just start at issue one…

Not being that guy, but all. That’s just my opinion but I never regretted reading a single issue. Just make sure (imho) you read it in the generations saga order. All star Squadron #25-#26, (83) All Star Squadron Annual #2 (83), then start with infinity inc issue 1 (84). 1-4 ends the generation saga but u can read the entire series from starting with that order & get some cool nods, & for just reading 3 issues of all star it sets up the entire infinity inc series beautifully.

I can’t think really of any bad issues
The comic is honestly one of my favorites it introduced some great characters and almost all got incorporated into JSA. Like Hank Hall/ Silver Scarab, Lyta, Obsidian, Atom Smasher, Power Girl (kind of), and Rick Tyler Hourman II.
All the situations they are in are kind of similar however as they almost all feature the JSA getting attacked in some way and Infinity Inc. saving them.

One of my favorite scenes is very early into issue one where the offspring of some JSA members are attacking them and doing a pretty good job and someone asks Dr. Fate if he should stop them and he pretty much just says "hold on I want to see where this goes. Thats one of the big things that draws me into Infinity is that it can be really witty at times.

It also features just about my favorite single panel and comics with Power Girl throwing a castle at Solomon Grundy.

I’m a big Infinity, Inc. fan, so I’m happy to share my thoughts. Here are some of the better storylines, at least from how I remember them.

#25-29: First post-Crisis story and the second appearance of Helix (issue #27 is a spotlight on Fury, in particular)

#30: JSA Memorial issue (acts as a follow-up to the “Last Days of the JSA” special).

The team-ups with the Outsiders and the New Teen Titans are also fun. 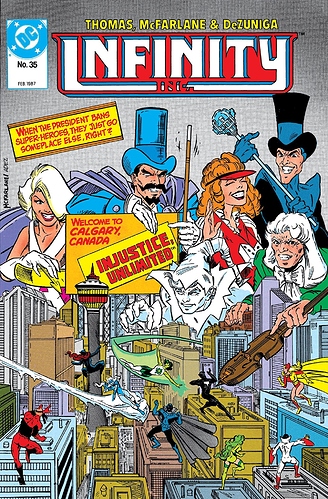 I loved Infinity Inc., but I will admit that Crisis on Infinite Earths basically ruined it as a concept. They are the natural successors of the JSA and the interactions with their predecessors is important. After Crisis, they were just one team among many on New Earth, and what made them unique was further deteriorated once the editorial decision was made to “kill off” the JSA when they were stuck in Ragnarok. And the retconning of Fury’s origin so that she was not the daughter of Golden Age Wonder Woman also didn’t sit well with me. So, back to the OP’s question, anything before the Crisis, starting with the All Star Squadron issues where they were introduced.