What is your preferred comic style?

As I was finishing one series and moving on to another, it brought up an interesting topic in our house: What is your preferred comic style?

Specifically, do you gravitate towards:

I’ve been reading multiple storylines and each has a very different pace and feel based on that core concept. Some characters even benefit from less text in favor of “reading into the illustrations”.

I would love to hear from other comic fans - compare and contrast the styles - from the publish dates to the heroes and universes themselves. Are there beautifully drawn books that you just can’t get into because of the writing? Do huge blurbs of context distract from your enjoyment?

What unique storytelling have you noticed and which do you prefer?

My preferred style would be something balanced. Dan Jurgens is an excellent example of this. His stories work WITH the art, thus you’re immersed in whatever world he’s working on.

First I would prefer text that I could read
Red text on black is Unreadable to me.

Hard to read comics digitally
But unable to go to comic book.store
None near me
Dont have room.for storage
Hard to read as well because of vision.

Excellent points, @TurokSonOfStone1950! Accessibility is so important! Just today, I encountered the problems you mentioned with a few panels in Batman The New 52. 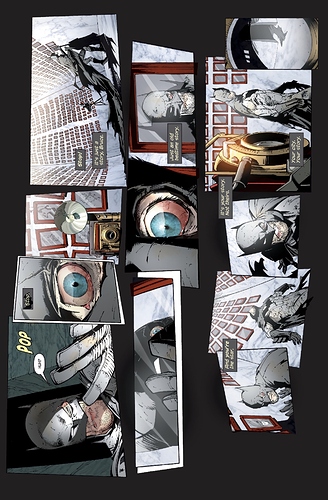 This particular issue uses a lot of interesting tactics like flipping the page and turning it on it’s side for added dimension and drama. Converting comics to digital form can present challenges but reading this book in paper form (which I have in my personal collection) is much more fun than struggling with the orientation on a device. Contrast is also key, which sometimes makes the older comics more appealing simply because they’re easier to read.

What’s an example of a smooth read for you?

Great example, @superby1! I hadn’t read any of Dan Jurgens work but in a quick search, I see that he has worked on Booster Gold and Superman. Here is one piece that I think illustrates that balance you mentioned, which brings the reader through the story in a smooth linear fashion. It definitely keeps the reader engaged (and isn’t confusing or disjointed).

From The Adventures of Superman #456 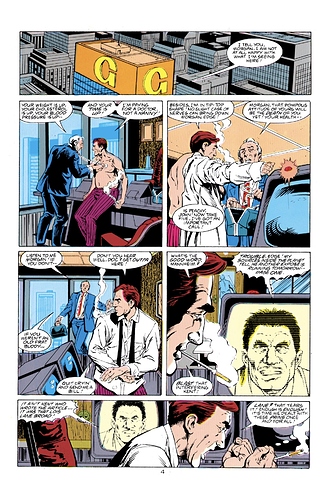 I also like the choice of lettering in this first panel, using color and size effectively. It reminds me of Kamandi: The Last Boy on Earth. 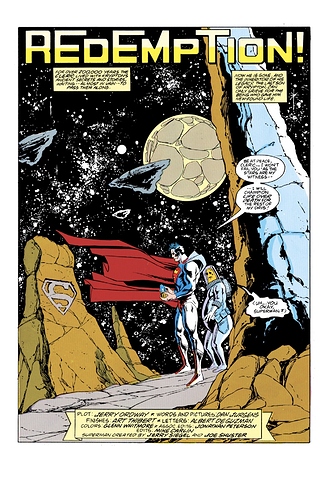 Good art is a plus but secondary to me.

Is there a comic you have read that had unappealing artwork, but such a well-written story that it overshadowed the poor illustrations?

Just looked at a few pages of Watchmen in Comixology whose reader is far superior to the one at DC Univetse. So much.so that I buy the books there rather than use the library at all.

The grid is such that I can see each panel in Portrait view and I can read the trxt easily even without glasses.

Because I read digitally full page or two page spreads with.lots of images and lots of text interspersed are very difficult for the browser to navigate or the reader to appreciate. They really requied a large format book, not a typical comic book.

I tend to have to skip those pages and my understanding of the story suffers due to that.

WOW. I see what you mean. The artwork is aggressive and the speech bubbles are over-colored. The imagery detracts, rather than accompanying to create a cohesive narrative.

This seems like a solid case for what you mentioned, @superby1, where the story and art aren’t in unison. 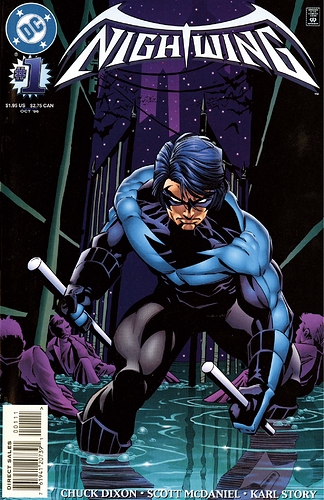 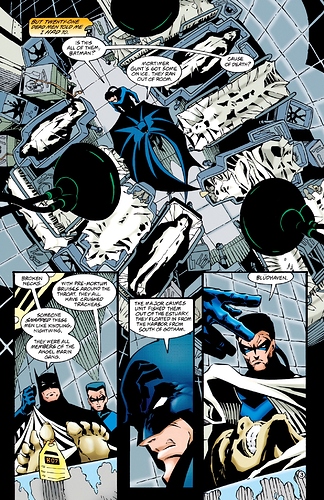 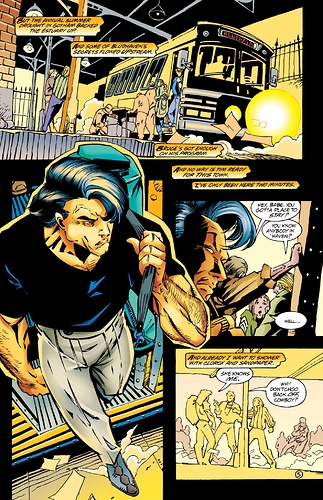 My eyeballs are friggin’ bleeding.

I laughed so loud at this!

Ouch, Frank Robbins. He was past his prime in the ‘70s. He was good back on his comic strip art for Johnny Hazard, but just wasn’t suited for superheroes.

I like balanced storytelling where the art and text work together. Though I do have a soft spot for theChris Claremont’s and Don McGregor’s of the world. Ah, Bronze Age comics, where writers described everything depicted in the panels of the comic.

Before knowing my own preferred comic style, I picked up Batman The New 52 at a local bookstore. I really enjoyed the engaging and detailed story introducing The Court of Owls. Flash forward to my recently finishing the Batman & Robin series. The artwork was amazing (excellent contrast), and with such limited dialogue, it told a deep and amazing tale of the relationship between Bruce and Damian Wayne. After completing that collection, I decided to revisit Batman (The New 52). It was surprisingly challenging to return to the verbose writing and “sketchier” artwork. I had previously loved this book! It was then that I realized how much those two factors matter. I was able to get back into the story and adjust to the new narrator’s “voice” and tone with the understanding that it read more like a book than a traditional comic.

Here are panels from each for comparison. 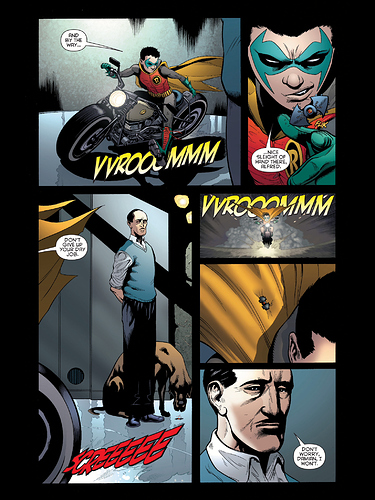 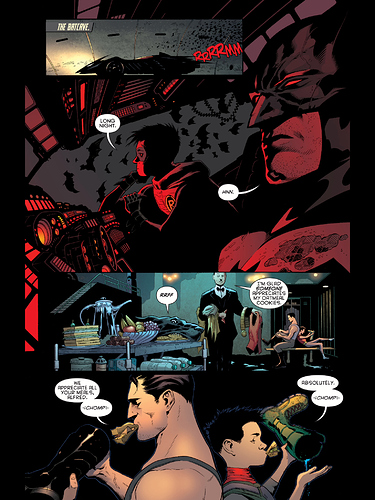 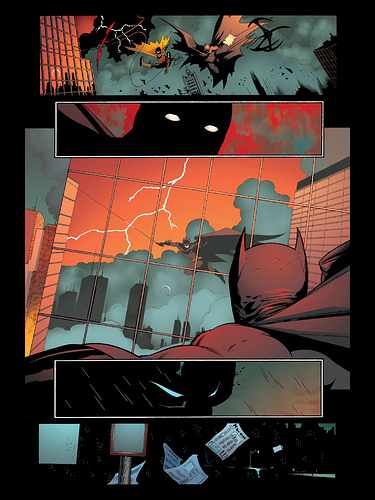 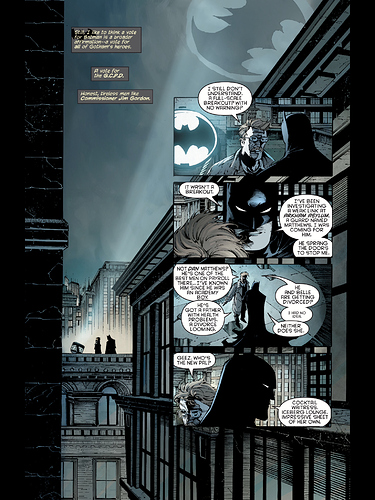 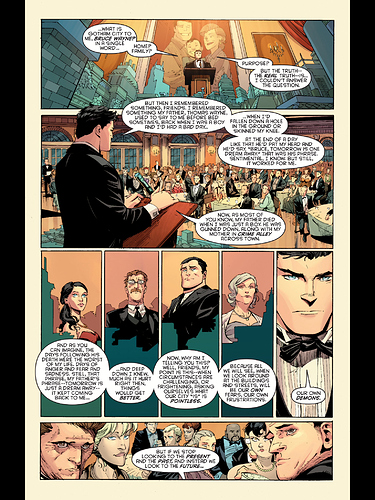 @AustinMace, I know your fan fiction is heavily worded due to the lack of imagery but what is your preferred reading style? I’d love for you to weigh in on this topic.

Do you have other thoughts on Batman The New 52 since that was your foundation?

This is a very good subject.
My brain might explode now…

If done well the story and art should be seemless.

George Perez could compose great characterization. 7 people in a 2.5 x 3.5 panel and each acting or reacting in a way that so suited the individual character. It has a sense of the genre pairings of Valesquez.

Neal Adams has such a great sense of perspective geometry. His anatomy was flawless. He was to comics what Raphael was to renaissance painting. Simply beautiful and elegant.

Jack “The King” Kirby told the story so boldly through his art. He used the pure visual medium to go epic, over the top spectacle, but it was never actually over the top, it just hit you in the eyeballs in such a way that could not be ignored. You might love or hate the aesthetic, but the one thing you can’t do is ignore it. The Salvador Dali of comics.

So there are 3 very different styles, all of which I prefer. That combined with the limitations of the lousy paper and offset printing constraints. All three are masters of their craft.

This is a bit of a non-answer, but I don’t have a preference for either. Some stories seem best suited to a visual narrative, while others to lengthier dialogue/text. But even if I don’t care for the art, if a story is well written, I’ll still enjoy it (and vice versa). I’m reading Cass’ first Batgirl run and the Nightwing series mentioned above right now, and jarring art but good story is often the case.

I do, however, really enjoy art that goes beyond conveying action. An artist who has the time and imagination to pepper a story with symbolism, Easter eggs, little jokes, etc., wins me over even if I don’t like their actual art style. It makes re-reads so much more satisfying, because you can always keep an eye out for what you’ve missed.

I definitely have a lot of issues with modern decompressed storytelling. The books are way too short and it takes a million issues to cover a story that could’ve been done in two even as recently as the early 2000s. So I wouldn’t say that I like a lot of images and less text.

But then sometimes you run into a book like early New Teen Titans that just doesn’t know when to shut up and let the art speak for itself, and every line of dialogue and narration box goes on for paragraphs at a time, and I’m not sure I like that either.

So really, balance is what I guess my answer is, but what makes the difference for me is when both the writing and the art do what they need to do efficiently. Old books have more dialogue than they need and feel clunky and ponderous (but have the advantage of fitting a complete story into a smaller space). New books have more art than they need and feel brief and insubstantial (but have the advantage of being able to do some cooler, more “cinematic-looking” visuals with all those empty issues). I think there is a happy medium in terms of pacing and it was standard for quite some time. Even when the art wasn’t good (Nightwing, to use an example that people were talking about before), it was still paced well, because I think a lot of this happens in the script. And when everyone writes for the trade, they leave the plot pretty insubstantial and basically just tell the artist to work three times as hard to keep everyone amused for six issues that should’ve been two. And the artist may or may not be up to the task, but even if they are, it doesn’t make up for the writing deficiency, it just covers it up.

An artist who has the time and imagination to pepper a story with symbolism, Easter eggs, little jokes, etc., wins me over even if I don’t like their actual art style. It makes re-reads so much more satisfying, because you can always keep an eye out for what you’ve missed.

Excellent point, @CynicalPink! Two examples that I have found to be revolving re-reads are Batman: The Long Halloween and Batman: Ego. They are both known to be classics but the quantity and variety of Easter eggs are superb, which make them easy to pick up and enjoy again and again.

What is your favorite example?

Wow, such a well-written and thorough response @BatJamags! Thank you for joining the thread! I agree with so much of this, finding many of those concerns in what I’ve been reading. This part of what you said rang most true for me.

New books have more art than they need and feel brief and insubstantial (but have the advantage of being able to do some cooler, more “cinematic-looking” visuals with all those empty issues).

And when everyone writes for the trade, they leave the plot pretty insubstantial and basically just tell the artist to work three times as hard to keep everyone amused for six issues that should’ve been two. And the artist may or may not be up to the task, but even if they are, it doesn’t make up for the writing deficiency, it just covers it up.

Perhaps that’s why I get bored with some of the newer “flashier” titles - because they are lacking any substance that would keep me entertained and engaged. It’s difficult to connect with these “stories” if there’s nothing to latch onto.

I liked the way Jim Aparo laid out his stories.

Verbally, visually, or both?

Cool example, @dogwelder9! I really like the way that the speech bubbles and the images lead seamlessly from panel to panel. There have been some comics where I had to re-read to find the correct sequencing of the conversation. When it becomes all about the show, it can take away from not only the story - but also the reader experience. I don’t have much patience in those cases, and if it’s that lackluster, I’ll stop reading entirely.