What is The All-Time Greatest Batman Costume

Batman is a hero who has had nearly as many Batsuit variations as he’s had artists. But everybody has a favorite… and if you don’t know yours, now is the time to do some soul searching and figure it out.

So, which of Batman’s costumes are your favorite, and why? Your answer may be featured in an article!

Rainbow Batman. Also, the modern all black number. Never complain about cutting out the blue and gray.

Jean Paul Valley’s Batman costume is by far my favorite. It is such a departure from what we immediately think when we think of Batman, which makes it worth noting.

Batman Beyond for me. So sleek and minimal!

Vapor kryptonite Batsuit from Injustice 2 would just look stunning at night, in combat or in slow motion! 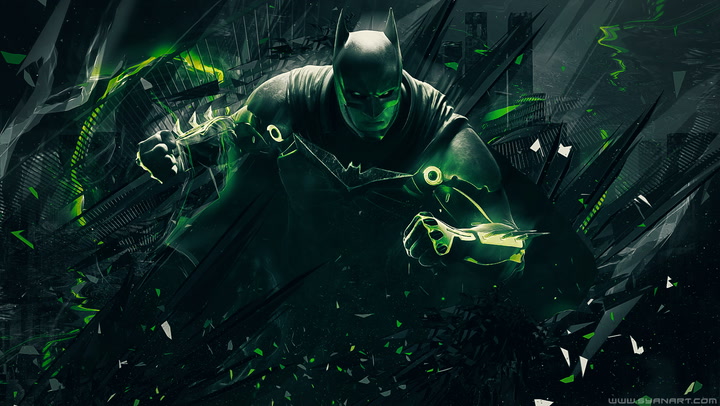 NES Batman is the best Batman ever. 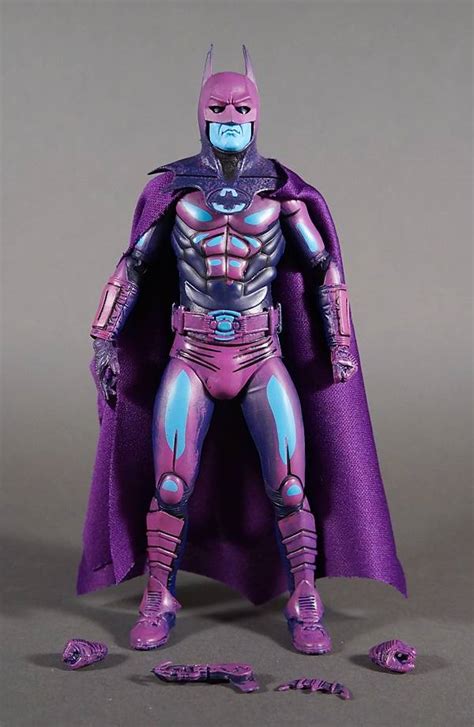 In my opinion, Batman is one of the more versatile comic book characters when it comes to his costume. The classic version works and so do the more updated ones. It’s even acceptable for him to have more than one costume in a given story…certain situations may call for special suits or more armor. Having said that, it is difficult for me to choose; he looks good in so many different variations. I am more partial to the oval yellow and black bat symbol though. I like the contrast it gives to the costume and there’s also nostalgia coming into play. My favorite batsuit with that symbol is the one from Batman Incorporated (a comic that I have yet to read, but I have seen enough images). It mixes that classic symbol with a more modern look that is full of little details to dissect: the seems, the intricate utility belt, the tactical looking gloves. I like it! 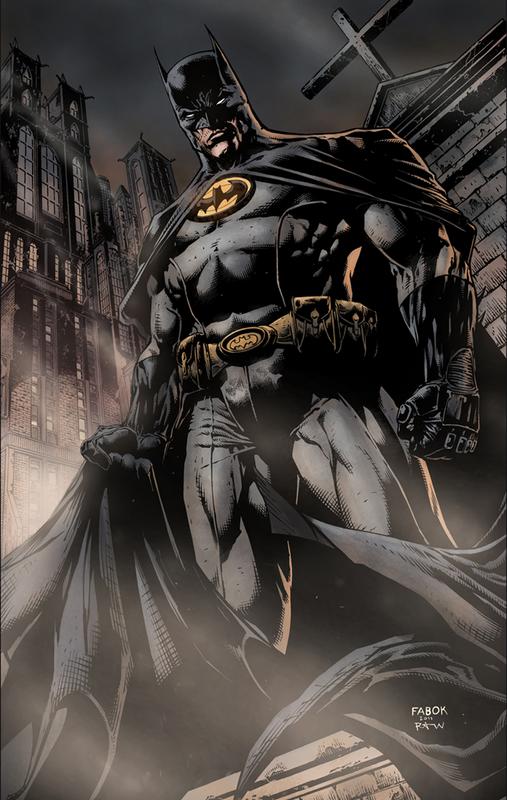 Blue, black, grey, and a yellow oval. There’s never been a better Batman look since.

B:TAS second best, then pretty much anything Jim Lee, particularly his variant cover for JL #1 awhile back

In live action, Kilmer’s panther suit is my fave, nips and all, though I prefer Keaton’s original cape and cowl. In animation, the costume from Under the Red Hood wins out. In the comics, it’s Bat-Baby, of course. Thank you again, Bill Finger.

I’m only crying because this is the most pressure I’ve ever felt in my entire life. I’m sorry, 1989 Batsuit. I’m sorry! 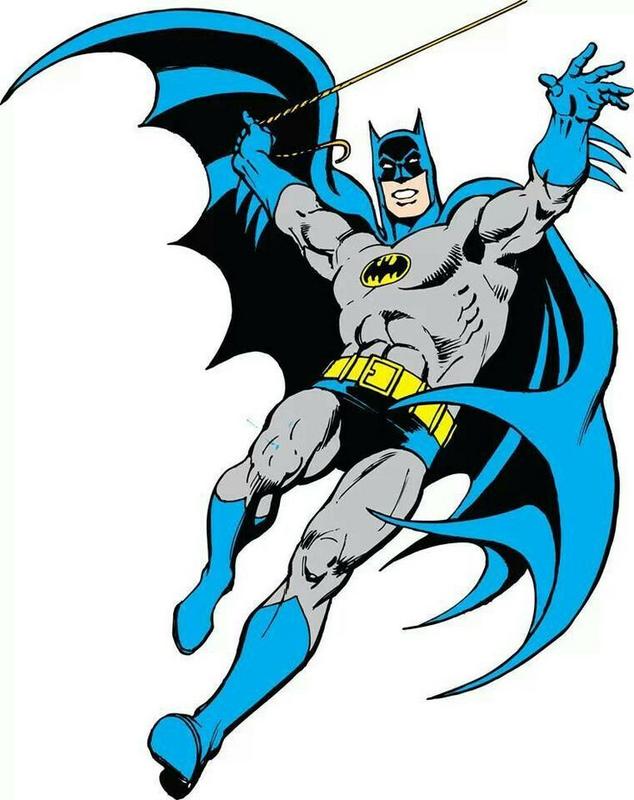 @moro
I think a design with a lot of detail works well for a pin-up or the like, but in practice, on the page, I tend to think it just clashes with the artist’s duty of faking motion where there isn’t any. It makes you notice when the piping is out of place, and gives you reference points for the anatomy (i.e. when you compare a panel from a comic to a cover with the same costume on display and notice that the character is in an impossible position because the piping is out of place, and therefore so is his left pec, or whatever). I don’t know, it always takes me out of it. I like very simple, iconic, skintight suits without all the armor stuff that tends to get tacked on. That said, as I mentioned above, that detailed look does work for a still image, such as a cover or print or movie poster.

Comics: Jim Aparo’s rendition of Batman’s togs from the 70’s and 80’s. It’s the classic blue and gray look, it’s elegant and he just looks cool under Mr. Aparo’s stewardship.

Dubbed the Panther Suit during production because of how sleek it was, this is the quintessential live action Batman suit for me. Black rubber never looked so good, before or after Batman Forever.

TV: A tie between the Batman: The Animated Series and The New Batman Adventures iterations.

I love me some Filmation and Hanna-Barbera style Batsuits, but the first two looks from the DCAU are homeruns.

BTAS perfectly exemplifies the blue and gray look, while TNBA does the same for the black and gray style. I’m also partial to the TNBA character design as Batman was a larger and stronger tour de force of skull cracking, jaw-adjustment justice on that show.

Toys: Clearly the below is Batman’s best look in plastic, bar none. Gooooo released in 2004 by Mattel banana yellow Battle Sled Batman! 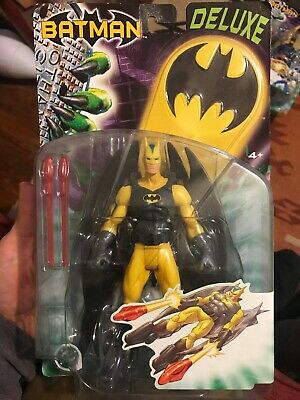 In all seriousness, this is one of Batman’s very best looks in toy form. I present to you Zipline Batman, from series 1 of Mattel’s '03/'04 six-inch scale Batman line (their very first 6" scale DC line, BTW).

He was sculpted by the Four Horsemen and is wonderfully detailed in every way, including Hush style treads on the bottom of his boots. Zipline Batman is a work of art. 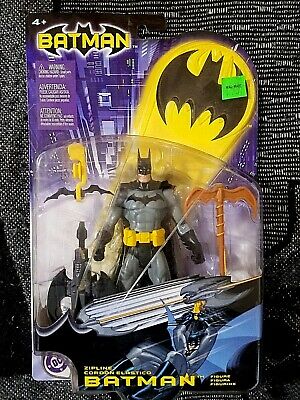 @Vroom
Actually, yeah. That is a pretty wonderful Batman figure. It’s got the accessories you want Batman to have (functional grappling hook stuff and a batarang), and none of the stuff you don’t want him to have, but that he so frequently does (guns, basically). Also, just the costume design is appealing. Trunks, yellow belt, and medium ears (not too long, not too short). It looks very good. Very, very good.

I’m partial to Iron Winch Batman myself. It’s Keaton’s Batman like I’d never seen him before.

The armor from “Justice”

B. Iron Winch Batman was my favorite DKC figure when I was a kid. I badly wanted a blue and gray Batman figure but the Super Powers version was long gone from retail by 1990, so there were no other options.

Then I waltzed into the toy aisle of Target one day, and bingo, bango, Boba’s cooler than Jango, there he was! Iron Winch Batman, a brand new blue and gray Batman action figure, which I promptly yoinked off the pegs and payed for with birthday scratch from my grandparents.

Iron Winch Batman (or Sky Winch Batman as his Batman Returns reissue was known by) is still one of the best Kenner Keaton Batman figures. A perfect marriage of comic book and movie elements that retailed for $5.99 at most stores (probably $7.99 at Kay-Bee).

I mostly have a checklist for my perfect batsuit.

I also really loved the N52 suit when Capullo or Jason Fabok was drawing it. Did not like Jim Lee’s original concept for it.