What Hero Would You Like to See Go Bad?

What Superhero would you like to see go bad even if it was for a short time? We have seen what it would be like if Batman , Superman, and Green Lantern went crazy. I would like to see the Flash go nuts full on crazy . The ramifications of the universe would be huge and it would take a lot to stop him. The timeline would be in jeopardy of changing every single thing to not just the hero’s but the innocent people would be a horror show; no one would be unaffected. So what hero do you want to see go evil and why?

Ideally, no one. If a must… anyone… but… Superman. We’ve had enough evil Supes with Injustice.

I think the reason we’ve seen Superman go bad sort of often is because he would be the scariest, but you know who else would be terrifying if he flipped? Martian Manhunter That guys powers rival Supe’s, and he has some extras thrown in like invisibility and shape-shifting. He would be terrifying as a baddie.

I think we have a good idea of what heroes look like when they go bad. It’s usually a depressing result. I think we have enough of villains in the world if comics.

Now, if we’re talking a single issue of mind control… I’d like to see everyone scramble to stop someone crazy powerful like Firestorm.

Agreed, Superman being SUCH a Heavy Hitter combo with his HUGE Popularity makes things like Injustice and RedSon interesting to the General Reader…
Martian Manhunter is an EXCELLENT ANSWER, other than his easy take down with a can of hair spray and a bic lighter. He could kill and replace Politicians, infiltrate ANYTHING. Read Top Secrect Info from the minds of military officials. I think the DC Universe is Lucky to Have had the Last Green Martian be Such a GREAT GUY!
Not my pick tho…let me think

Blackest night, We have a Bad Zombie Ronnie Raymond…

Whoever is the favorite hero of the person in charge of turning a hero evil. Eat your own dogfood.

Oh, but never Kara again. I see another black suit I’ll take it to the mat.

@jsmsiggy I’m a HUGE Flash Follower, and I have to say, we have an Idea of that already with my Namesake… We have a Reverse-Flash who’s link to the negative speed force give him MORE nifty Speed Based Powers for him to screw up the world with, I.E. Time Travel with no Cosmic Treadmill and so on…(compared to Barry, Wally also had his moment in the Shadows in Heroes in Crisis, and boy did he plan out his crimes!)
I really like Ralph’s Choice and it’s making it hard to come up with my own!

How about Swamp Thing, Has he ever tried to wipe the planet clean of humans so the Green could Thrive? That’s possibility. He has MASSIVE POWER. I don’t know if it was ever covered, but if he just got tired of Man destroying the Green, could he not just destroy all the world cities in Big Sink holes and stuff?

How about Swamp Thing

During Alan Moore’s run he pretty much destroyed Gotham City, and had plans to take out all the humans in the city.

So I’ll Get Back to yall… Thanks for the info

@PR0FESS0RZ00M I know we have evil speedsters reverse Flash , Zoom, and the others ; I want to see the best Flash go bad or severe mind control. If I had to pick another hero Aquaman would be another hero that would be awesome to go evil for a time !

I agree. There was one espisode of the “Dark Flash” which was pretty cool but i do wish we got to see more of the flash being bad and going crazy.

I have to admit that I really don’t like storylines where heroes go bad. If one had to go bad, I definitely don’t want it to be Superman or Batman. We have definitely had too much of that!

How about Krypto flying around pooping on people’s lawns and biting mail carriers.

Perhaps one of the most heartbreaking yet ultra engaging “what if” scenarios regarding good heroes going big bad would have to revolve around everyone’s fave Tamaranian, Starfire. If Robin/Nightwing is their courage, Cyborg is their tenacity, Raven is their soul, and Beast Boy is their levity, Kori is the Titans’ heart and to have to watch her storied history of unwavering goodness and light be tarnished by the imbuement of evil into her persona would be the very essence of tragedy itself in the dramatic sense. Sooo sad but an incredibly amazing page turner none the less. 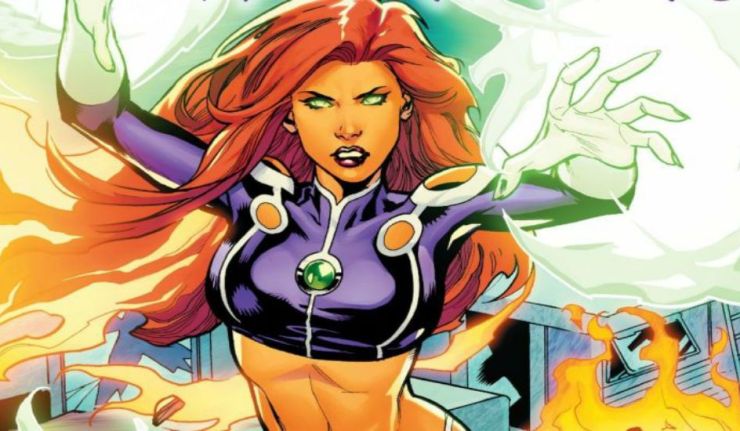 Krypto, the scourge of the neighborhood.

Black Canary- she nearly killed Superman and definitely holds back her power daily. She could do some real damage.

Booster Gold he’s always been kind of a comedic character. I don’t think anyone would see him going evil. That’s the most important thing in a good guy going bad twist.