Well, June is a big month for Batman, the release of the graphic novel series Batman: Earth One vol 3, Catwoman soul stealer (graphic novel) (I am struggling to get through the book), and the release of part one of the long Halloween film.
However, this film, like the Live-Action Batman film, takes place in year two. However, a lot of cannon has changed between 1996 and 2021. a lot of changes have happened to the events of year two of batman’s operations. This is when the War of Jokes and Riddles happens, Batman and Catwoman sleep together for the first time, early on it is also before the war likely that the Designer appeared to teach the rouges…and the biggest change of all, Selian figured out Bruce Wayne was Batman in year one so she has always known Batman was Bruce Wayne in current cannon. These changes could drastically alter the Long Halloween.

One big change I noticed in the sneak peek special on Justice Society: World War II so far is the inclusion of Barbara Joan Gordan, aka the future batgirl, is in the film. Catwoman and batman meet where Falcone money is stored. It seems Batman chases Catwoman for the first time. They already have a bit of a relationship in the long Halloween book. They seem to be meeting for the first time in this.

I feel part two will be a lot different. We may get a war of jokes and riddles adaptation.

My fortune teller says everything. In the film Batman will battle a very fat man named “Halloween” who is actually mind controlled by Bob, from the 1989 film.

Just because all those stories have been released in the years since Long Halloween came out doesn’t mean they’ll have an effect on this adaptation. I don’t doubt that there’ll be some changes from the comic, even if they’re just small ones, but there’s no reason to make such a drastic change and adapt a completely different storyline in part 2. Then again, there was also no reason for the Hush movie to completely abandon the ending of the original and turn Riddler into Hush, and yet they did anyway, so who really knows what the hell’s gonna happen?

Barbara Joan Gordan, aka the future batgirl, is in the film

Also this isn’t Babs but rather Jim’s 1st wife, also named Barbara. She didn’t have a big role in the original story but she was still there nonetheless, so her inclusion in the movie makes sense

she mainly served as a foil to Gilda dent, BUT what they do with Gilda may be something that could be changed just guessing off things that have been changed in other batman adaptations (ex Hush), so that they have Jim’s wife could be telling or I am reading way too much into this 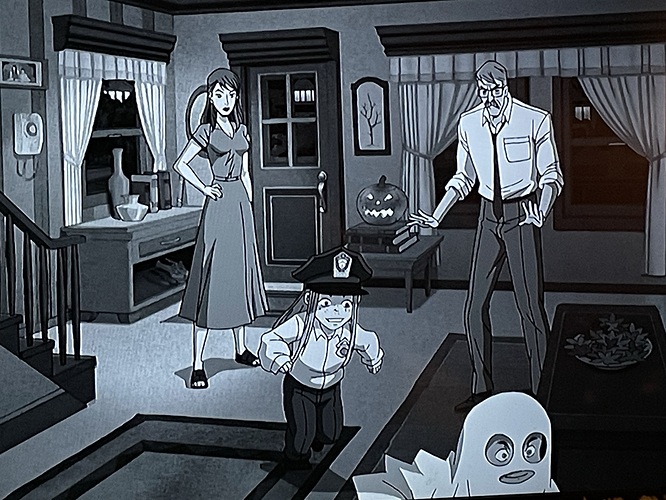 Both adaptations of Death and Return of Superman were greatly altered (its the one Superman comic ark I actually read.)

With so much material you have to shorten it for film.

True, They hit the high ponits of the ark in the second adaptation, but Doomsday using superman DNA. I did not like he was never Kryptonian in the original source material. however, I view it as some kind included dormant secondary DNA similar to mitochondrial DNA that was included in all Kryptonian cells due to the cloning process they had used to propagate.

I’ll admit I wasn’t aware of that specifically, but I highly doubt Babs and James Jr. can have any sort of significant impact on the story at that age. I figure this can be chalked up to a relatively minor change from the original comic. It’s certainly not like Batgirl is gonna be appearing in either part

One possible big change from the comic that does intrigue me is whether or not the ending will stay vague on Holiday’s identity. We never did get a definitive answer on who actually committed all the Holiday murders (save for Sal Maroni and Carmine Falcone’s deaths at the very end of the story), but this movie has a chance to change that. I know I’d personally enjoy finding out for sure who Holiday was, as the vagueness of their identity always frustrated me, but I also know there are plenty of people who love the open-ended nature of the mystery. I’m not sure whether the majority of fans would prefer a closed or open mystery, but whatever direction the movie ends up going, I’ll be very much interested to see what they decide

I said future batgirl because I knew she was still too young(blushing emoji here)…however it could change Dark Victory if they include that in the continuity.

Maybe I’m boring, but frankly, as long as none of their changes are just for the sake of change (which is a choice lacking in integrity that DCAU has had problems with in the past shudder) it really doesn’t matter. I’d rather there be as few changes as possible, whilst recognizing that it will have to cut some components, it doesn’t have to ‘change’ things. And I hope they don’t.

Well, personally, I am hoping we do not see batcat get broken up in this universe. They’re my favorite ship, but they also have been broken up way too often. These two have been dancing around each other for 81 years in March, and given everything the writers do to Batman, he deserves to be permanently with his wife finally canonically. Superman and wonder woman does not nearly go through the same hardships as Batman.

ehh part of the fun for me is not knowing

I just realized something else, again from the sneak peek, Chinese triads are in this film. In Batman Soul Of The Dragon, Lady Shiva controls Gotham’s china town, and I wonder if she will make an appearance as I would love a Lady Shiva Vs. Batman or Lady Shiva Vs. Catwoman fight.

As I understand it, Holiday was three people, Harvey, Gilda, and Roberto.

I just noticed James Jr is also a lot older than he should be. He should be only a few months old if this was going right off the book as it’s the boy’s first Halloween in the book.

Personally, I hope for batman’s happiness at the end of both parts and the possible dark victory. with a son and a new wife rather than another heart riping moment like in hush, let the bat and cat get together in and stay together in year two, and up lats have batdad and catmom, take care of the baby birdies and batgirls