What Did the Joker Actually Do to Jason Todd?

Jason Todd, as we all know, went through numerous amounts of horrific torture by the Joker. But was there something more?

In the Arkhamverse, I feel it’s implied that Jason was molested by the Joker and if not him, other inmates in Arkham Asylum. Many people have said online that his violent anger could definitely be caused by many aspects, including sexual abuse. Even in the comics, I feel this is implied as well. 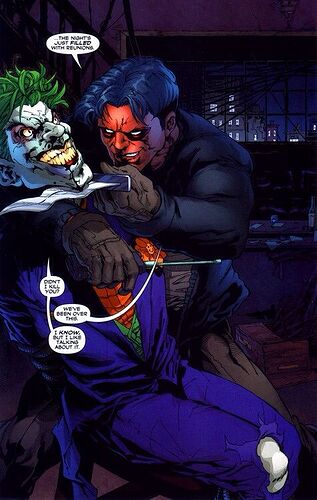 The only thing that I really know is that he was tortured by Joker. Maybe @TheWifeOfJasonTodd would know more

Even in the comics, I feel this is implied as well.

Their confrontation in the comics was too short for anything like that. It wasn’t a prolonged torture as it was in Arkham Knight. Plus, his mother was present in “A Death in the Family,” and while she did her best to pretend that she didn’t care what the Joker was doing to her son, it would be a bit much to suggest that she would be standing there and nonchalantly smoking her cigarette as the Joker did THAT to Jason.

In the Arkhamverse, I feel it’s implied that Jason was molested by the Joker and if not him, other inmates in Arkham Asylum.

I can’t say I ever got remotely that sort of implication from his Arkhamverse background. We specifically see the sort of physical abuse Jason was subjected to while he was trapped at Arkham in the Genesis comic, and that was certainly more than enough to drive him toward his violent anger later on. But I really don’t think there’s any sort of implication of sexual abuse that was hinted at in either the game or the comic, or really any other continuity for that matter 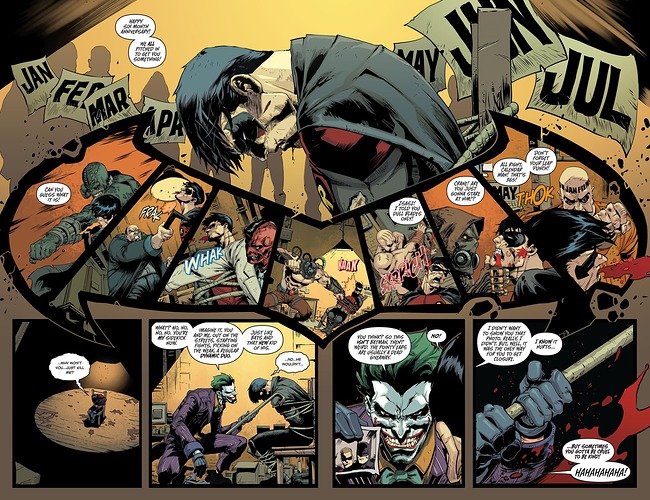 Ok that makes sense. I’ve heard some people online say that was the case, but I guess not.

Honestly, I think it depends on which timeline/continuity. If it was the classic Death in the Family, then I think what happened in the story is what happened. I wouldn’t be surprised if some details have changed since then because comics tend to update their stories, however as of now Jason only mentions being beaten by the crowbar and blown up, and usually in flashbacks that is what we tend to see.

The Arkhamverse however… that could be a different story. The video game only told us so much, but Arkham Knight Genesis showed us that there were more villians involved than we were told. We were shown more details on ways and how he was tortured, but that was only 8 issues and showed us some things, and Jason was held captive for a year. There could have been things that were not shown still.

I won’t say that certain things didn’t happen, but I think it depends on the universe/story. I think main canon comics (at least DC since I can’t speak for Marvel) I think they try to avoid that specific subject in terms of it being something that could be very triggering for some readers, but at the same time I know that there have been some scenarios, such as what happened to Nightwing with Tarantula (if I remember her name correctly), and of course there was the infamous scene in The Killing Joke where fans have debated over if something more had happened to Barbara that we were shown. I think that DC is very hesitant to tackle with that subject matter, and when they do they try to handle it carefully, like with Jane’s backstory in Doom Patrol.

As far as I know of currently, Jason was at the very least beaten by a killer clown that was laughing hysterically the entire time and was taunting him, and then blew him up before Batman could reach him in time. I think because Jason has always had a rough life and this was a final straw for him when he came back and found out that Batman didn’t kill the Joker in return. But who knows, maybe one day there will be a story, even if it isn’t canon, where they might want to explore this subject as long as they handle it with care and with caution, because this is a subject that’s triggering for a lot of people. I imagine it would be a Black Label story situation.

I will admit, I know that there have been some fan fictions that do imply this in their versions of Jason’s past for their stories, and it wouldn’t surprise me if there actually were online theories about this. But as of right now nothing has ever been officially confirmed.

Right, but 1 thing that I do agree with you on is the fact if they ever decided to do a story of Jason being sexually abused by the Joker, it would definitely fall under a DC Black Label print. It’d def be a strong push because it would definitely change the way people feel about the character himself.

Maybe, although I’ve learned that most people who hate Jason as a character have never read the current version of him. Those people hate the 2005 version, but have no idea who New 52/Rebirth version is. They don’t even hate read, surprisingly.

He ate my son and left the corpse for me to find.