What DC Property Would Pair Well With The Rocketeer?

I’m not a big fan of crossovers involving non-DC characters but this one came to mind.

I’d say the JSA would pair well with Mr. Secord’s alter-ego. I’m sure Peevy would love to tinker with S.T.R.I.P.E., while Jenny would make friends with Court, Ma Hunkel and the rest of the team in no time flat as Neville Sinclair would probably team-up with Vandal Savage or Kobra.

Oh my God Vroom your making me drool! I think the JSA is a great fit!!

JSA is the best option I think for sure but I’m gonna throw out this one
Doom Patrol. I know wacky but it could be fun!

I think having him team up with Katana would be pretty cool. or Shadow.

A Rocketeer and Shadow crossover is so obvious, I’m surprised that it hasn’t been done already.

Yeah It just popped in my head I was trying to think of people with opposite skills that would complement him and not have superpowers that would render him useless. The DP team up would be fun also I think. I know he doesn’t fit the group or is a misfit but that would be the appeal I think. Jenny would hit it off with Rita and Peevy would have a great time with Cliff and the Chef I think. I would love to see Crazy Jane interact with Secord. Sinclair could work with the DoN or whatever they are called now.

I love Shadow in the Longbow hunter story.

I’d love to see a movie with The Shadow and The Rocketeer too.

Billy Campbell and Alec Baldwin would have good chemistry with each other.

In one of the Rocketeer stories(I believe it’s “Cliff New York Adventure” he does meet Lamont Cranston, The Shadow! 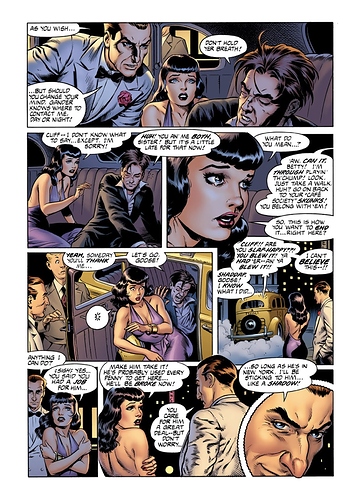 @Squatteam1 Say, that’s keen! Thanks for pointing that out.

This talk of a meet-up between mssrs Cranston and Secord reminds me of the Rocketeer/Spirit: Pulp Friction mini that came out in 2013 and was published by IDW. That looked like a fun read.

Batman is like the color black. It pairs well with everything.

I think the Rocketeer would make for a great multigenerational story arc, whereby the legacy of the Rocketeer leads to the introduction of the bulletman family into modern DC Canon, with guest starring appearances and teamups with the JSA and the Blackhawks, among others…