What CW show should I start watching first?

I now know how long it will take to watch everything, but now I need to know what to watch first and what order to watch them in.

This has the correct order: https://arrowverse.info/

I would definitely start with arrow first if you want stuff to make sense.

You could just watch shows by what character you like or what genre you’re into (like Flash is you don’t want something as dark and gritty as arrow, or legends if you want something fun and campy).

Thanks, I got a lot of watching ahead

Just watch what looks interesting to you. They’re all pretty self contained until the crossover episodes, I would say watch Flash seasons 1-3, Smallville, and nothing else but that is just my personal tastes. Also, don’t be afraid to just quit on a show, none of these really “get better” as they go so if you find that the show has become a chore to watch, don’t stick it out waiting for it to get better or for some kind of “completionist” honor badge.

If you like all characters I would watch in the order they aired for it to make most sense (starting with arrow and then switching between them).

If you only want to watch one or two shows maybe just watch the whole show from start to finish. The only episodes where you will feel lost are the crossovers.

Themes of the shows:

Smallville, as it was technically the first CW DC show, while also being the last of The WB era (in terms of DC content airing on The WB when the branding change occured, that is).

As for the CW Verse, Arrow as it’s the beginning of everything in that universe.

I also say “whichever you want”, as there’s no point in watching a show (or shows) that you aren’t interested in. Skip to the good stuff and enjoy!

It’s a no brainer: Black Lightning.

As for the CW Verse, Arrow as it’s the beginning of everything in that universe.

This isn’t entirely correct given that Berlanti and Co. grafted the CBS Flash series starring John Wesley Shipp into the Arrowverse.

If you want to watch every “core” series that occupies the Arrowverse shared continuity, you need to watch the following:

The DCU Originals series Titans, Doom Patrol, Swamp Thing, and the forthcoming Stargirl also exist as part of the Arrowverse’s current in-narrative Multiverse, as do Smallville (available on Hulu), the Christopher Reeve/Helen Slater/Brandon Routh Super Family movies (the first of which - Superman: The Movie - is available here on the DCU service), and the “DCEU” movies that began with Man of Steel.

That’s an insane amount of TV to watch as part of the Arrowverse, and all the ones you mentioned after the bulleted ones are completely optional. At the end of the day, the core Arrowverse shows are Arrow, Flash (CW), Supergirl, Legends, Black Lightning and Batwoman. Vixen and Constantine definitely help to flesh out the universe, but you can easily watch the main shows w/out them and not miss anything. Earth-90 Flash from the CBS show only makes a couple of appearances, and while they’re definitely important to their respective crossovers, there’s plenty of context given for anyone who hasn’t seen that show. Even Freedom Fighters has a dubious status, as Marc Guggenheim admitted that there are several direct continuity errors since it wasn’t actually created in tandem w/ Crisis on Earth-X.

The first season of The Flash is probably my favorite season of superhero tv ever (nostalgia not withstanding), so I highly recommend it. However, if you want to immerse yourself in the Arrowverse, then start with Arrow season 1 and watch everything pretty much in the order aired.

At the end of the day, the core Arrowverse shows are Arrow, Flash (CW), Supergirl, Legends, Black Lightning and Batwoman.

Every producer involved with the Arrowverse has repeatedly stated that CBS’ Flash series, NBC’s Constantine, and the two animated series are officially considered to be integral and equal parts of that shared continuity.

Fans can pick and choose which parts of the “core” Arrowverse they want to experience, but they do not have the power to dictate what constitutes that “core”, and the 10 series I listed as part of my bulleted list have been officially and repeatedly established as being the series which form the narrative nucleus of the Arrowverse as a shared continuity franchise.

If they were considered to be of equal importance as those 6 shows, they would be live action and either on the CW or directly integrated w/ the CW shows from the very beginning. I’ve never watched the 1990 Flash series or the entirety of Freedom Fighters, and I can tell you w/out a doubt that they’re not necessary to understand everything that’s going on in the Arrowverse.

If they were considered to be of equal importance as those 6 shows, they would be live action and either on the CW or directly integrated w/ the CW shows from the very beginning. I’ve never watched the 1990 Flash series or the entirety of Freedom Fighters, and I can tell you w/out a doubt that they’re not necessary to understand everything that’s going on in the Arrowverse.

Everything you just said is entirely and solely your opinion and is absolutely contravened by the people directly responsible for creating and expanding the Arrowverse.

The medium and platform on which each of the “core” Arrowverse series is presented has zero bearing on the status of said series as part of that shared continuity.

Again, you are free to determine which parts of the “core” Arrowverse you want to experience, but you choosing not to partake of certain series does not change their official status as part of that “core”.

Everything you just said is entirely and solely your opinion

I can easily say the same thing about your argument. All I’m trying to say is that while these other shows outside of the main 6 can certainly enhance the viewing experience and are recommended, it’s inaccurate to say that they’re completely necessary. Looking at CBS’ Flash, for example, you simply can’t say that a show which started and ended over 20 years before the Arrowverse even began is now just as important to the universe as the shows that were more firmly entrenched in that world to begin with. I’m curious as to which producers you’ve seen have claimed that the show is just as important as Arrow, CW Flash, Legends, etc. I’ve seen them talk about how it’s part of the multiverse, but never that the series is on equal footing as those other shows.

I can easily say the same thing about your argument.

And you would be factually wrong.

Everything I have outlined has been repeatedly stated by every single person directly responsible for the creation of the Arrowverse… Period.

It’s just hard for me to believe your argument w/out any examples of said creators supporting that idea, which I haven’t been able to find thus far.

Then you’re not looking hard enough.
Re: Constantine

When Matt Ryan first guest-starred on Artrow, both Marc Guggenheim and Wendy Mericle explicitly confirmed that his appearance directly tied the already-cancelled Constantine series to Arrow and its associated shared continuity. 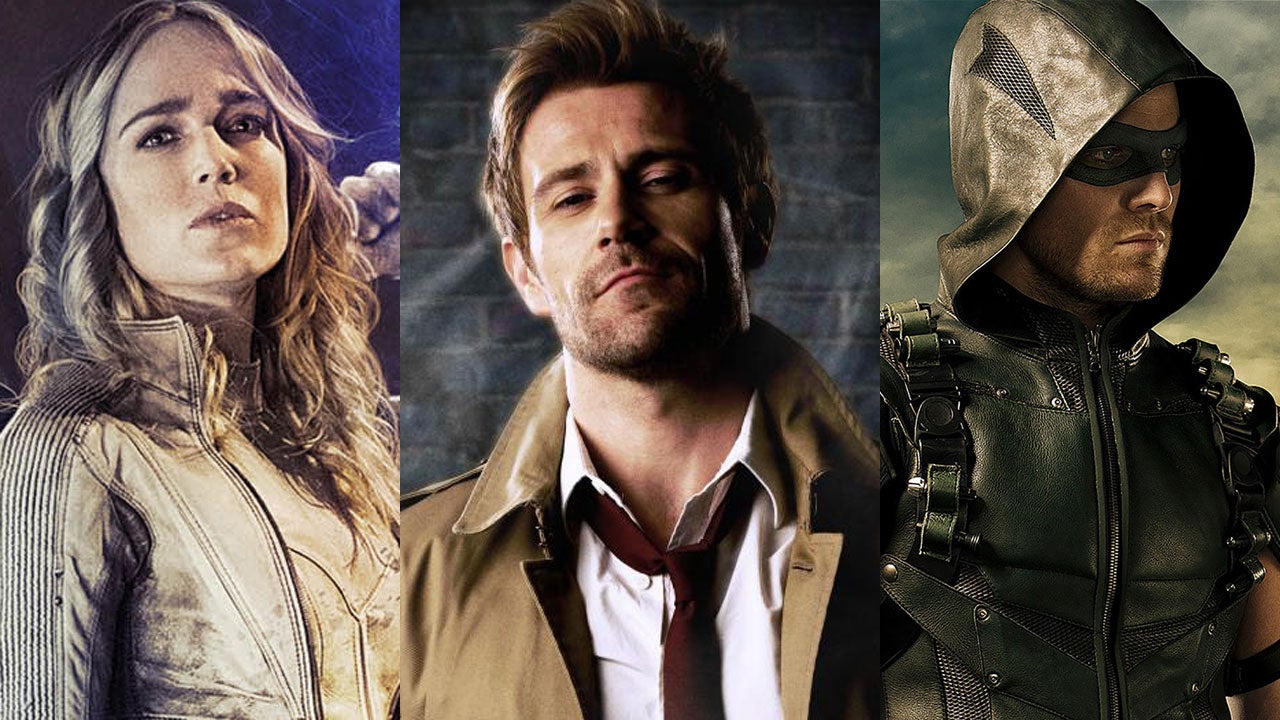 Arrow's executive producer on the occult DC character's role and whether he might appear more than once. Marc Guggenheim on The Infinite Adventures of Jonas Quantum, Constantine on...

Marc Guggenheim tells us about his new comic series The Infinite Adventures of Jonas Quantum and the addition of John Constantine on Arrow.

Re: CBS’ The Flash
The first season of the Grant Gustin Flash series hired Amanda Pays to play a new version of her character from the 90s Flash series, Tina McGee, and subsequently followed suit with Mark Hammil as The Trickster (also Season 1), Vito DiAmbrosio as Anthony Bellows (also Season 1), Alex Desert as Julio Mendez (Season 3), Corrine Bohrer as Prank (Season 4), and even John Wesley Shipp himself as Barry Allen (Seasons 2, 5, and 6, as well as Supergirl Season 4 and Arrow Season 7). The Earth-1 version of McGee has also continued to be seen or mentioned in each subsequent season of the Gustin Flash series.

Marc Guggenheim also explicitly stated that John Wesley Shipp’s Multiversal version of Barry Allen from Elseworlds and Crisis on Infinite Earths was the same character he had played on the 90s Flash series.

The CW Flash series also used archive footage and/or imagery from the 90s series in relation to appearances from characters associated with said series in every instance that one of said characters appeared save for Vito DiAmbrosio’s appearances as Anthony Bellows and Alex Desert’s appearance as Julio Mendez.

Re: Vixen
Mari McCabe has appeared in Arrow Season 4 and Legends of Tomorrow Season 3, and been mentioned in Arrow Season 4 and The Flash Season 4. Her backstory and powers were also directly linked to the Legends of Tomorrow characters of Amara Jiwe and Kuasa. Stephen Amell, Grant Gustin, Katie Cassidy, Emily Bett-Rickards, Victor Garber, Franz Drameh, Carlos Valdes, and Brandon Routh also all reprised their respective roles in guest vocal roles during the animated series’ two-season run.

Re: Freedom Fighters: The Ray
The crossover episode “Crisis on Earth X” was a direct “backdoor pilot” for the series, and Russell Tovey’s titular character has been referenced in The Flash Seasons 4 and 6 and Legends of Tomorrow Season 3 and seen in Supergirl Season 5. Melissa Benoist, Carlos Valdes, Danielle Panabaker, and Iddo Goldberg also appeared in vocal guest roles as either the Earth X counterparts of their respective characters or the Earth-1 versions of their respective characters, and Earth X versions of Leo Snart and Laurel Lance appeared in Season 4 of The Flash and Season 3 of Legends of Tomorrow following the events of Crisis on Earth X.

Those two articles confirm that the Constantine who was about to appear on Arrow and went to Legends is the same one from the NBC show, not that that show is deemed necessary watching. Just because it’s the same version doesn’t mean that his show became a core Arrowverse series. I had seen it by that point, but there’s plenty of context given on Legends to fill in anyone who hadn’t.

I’m not denying that there aren’t plenty of connections between CBS Flash and CW Flash - that was obvious from the beginning. But again, you can go into the CW show w/out knowing those connections and still not miss a beat because the show specifically establishes these Earth-1 versions of those Earth-90 characters. Also, Shipp only appeared as Earth-90 Barry during the Elseworlds and Crisis on Infinite Earths crossovers, which both happened well after Flash season 2. Are you getting that confused w/ his appearances as Jay Garrick?

Mari made 1 live-action appearance in Arrow, which you could follow w/out having seen the animated series, and only appeared on Legends through archival footage/pictures, despite the producers wanting to bring her on in season 2. Her story and connection to Amaya was given plenty of context on both shows.

You also won’t miss anything in Crisis on Earth-X if you’ve never seen Freedom Fighters, which doesn’t make it necessary viewing. I’d even argue that its Arrowverse status is dubious considering Guggenheim admitted that there are several continuity errors. For example, Earth-1 Ray is shown to be fighting openly as a superhero on his earth w/ heroes like Cisco, Caitlin, Vixen and Curtis, but when the other Earth-1 heroes meet him on Earth-X in the crossover, they’ve never heard of him.

Ultimately, your arguments only support the fact that these shows are connected to the Arrowverse, which I obviously agree w/, but not that they’re necessary viewing the way the main 6 series are (soon to be 7 w/ Superman and Lois). At the end of the day, you can choose not to watch Constantine, CBS Flash, Vixen and Freedom Fighters, and still follow along perfectly when it comes to the Arrowverse. They’re recommended shows, not core ones.