What books are you looking forward to in 2020?

You can list books that are already confirmed, or titles that you fantasize about! I’m excited/hoping for (in no particular order):

Off the top of my head, all I can think of that’s new would be Daphne Byrne, Plunge, and Strange Adventures. I’m sure there will be a lot more new series that I’ll check out this summer when they are announced.

Tynion’s Batman run is definitely something I’m looking forward to, not to mention Three Jokers. Actually, I’m pretty sure I heard that Batman: Earth One vol.3 is coming out in 2020 as well, and I’m very excited to read that.

On another note, there’s a good chance that we’ll be getting a nice big crisis in 2020, so here’s hoping that works out well lmao.

Aside from Three Jokers (which I won’t be completely convinced is actually coming out this year until I see the solicit), I’d add the #750 issues for Wonder Woman and Flash

And Cyborg will be a founding membet of New Tern Titans gaining the Mother Box as in Justice Legue New 52 tweaking story from.origin to.another reformation of the League.

Superboy is in Young Justice

So I hope team will be

With occasional.appearancrs by
Super powered Hawk and Dove
Ravenger / Jericho

Jason Todd has own book snd is unavailable like Superboy Conner

Really looking forward to the next six issues of Lois Lane, the remainder of The Question: The Deaths of Vic Sage, February’s “Crimes of Passion” anthology, and Green Lantern: Earth One, Vol. 2.

rubs hands together in thought

-The 750th issues of Wonder Woman and The Flash
-the new creative teams on Batman and Justice League
-Green Lantern: Earth One v2
-The Green Lantern season two
-the continuation of the 100 Page Giant line

5G, the rumored Crisis, Three Jokers and the like are all of great, great interest to me, but I’ll wait for confirmed, official details to be released by DC before I put them on any kind of anticipated upcoming projects list.

Batman white knight vol.3 (I heard it’s being created now so I assume it will be out th is year.

Of course three jokers is on the list, assuming it’s coming out this year.

I’m interested in seeing Robert Venditti’s run on Justice League since I’ve heard a lot of good things about his previous Work.

I’m very interested in seeing the rest of some miniseries the Batmans grave and Neal Adams Batman vs Dad So Ghul. Jokers killer smile, the question, Hell arisen and any Tales from the dark multiverse books. I believe there is supposed to be one more left in the series.

It looks like dc is going to be the year of Bendis because he’s going to be responsible for 20% of all the comics that come out starting March and he’s head of some new event coming up.

Can’t wait for Dad So Ghul

I am personally super hyped for three jokers I rarely get comics as soon as they come out but I am definetly picking this one up as soon as I can.

I’m just looking forward to Dick getting his memory back so I can finally read Nightwing comics again.

A new Titans Comic won’t happen unless it’s with 5G. They have too much going on right now to take time on a series which critically bombed the last time they tried it.

That is every character!

The original Rebirth.Titans started strong but later on.they had no purpose.

Starfire and Cyborg are being written out of f Justice League Odyssey replaced by a much stronger cast.

The six riginal.New Teen.Titans members as a team with.Wally. or not, will sell in my opinion

I enjoyed the latest Titans for what it was! Miss Martian was one of the highlights for me, though I do agree Beast Boy never regaining control of his powers was frustrating. Something to tackle in a future series!

Yes! I loved the first season, and am very excited for S2.

how about more, more shazam family, Superman family and cut down Batman little bit in 2020 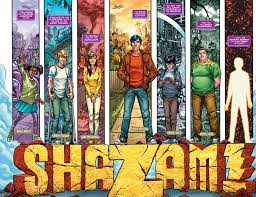 I’m looking forward to anything Robert Venditti writes (Justice League and Hawkman), more Pete Tomasi (hopefully he stays on Detective Comics),and Bendis writing more “kids” comics so he has to give up the Superman titles.