What are your favorite comic book references?

Being a huge comic book nerd, I notice a lot of comic book references in comic book movies and shows. Sometimes characters name drop various characters from the comics like in Death of Superman when they name drop Lori Lemaris and drop the conversation with the reasoning of Clark’s mom serving halibut since in the comics, Lori Lemaris is a mermaid. While I do love name drops since I often get to excitedly say, “Hey, that’s insert name here!” but the best ones are subtle nods to the comics.
My personal favorite comic book reference comes in Constantine, most noticeably for me in the last episode when I noticed that John refers to Jim Corrigan, a police officer who is the Spectre in the comics, as “Jimbo” which is a nice reference to the Joker who refers to Jim Gordon by the same name.
What are your favorite comic book references in any form of media? I think it’ll be interesting.

I enjoy the Robot Chicken DC Comics Specials. And Freakazoid’s references to Pop Culture and the Comic medium. 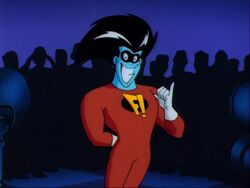 Teen Titans Go has no business with some of the easter eggs. I did appreciate that in a batcave episode, there is an urn labelled “Robin II”

And the Tick (Animated Series).