What Are You Hoping For In Batman The Long Halloween Part Two,

Well, it’s coming out next month so I am wondering what everyone is hoping for, as the editors can’t really say this affects ongoing stories in the comics so we could get more out of it as we are not beholden. I say they do an experiment in can batman be happy and be batman. see how it turns out.

See this is what I don’t like, When the movies affect the comics.
The comics can affect the movies but not the other way around.
I don’t want a whole romance story, I just want the mystery stories and action.
Character development is good, but I don’t like the cat woman/batman thing, and I don’t like changes like this. So I just want there to be something catastrophic to happen to Selina. I need the comics to stay dark, Bruce isn’t allowed to be happy.

Are you aware the comic book the long Halloween had a romance angle between Batman and Catwoman in it. If you missed that angle, I suggest you read it again as Bruce and Selina are dating in the comic and don’t break up the first time until dark victory. With Batman, rogues gallery, his comics are going to stay dark no matter. The biggest change so far in the film is that Selina Knows Bruce is Batman. This was influenced by batman vol 3 # 50, where Holly Robertson reveals Selina Kyle always knew Bruce Wayne is Batman. also the romance between Batman and Catwoman literally goes back to her first appearance in Batman vol 1 # 1 back in March 1940, when Batman lets Catwoman escape after he and Robin capture her.

But to say Bruce is not allowed to be happy is literally an insult to the greatest of DC’s hero’s Batman is the hero that gets attacked psychologically every 5-10 issues, physically Injured almost constantly, emotionally tortured every 30 or so issues. He has found his sons hung from the roof of the Batcave, has held the dead body of two of his sons, had to watch a woman he considered a daughter (and really should be his freakin daughter by now) paralyzed from the waist down, and has found the corpse of the man he considered his father, and had to rebury the man twice. Had his heart ripped out by the only woman he could and has ever loved because she decided to be selfless and leave him at the alter because of that very reasoning you just gave and had to see that woman with her heart literally ripped out, had to fight his friends and watch his best friend be beaten to death by (the greatest) monster (ever to live), had his back broken three times, been in at least three coma’s, had to fail a boy he considered a son (and later adopted him), Had his memory erased by his friends and saved the universe at least 6 times and the multiverse at least 2 times. And has literally had everything bad to happen to the rest of the DC heroes happen to him. Yet still refuse to kill.

Ya, Batman has earned a bit of happiness.

Want to read something catastrophic that happen to Selina? Go read DC Super-Stars #17, specifically the secret origin of the Huntress.

Batman has earned a bit of happiness.

But Batman is happy being Batman

only woman he could and has ever loved

You know he’s loved other women before like Silver St. Cloud?

Tom King’s run really ruined the Batman/Catwoman relationship for me.

sorry to hear that, almost did for me till i read batman 78.

Tom King is the worst writer to touch Batman in years.

and the reason for this observation is? I frankly enjoyed kings run and am continuing to enjoy it in the pages of Batman/Catwoman.

For me to smile at least once.

A great thing to ask for however you already did after Selina stole your watch.

Do you have the time?

nope… but I can get it pretty easy 10:7:53ish, however, that’s mostly when he is talking there is a genuine you can say you are really smiling as you talk to Alfred 6:36 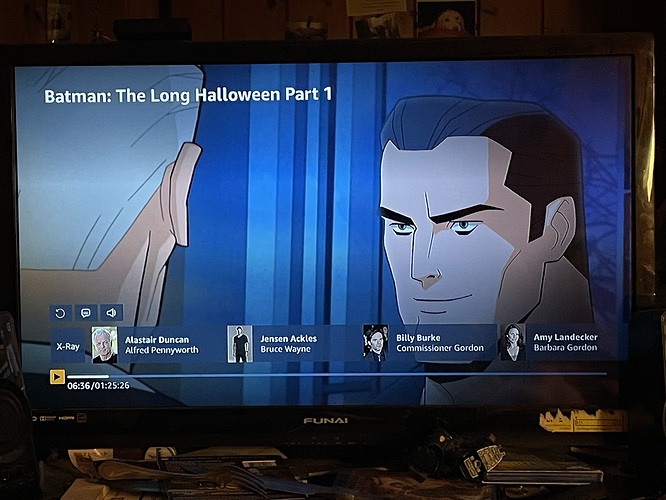 Honestly I’m hoping they don’t do anything too crazy and just stick to the story as much as possible like they did with the first part. Like the extra parts really added to it without changing anything. That’s all just be at least on par with that and together it’ll be the best Batman movie and best comic book adaption to date.

I’m sorry I can’t tell if you’re saying that was an actual end credit or that you would like to see it. If it happened Im about to FREAK cuz I missed it. I saw the ivy scene but there was another?! If you just wanna see an end credit scene where Bruce and Selina get tickets to the circus then I do too cuz that means Dick Grayson Robin is next yea the best one!

I would like to see this as the end credit seen in Part two. I Hate that Batcat is always broken up when other heroes get lasting relationships and this extends to the entire batman family. also, Selina did not know Bruce is Batman in the original Long Halloween so that was a game changer as it’s relatively new in canon dating to Tom King run. In the new earth canon, she does not know till Hush in 2003. However, it does seem like Earth-two Selina may have known too (read brave and the bold 197 to find out how they get together

I just need them to introduce Dick as Robin so they can disagree, fight, he quits and forms the Titans and becomes Nightwing cuz I NEED a Nightwing SOLO animated movie - no batfam!

Part 1 was pretty cool. I wish there was more distinction between the holidays like a title card versus just characters announcing what day it is. They seemed to be hinting Catwoman When In Rome so hopefully flesh that out more. However, with the passing of Naya Rivera, I’m not sure what they’d do in the future.

I also would not mind if Dent has a split personality and was Holiday. Gilda randomly taking over and doing some of the killings never made sense to me in the book.

I want a solo movie starring, Helena Wayne, As eather Huntress or Batwoman =).

I also would not mind if Dent has a split personality and was Holiday. Gilda randomly taking over and doing some of the killings never made sense to me in the book.

Gilda did not take over She was originally Holiday, then Harvey took over before Alberto took the credit. PS: BatCat is faster to type and I ship the paring hard.