I’m so behind, I’m just now getting around to Totality. Apart from that I’ve been reading Doomsday Clock and DCeased.

My next read will probably be…The Totality, cause I want to participate with the Book Club actively.

Just finished the finale of Terrifics.
Such a fun series with a great team. The ending felt a bit rushed but liked how it left it open. Did get big with the council added to the core team but hopefully if they return the council is more of a background or occasional team up. They weren’t bad characters just felt really crowded and took from the team development the main four did.
Overall great run and hope more terrifics in the future.

However the art in Issue 8 (the CGI one) is an eyesore. This looks worse than a PS1 game’s cinematics…in 2011? Who okayed THIS?

I’m reading TPB’s at this time and not currently a DC title. Next on my list though is finishing the Batman and the Outsiders series (2019) and then The Question: The Deaths of Vic Sage.

Okay, wanted to wait until I finished reading Batman Incorporated to post my thoughts but wow. My impression, to quote Ben “Yahtzee” Croshaw, is “It’s like having a big tasty meal at a nice restaurant, but when you ask for the check, the chef comes over and farts in your face.”

Issue #9’s art may as well be Cameron Stewart preepmtively dumping napalm on the fire of the allegations that would haunt him years later (in addition to being a crappy final story for Steph involving a boarding High School for EVIL, that’s like Saturday morning cartoon stuff).

Leviathan Strikes was just kind of a lackluster conclusion. Criminal Mastermind…doesn’t trap Batman in an inventive deathtrap or anything like that. His plan? Stab him.

Plus, the whole series has an uncomfortable amount of gore. I’m pretty sure in every Grant Morrison Batman arc I’ve read (Batman Inc, Gothic, Arkham Asylum) there’s at least one decapitation. What’s with that?

On a lighter note I’m disappointed that Knight and Squire don’t appear despite I swear Squire’s appearance in Batgirl saying it was from the pages of Batman Incorporated.

I’ve been re-reading Oliver Queen’s last arc in Green Arrow (1988), but today I discovered the final issue (101) is not available on DC Universe Infinite. So the story on here ends with this: 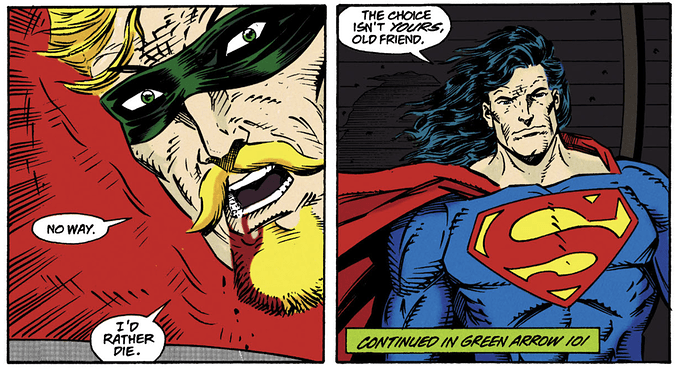 (I really thought 100 was the last issue in the story)

Green Arrow #101 can be found in Green Arrow: 80 Years of the Emerald Archer The Deluxe Edition, freely available on hoopla: https://www.hoopladigital.com/title/14050803

Alright so I just started reading the Flash rebirth series. It’s alright so far. I was never that big of a fan of the Flash, but the art is nice and I’ve def grown warmer to him as a character.

Going back to Ex Machina!

Thanks for the info! Hoopla is my go-to source for stuff that’s not available on DCU Infinite, but I didn’t even think to check there because I wasn’t aware the issue was in any collections.

In case you haven’t seen it yet, may I humbly recommend my Digitized Comics Unavailable (or in Alternate Locations) on DC Universe Infinite: A Directory thread? I’ve created a comprehensive guide to where all of the digitized comics that aren’t available on DCUI can be found.

Finished JLO
Really enjoyed this story. Such a great team with twist turns space gods monsters time travel and more. Such a sweet ending. Man I really liked this team.

Also Batman and the Outsiders 2019.

Pretty nice read with cool moments. Like the focus in Black Lightning in it. Overall a nice read but a little fast.

I started reading Superman Red & Blue (I only really bought it for the Amano cover). Honestly, the first two stories were such downers I slipped it back into the plastic and don’t want to bother again.

I also just read Paul Dini’s Dark Night: A True Batman Story for the second time. Both times I’ve read through it in a single sitting. Brilliant work and something I’d recommend both to creatives and those dealing with trauma.

I’m reading a few things. The first is Gail Simone’s Secret Six. So far it has been a pretty great series. Most of the characters were unknown to me before starting this. I especially like how the villains are very evil. There is no question about it, or some narrative about how they are just misunderstood. Nope, they’re evil.
I am making my way through the original Hellblazer. I love the atmosphere of this comic. It reminds me so much of the Sandman comics I read years ago.
Finally, I am starting to make my way through Swamp Thing. I’m still on the first issue of where Alan Moore took over, so I don’t have much of an opinion yet.

Just Finished reading the #1 of Batman:ZeroPoint , waiting for the #2

For the past couple of months Wally, Kyle, Connor and Dick from the great legacy comics of the '90’s. Compelling, thoughtful comics that built upon the past instead of trying to tear it down. Books that eschewed nihilism and celebrated hope.

Got the first issue of the new Robin book today. I like it so far! The Enter The Dragon-esque premise seems like a fun start.

Finished the Knight & Squire trade paperback last night. It was a lovely experience and I recommend it to anyone that likes comics. Jumping into New 52 Aquaman too.