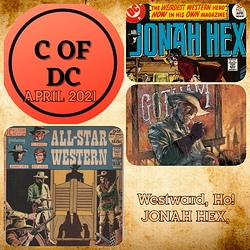 This month we are going to be taking a deep dive into a different part of the DCU then we normally do and a part of it that doesn’t get as much attention these days as the Superhero genre does.

The “Western” became a big deal in the 1950s and 1960s. The media of the day were full of stories set in the Old West and comics were no different in that respect. Various comics companies in existence at the time had at least one Western themed comic and some even had more.

The popularity and sales of superhero related comics were in a decline at the time so DC rebranded All Star Comics, which had been the home of the superhero team the Justice Society of America, to a Western themed anthology called All Star Western. It began publishing with issue #58 (having taken over it’s predecessors numbering) in May of 1951.

Our feature character for this month became a regular in the second volume of ASW (later retitled Weird Western Tales) as well as its third volume. He was also the star of his own solo series. And more recently we have learned he has a great, great grand daughter named Ginny.

C of DC is proud to present: Jonah Hex

As with previous months I will be posting interesting tidbits of information both on Jonah Hex and on the Western genre of comics as well as weekly discussion questions covering the issues we will be reading. Questions related to each week’s readings will be posted on Sundays starting on Sunday April 4th.

Feel free to jump into the discussions.

To join CHARACTERS OF DC simply hit the link.

Next month we will be taking a dimensional journey to visit some characters from a different Earth so stay tuned for as C of DC visits the flip side of the DCU in Roles Reversed. See you all then.

That we most definitely do. When I first started looking into this session I was hoping that I could do some classic Western comics and some early Jonah Hex stories as well. But

Oh, thank you so much for this. I knew of Jonah Hex but haven’t read anything other than the New 52 run and never got around to backtracking through his history. Perfect opportunity!

Welcome to the club @keath!

Wondered if the Justice League main cast; Flash, Batman, Superman, Wonder Woman, Aquaman, and Green Lantern (Allen Scott & Jay Garrick) ever did any Western stuff? I could totally see the Wayne family involved in railroads and the Luthor’s involved in the Plantations.

Welcome to the club @Stephen.Gluck.Henderson.67303.

There was an episode of Justice League Unlimited called “The Once and Future Thing, Part One: Weird Western Tales” where they did so. 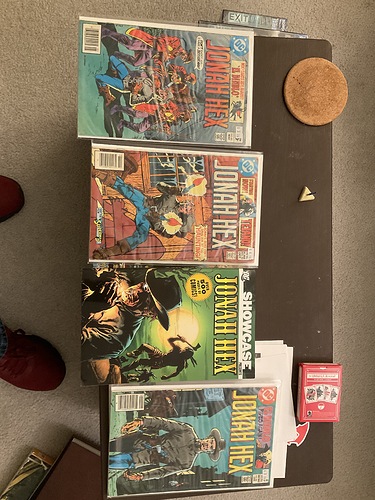 Just reread the 70 issue Jonah Hex run on here and starting All Star Western. History Club will do the Western genre sometime later this year, but will definitely link back here for discussion on these stories. More later on my thoughts but running out of steam tonight, cheers.

Also, keep on eye out for primates — Message Sponsored by DC History Club.

Are those in your collection @msgtv? If so that’s really cool. I was recently lucky enough to get to read Jonah Hex’s first appearance in All Star Western #10 that a friend of mine had in his collection. (That was an adventure and a half let me tell you that included social distancing and masking not just because of Covid but because I am allergic to the paper.)

Actually just bought those a few weeks ago, haven’t even read them yet. I like the Showcase too, but you miss the back up stories. I’ll read the comics this weekend

Those are really cool. Thanks for the picture!

So, Hex a top 10 all time character for me. Loved reading his Westerns as a kid, and I’ve always thought he traveled well as a character into different genre. I even enjoyed his future dystopia series. I’m not sure I’ve ever read the Secret Origins story before. Now, his pa abusing him and ma I’ve seen before and in the modern books much more compellingly. But, the interesting thing about this version is the story that frames that origin. His Cheyenne wife and his corpse made for a good story. Plus, I now know if I had been lucky enough to be raised by condors near a glowing rock I’d be able to fly too.

Hex a top 10 all time character for me.

Definitely with you there @msgtv. He is one of my favorites as well.

Loved reading his Westerns as a kid, and I’ve always thought he traveled well as a character into different genre.

It was my dad who first introduced me to Westerns through movies and old radio shows. It was something special we did as bonding time. I, in turn, later introduced him to Western themed comics, which he enjoyed. Jonah Hex was his favorite character.

I also agree with you that he can travel through various genres and still fit within any of them. I’ve never read the Hex series you mentioned but I plan to at some point even though there are fans that dislike it.

Now, his pa abusing him and ma I’ve seen before and in the modern books much more compellingly. But, the interesting thing about this version is the story that frames that origin. His Cheyenne wife and his corpse made for a good story.

I did find the story surrounding Jonah’s origin (of a sort anyway) the more interesting of the two in Secret Origins.

Plus, I now know if I had been lucky enough to be raised by condors near a glowing rock I’d be able to fly too.

I wish I could find a glowing rock that would give me the power to fly. Would be very useful.

And here are this week’s questions.

What did you all think of Tall Bird’s story of Jonah’s life?

What about his brief appearance in Booster Gold #3?

I sure enjoyed rereading these issues. It had been years since I had but I enjoyed em as much as I had originally, which was nice.

These are a good representation of standard Hex stories. He shows up in town, takes a bounty, things go sideways for somebody, Hex gets captured/tortured/almost killed, and in the end lots of people get shot. But I enjoy these a lot. This is also the most consistent art you’ll find in this series. As for what type of character. Hex is an anti-hero. The definition of which is “in the age of the antihero, baddies and goodies became less distinguishable from one another.” Clearly based on Eastwood’s spaghetti western characters, Hex has a code, but it’s not the same code a ‘civilized’ person would have, but in the end he’s on the side of good, even if he does bad.
Love Bat Lash, the womanizing, gambling, gunslinger. Rather be Bat the Jonah.
Tangent: The DCUI blurb describes Bat Lash as a pacifist. This is about the third incorrect use of pacifist I’ve seen in a week. Bat punches, kicks and shots people. By definition, he’s not a pacifist. Now, he’d rather make love than war, but who wouldn’t.

This is also the most consistent art you’ll find in this series.

I really enjoyed the art here quite a bit. It really does set the tone for the stories being told here.

Hex is an anti-hero

And I expect we all know how much I love anti-heroes. I do wonder how Hex and Jason would get along if they were to ever have a team up? I think I’d like to see that.

Clearly based on Eastwood’s spaghetti western characters, Hex has a code, but it’s not the same code a ‘civilized’ person would have, but in the end he’s on the side of good, even if he does bad.

I think all anti-heroes have a code they follow it’s just not one that heroes can completely back or that some heroes can even understand. All in all I think it’s a might harder for an anti-heroes because while they are doing good, as you say, they are looked at as bad.

Reminds me of many a character in those Westerns I’d watch with my dad. And you’re right. Bat Lash ain’t no pacifist but he is defiantly more about making love not war.

Here’s week three’s questions and a couple of links about Western themed comics for those that are interested. 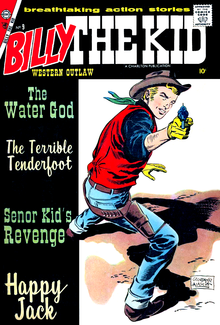 Western comics is a comics genre usually depicting the American Old West frontier (usually anywhere west of the Mississippi River) and typically set during the late nineteenth century. The term is generally associated with an American comic books genre published from the late 1940s through the 1950s (though the genre had continuing popularity in Europe, and persists in limited form in American comics today). Western comics of the period typically featured dramatic scripts about cowboys, gunfighte... 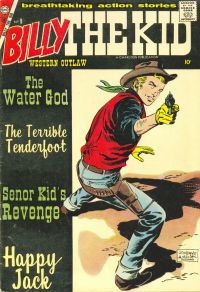 Western comics is a comics genre usually depicting the American Old West frontier (usually anywhere west of the Mississippi River) and typically set during the late nineteenth century. The term is generally associated with an American comic books...

Western comics is a comics genre usually depicting the American Old West frontier (usually anywhere west of the Mississippi River) and typically set during the late nineteenth century. The term is …

So, now into the updated All-Star Western. As time goes on the words “All-Star Western” get smaller while “Jonah Hex” gets bigger. I really really liked the start of this series. Putting Jonah in Gotham is a nice scenario to see him do his Hex thing. Arkham is a perfect straight man/partner. He can see things Hex can’t, but in other areas he’s a complete mess. I also like that as the series goes on we see other western characters for extended stays, including my favorite Tallullah Black. Unlike most Hex stories, we get multi-issue arcs which is a nice change of pace.
The back up stories are more hit and miss for me. Barbary Ghost, Night Hawk and Cinnamon, El Diablo are the high point. I’m up to issue 16 now, and it’s running out of steam for me a little now. They probably should have mixed some single issue stories in.

And now for a bit of fun.

What did you think of the Jonah Hex/ Yosemite Sam Special and what was your favorite panel?