We need to talk about the upcoming Birds Of Prey

It seems dc is going down the same road as fox did with Wolverine and later with mystique. take a popular character and then twist the stories to fit them. I doubt they’ll do anything interesting with the R rating like have Harley truly let her bad guy flag wave.

P.S. Does anyone else think Rosie Perez is about the weirdest choice for Rene Montoya?

Sounds like DCs holding off on Bat Gamily characters in the hopes of creating a new cinematic sub-universe centered around Robert Pattinson’s Batman movie. The Nightwing movie and Batgirl movie that was announced years ago have reportedly been pushed back to serve as spin-offs to Matt Reeve’s new Batman trilogy. Why? Beacuse Batman is DC’s biggest money maker and their best fallback plan. If they ever need to get back in the black, they’ll just make more Batman stuff.

El Barto, did the rant bug bite you again?? Lmao

You writing a dissertation or something?

I agree with you though!

Birds of Prey will be good

It bothers me that Barbara is not in it and the fact that it seems like the movie is going to be all about Harley. But I’m still looking forward to it and hope it’s good. I also hope it’s not connected to the DCEU because I don’t like the casting of literally every character even Harley.

I think the Harley actor is amazing (she has to play an insane woman, I think she does fine) and it really bothers me that Babs isn’t in it as well

Not to be dramatic (lol), but I think it’s disrespectful that Babs isn’t mentioned in the movie. She founded Birds of Prey for goodness sake!

It looks like a good movie. I’m still going to watch it to support DC, but it doesn’t feel like a Birds of Prey movie.

It’s going to be as bad as Suicide squad.

I made a Youtube video about my thoughts on this, my channel name is the same as my username here. But I did touch base on it here. The Birds Of Prey movie is really burning a hole in the back of my head atm.

Here’s what I wrote on another thread:

I have a very unpopular opinion about how this movie is being served up.

I really don’t want to get DeadShot sent after me on this one but oh well here we goooo (Slick Rick).

1. The fact there will be a movie in which Black Canary will be taking to a backseat to a character like Harley Quinn is - as a fan - the same as Superman taking a backseat to Mister Mxyzptlk…

You can’t have two “main actors/actresses” in a movie so there’s that.
2. Some of the birds being pulled into this movie is disheartening considering there is a strong chance there will not be a reboot/reiteration going in the direction of the team’s real origin and that would have been 150 times more entertaining to see than what we are getting served up. On top of that, imagine it being done over several movies. The first being of course with Barbara teaming up with Dinah and then later Huntress joining in and maybe in a second movie Starling/Ladyhawk etc joining in for example.

3. At the least from the impression the media revolving around the movie is giving of Black Canary I am not liking it. She’s way too strong of a character (in comics) than what Smollet seems to be acting out on screen - but that also can be due to the writer, Christina Hudson.

And she also lacks the intimidation factor Dinah has in the comics as drawn by many pencilers in DC Comics. Like, Black Canary (comics)

4. Renee Montoya, I like Rosie from the later 80s and early 90s but she’s way to comical and quirky for playing a serious character like Renee.
5. Cassandra Cain, so much to say here but we’ll have to see what happens in the actual movie. But so far, no good. That is ofc regarding what we know of her from the panels.
6. I’ll stop here because I don’t want to get sniped from 1,000 meters by Deadshot.

As someone who works in CG and in the digital industry, I love the art. I am a very coloful person, I live in Miami so a lot attributes to that. So yes, aesthetically the movie is super artsy and I love it for that so far. Black Mask being in the movie is also a plus for me. As an inline skater, I am also digging the rollerblades I saw Harley on.

In closing, the movie looks fun. I just think of what could have been. 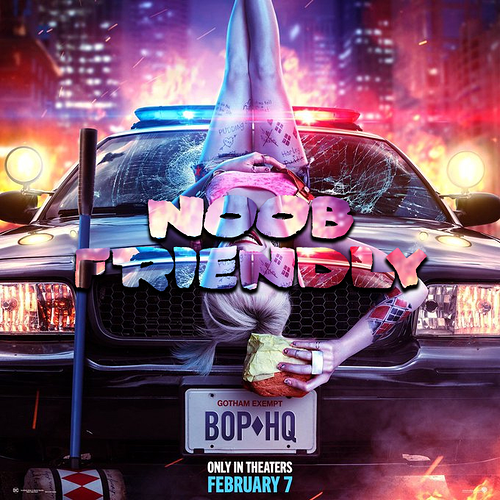 You are absolutely right

Maybe after the Batgirl movie there will be a BOP 2 and Babs will have to bring the group back together again in a more solidified way.

After watching the trailer I’m extremely hyped for this. Margot Robbie fully embraces the Harley Quinn role and does a fantastic job at bringing her to life on the big screen.

I made a thread on this but I think it got wiped back in the 1.0 community apocalypse.

This thread is telling everything wrong with this movie.

So, if you aren’t a Birds of Prey fan then you won’t see the problem. If you are… you will. If you aren’t familiar with them go check ‘em out. They’re awesome.

Let’s start our list of everything they are doing wrong.
• no Barbara Gordon. ahem dramatic music please. Ok now, where was I? Right, NO Barbara Gordon.
•Cassandra Cain is talkative, not a total boss, and just not good enough for me.
•Harley Quinn? They should’ve just gone with a Gotham City Sirens movie instead
•An R rating? I don’t know how joker went, and I don’t know how this will either.

Do you agree? Am I the only one who isn’t excited for this?

So now I would like to talk about the birds of prey roster It consists of Renee Montoya Harleen Quinzell aka Harley Quinn Cassandra Cain aka Batgirl and orphan Helena Bertinelli aka huntress Does it bother anyone that Babs is not involved at all? On top of that, is an R rating going to get this movie very far? Logan and Deadpool were a success… but so is the MCU, DC hasn’t had the best history in movie making. So what do you think?

I agree on many of your points but I’m excited to see many of these characters. I think a bop sequel could really help solve some of these issues. Make a Batgirl solo film then bring her into the sequel to officially bring the birds together.

Also, since no one has seen the movie yet, it’s difficult to completely write it off. You never know, you might enjoy it…you also might not enjoy it, but I think it would be a huge mistake to dismiss it.

How do we know that Barbara isnt in it?

The trailer has been released, and I believe they announced it. One reason I think she isn’t in it is because of the possible batgirl movie TBD.

@MissInkBlot thanks, I must not have looked good enough for this. Thought it got wiped.