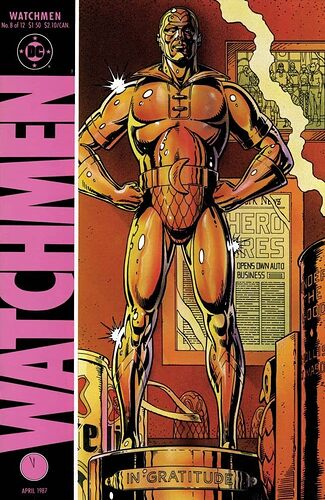 Onto the good stuff!

That’s the entry in our Watchmen 35th Anniversary journal for this week. We’re up to #8, so you should read that one. 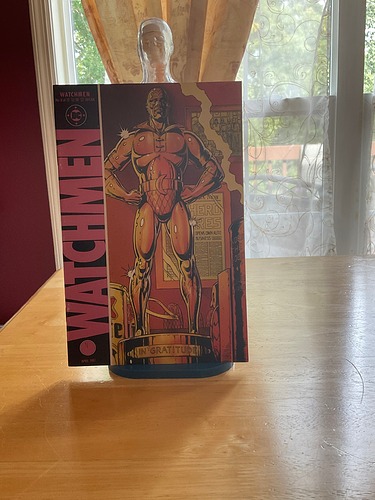 Is that table oak?

Kids, 'member: Comic books add character to furniture, so when mom rolls in, sees you’ve a pile of The Goods on the family couch and says “That trash on my couch?!”, tell mom to get bent, okay? Okay.

I kid, I kid. My mom always liked my interest in comics, as she was into Silver Surfer, Teen Titans and other stuff when she was in her teens. Not heavily, just here and there, but interest is interest.

Moore has cranked up the action, and set it against a number of other storylines and themes, everything from Halloween to street riots to flashes back in time. Does the narrative work for you in this issue? Too much going on, or is Moore keeping all of these balls successfully in the air?

I would say yes, but I’m a master of keeping track of multiple convoluted and intersecting storylines. I’m also extremely humble.

Well, it’s a very complicated issue, and no, I’m not just stalling until the bell rings, and I totally understood the nature of the question, and - Come on, ring, bell, ring…

We get Rorschach in prison and in the original version he’s very calm. How do Rorschach’s actions in this issue strike you? His he menacing, nuts, has he planned all of this out in his head?

Well, all three, really. “planned all of this out in his head” is probably a bit of an oversimplification, but I think he took care to notice everything and prepare for every eventuality. To paraphrase Clara Oswald, “The first step of every escape plan is to assume you’re gonna win.”

The Black Freighter story is fully integrated into the wider story now, what is reaction to this?

Er… How so? Because we get a glimpse into what Shea’s up to? Because at that very same newsstand, those criminals decided to go after Hollis?

What else ya got for us?

Well, in regards to what Veidt said about his plot with the Squid: "I went into the depths of humanity’s fears, searching for something beyond horror… ", it makes me think it should’ve been called “Project Blue Harvest”. Blue Harvest was the working title for Return of the Jedi: The director would always have people ask him about the rumors he’s doing the next Star Wars, and he’d say he was working on “Blue Harvest! It’s about horror beyond imagination!”