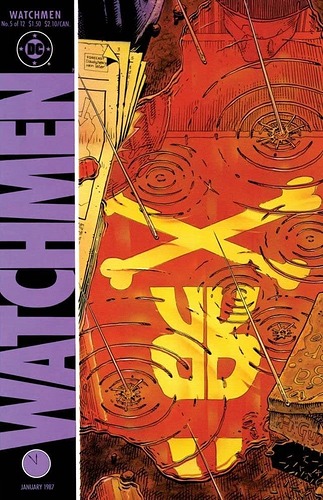 That’s Rorschach’s journal entry for this week. Put on your best fedora and belt out “My face! Give it back!” at an apropos moment as you enjoy Watchmen #5, good reader.

All references to future issues (including Doomsday Clock) will be blurred.

Between raw eggs and cold beans, just what is the deal with Rorschach’s dietary choices? Cook something for a change, Walter!

The comic within the comic adventure of Tales of the Black Freighter continues in this issue. Do you feel it mirrors any particular events in the issue, or the series as it exists up to this point?

Well, obviously Veidt had a tip on raw shark, so there’s that. I know the mariner’s tale is meant to mirror that of Veidt, and clearly the scene where “The shark’s stained marble eye looked up at me… And, in that instant, we knew each other.” mirrors Veidt’s own murder of his would-be murderer.

“Everything evens out, eventually. Everything balances.” Does it though, especially for what happened to Rorschach in this issue and what may (no spoilers for the new fish in the audience) happen in #6?

Well, that is the question, isn’t it? Ultimately, I believe Rorschach’s death is fitting for his life: Completely rudderless in an unbearably cruel universe, trying to do something that is, at its essence, good, but without any regard for external factors. And, well, in the end, Veidt got his just desserts, didn’t he? After only killing somewhere presumably far upwards of three million people. And who knows what Nostalgia will do… Nothing ever ends, and I guess that’s the answer. No, it doesn’t even out in the end, because there’s no such thing as the end.

Anything else that comes to mind.

Issue 5 is mind blowing. The chapter is titled Fearful Symmetry and you may notice the book is symmetrical in many ways.
The center of issue 5 is the attack on Veidt. I suggest you start there. It’s easy to see how one side mirrors the other. In my paperback edition the pages are numbered so I’ll reference these; the center is 14 & 15.
Pages 13 & 16 mirror each other. In content – Veidt. In panel layout. In color choices.
Pages 12 & 16 mirror each other. In content – the newsstand characters and Tales of the Black Freighter. In panel layout and color.
Page 10 is symmetrical with page 19. The panel layouts are the same. The content is Dan and Laurie. Notice how frequently mirrors are used in these panels and pages! Half of the narrative is a reflection in a mirror!
When you see the detectives towards the beginning of the issue, they’re reflected towards the end of the issue (pages 7 & 22).
And of course the bookends are Rorschach at Moloch’s (content). 9 panel page layouts 1 & 28. Even the colors per panel on 1 & 28 are mirror images!
I’ve never seen storytelling like this or design like this in any other comic book. It’s mind blowing!

Issue 5 is mind blowing. The chapter is titled Fearful Symmetry and you may notice the book is symmetrical in many ways.

This is why #5 is one of my favorite issues.

At first glance, it seems like a simple continuation of the story, but upon a re-read, the symmetries begin to become more visible and it all leads to the story being taken to another level, not only for what happens in the story, but in terms of Moore and Gibbons’ construction of it as well. 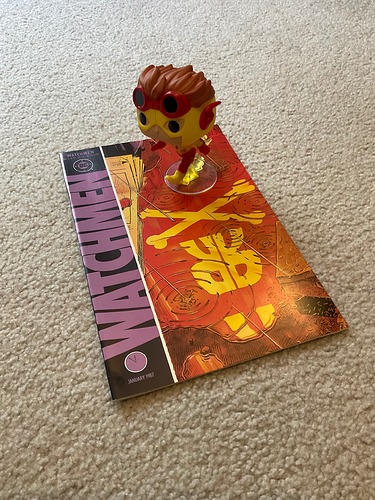 Hey KF, there’s no treading on classic literature in these parts!

You’re welcome to run roughshod over Heroes in Crisis, though…

He’s got no respect for the classics

Kids from the future today!

What with their Walkmans, Farrah Fawcett posters, wide-leg jeans and vans with Frazetta art on them! Pah!

Actually, FF posters and Frazetta art vans are badass, but the rest? Pah!