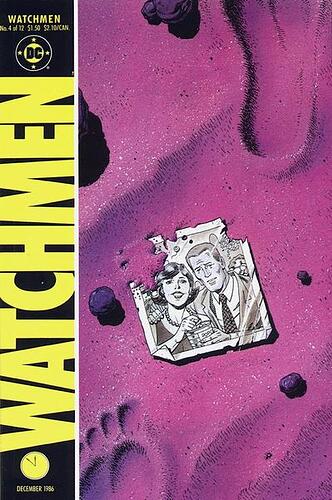 That’s the journal entry for the 35th anniversary this week. If you’re still reading this journal with any expect other than your own demise, have you been paying attention? 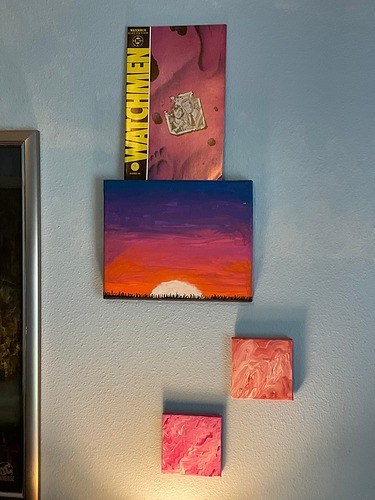 Let me just say, I love this non-linear storytelling. I would love a series where Jon watches different characters’ origin stories in this way. “It’s 1983. Krypton’s last hope blasts off in a hastily assembled rocket ship. It’s 2001. Jonathan Kent shows his son the vessel that brought him to Earth. It’s 1938. The Daily Planet runs the headline “CAPED WONDER STUNS CITY”. It’s 2016. It’s 1938. It’s 5,000,002,021 CE… The photograph lies in the sand at my feet.”

Watchmen #4 centers on the story of the big blue bald guy himself, Doctor Manhattan formerly known as Jon Osterman and his journey from real live boy to naked emo man on Mars.
*Dr. Manhattan seemingly has one blue foot in the human world and another detached from day to day concerns. Is he just going through the motions, or does he actually care about people.

This is an extremely loaded question, and as a STEM type of guy, I see this as more a question of quantum physics than of psychology. Jon claimed to be “just a puppet who can see the strings”, and this raises the question of the causal nature of the Universe, and the Bootstrap Paradox. Is the Universe just a clock without a craftsman? Or does the arc of the moral Universe bend toward justice? Of course, quantum physics contains the exact same number of particles as psychology. Structurally, there’s no discernible difference. They are unquantafiable abstracts.

Dr. Manhattan dumps her first love for Laurie and is accused of just wanting a younger woman. Guilty or something less abhorant?

The latter: Just going through the motions. Jon isn’t responsible for any of his actions between 1959 and 1985.

Blasting his way across Southeast Asia, Dr. Manhattan destroys the Viet Cong after seeming to question the war. In addition, he thinks the VC worship him like an angry god. What’s up with that? Does Dr. Manhattan represent one of “America’s Best and Brightest” who through arrogance embroiled America in Vietnam?

None of my immediate family members are old enough to remember the war in Vietnam. I was only 60% sure that V.V.N. Day didn’t really happen in our reality. I’m no more qualified to comment on this than a five-year-old.

Me, ask a loaded question?

New thought! “Through my blue fingers, pink grains are falling, haphazard, random, a disorganized stream of silicone that seems pregnant with the possibility of every conceivable shape… But this is illusion. Things have their shape in time, not space alone. Some marble blocks have statues within them, embedded in their future.” This made me think of the Doctor Who episode “The Rings of Akhaten” (spoilers for the episode): Akhaten was a sentient world who needed to feed on memories and stories. The Doctor allowed him to read the last 1200ish years recorded in his mind: “I walked away from the Last Great Time War. I marked the passing of the Time Lords. I saw the birth of the Universe and I watched as time ran out, moment by moment until nothing remained - No time! No space, just me! I walked in universes where the laws of physics were defined by a madman! And I have watched universes freeze and creations burn! I have seen things you wouldn’t believe and I have lost things you will NEVER UNDERSTAND! And I know things! Secrets that must never be told, knowledge that must never be spoken! Knowledge… That will make parasite gods BLAZE!” But even this was not enough. Clara managed to save the day by feeding him a single leaf. It was the leaf that fell into her father’s face, causing him to almost get run over and be saved by Clara’s mother, which was how their family started; Her father always said it was the most important leaf in human history. Clara explained that the leaf contains everything that could have resulted from that, a vast amount more than everything that ever was. As the Doctor put it, “What was and what should have been are two very different things. There’s an awful lot of one, but there’s an infinity of the other!”

Okay, now I so badly want a crossover.

The Doctor works with everything