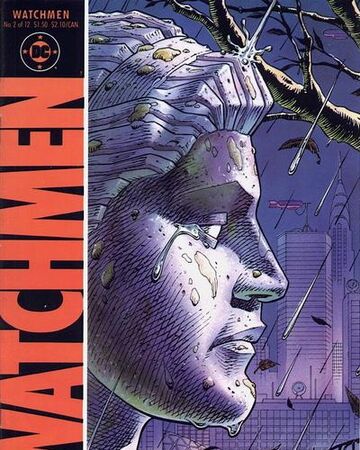 Rorschach’s Journal. 2021. The Read-along of Alan Moore and Dave Gibbons’ Watchmen continues. A Comedian is dead in the city and Issue #2 is a reaction to that murder.

To commemorate this anniversary for the Comic of Comics, the Justice League Book Club (run by myself) and the DC History Club (run by @msgtv and @TurokSonOfStone1950) will provide a fun analysis of each issue on a weekly basis, with my contributions coming from the odd-numbered issues, while DC History looks at the even-numbered issues. 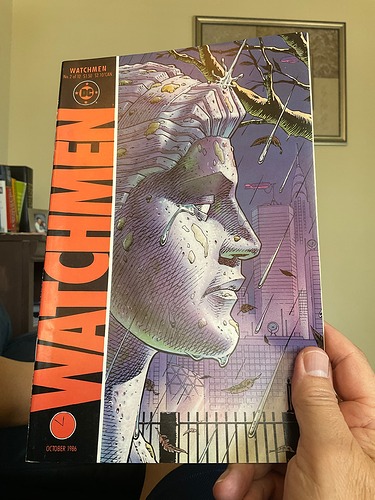 Of course, since the Comedian is dead, the emphasis of this issue is on flashbacks.

We never hear the thoughts of the Comedian himself, just the reactions of others.

While the funeral of the Comedian is going on, Dr. Manhattan teleports Laurie to see her mom, the original Silk Spectre who was active in the 1940s (it is now 1985)

Since I will be 71 on Saturday, I relate very much to her mom’s line

“Every day, the future looks a bit darker. But the past, even the grimy parts of it,
Well it keeps getting brighter all the time.”

We see a Minutemen meeting in the 1940s, and afterwards, a teenage Comedian assaults Silk Spectre 1.

Interesting that there are two instances where females cut his face in this issue.

Next it is the 1960s and Captain Metropolis tries to organize a new team, with the other members being the characters of this book.

Jon see Laurie for the first time. She may be only 16.

The Comedian says, why bother, in 30 years the world will be blown up in a nuclear holocaust. The group breaks up.

Then the point of view turns to Dr. Manhattan in Vietnam. We get the first inkling that all of time is fluid and ever present with him and that he believes the future can’t be changed.

Then Dan remembers the Police Riots

The Comedian in both situations enjoys his cruelty immensly

Rorschach sees the old villain Moloch at the funeral and attacks him at his home.

The plot advances as Moloch describes how the Comedian came to his home one night and describes an island where something is happening which deeply disturbed even him.

Then Rorschach visits the grave of the Comedian, whose tombstone says dies at age 61.

In his journal, he muses that the masked life ends violently with no friends.

And then ends the issue with a joke.

This issue is a character study of the Comedian, as seen by other people.

The only plot advance is that the Comedian has seen something he shouldn’t have. His talking about it, we will later learn, causes his death.

On Sally, right, but also the way she acts towards her daughter about it, clearly it messed her up.
Molloch also reminded there was a time when the peach pit medicine for cancer was a big controversy.

I think it definitely helps add to the mystery – knowing who the victim is and what they’re about can make one more compelled to find out what happened to them. It also says a lot about the people having the flashbacks – from Sally’s sense of nostalgia to Dan’s naivete, to Jon’s sense of disassociation and Ozy’s need to change the world.

It says that if he was the epitome of this world’s super-villains, the superheroes really weren’t much to write home about either. Going from what we see in the story as well as the Under the Hood excerpt, you get the impression that the superhero stuff was more of a fad than anything.

That’s a hard one – I mean, he’s not wrong, we can clearly see that Manhattan is losing his connection with humanity, but…do you really want to side with the guy who has a necklace of human ears and shoots a woman pregnant with his child for the hell of it? Yes, Jon could have stopped the bullet, but Blake could have grabbed the arm holding the broken bottle and punched her out.

I think the real question is is The Comedian also without the stuff that makes one human…or does he have too much?

One thing I’ll say that wasn’t mentioned much in the questions is that the story that Moloch tells about Blake at the end really does help add to the mystery surrounding this title. I mean, this is a man who has done so much inhumane, horrific stuff, it makes you wonder what it was that made him so afraid and horrified.

Reading this also made me wonder – what was it that got Edward Blake to become The Comedian? I mean, with all the stuff we’ve gotten since the start, he’s probably the character we know the least. We know he started in the Waterfronts, and I believe it’s said he was the youngest member of the Minutemen at 18 (which is funny because Gibbons still draws him in a way that makes him look like he’s in his 30s). But nothing else other than what we get here.

I know The Comedian had his own Before Watchmen mini and I think it was actually fairly decent, but now I’m wishing that they handled more of him as a child than as an adult.

Speaking of which, with all this Watchmen coverage, do you think we’ll do anything for the other Watchmen related books, like Before Watchmen or Doomsday Clock?

on the fact that we don’t know what originally drove the Comedian (or why the name) whatever the superficial reason, I think it was the opportunity to bust skulls. He’s the ‘hero’ you could have easily seen go villain at the start if things work out a little different

Which is funny, because while his actions are reprehensible, he’s also kind of a red herring for the real character who was arguably a villain from the start…

Right, which also makes me think of the Gunn Peacemaker, whatever the rationale, it’s about the skull busting