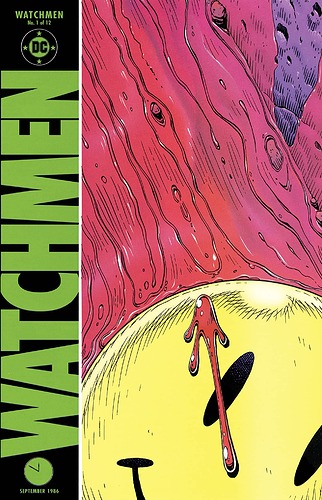 To commemorate this anniversary for the Comic of Comics, the Justice League Book Club (run by myself) and the DC History Club (run by @msgtv and @TurokSonOfStone1950) will provide a fun analysis of each issue on a weekly basis, with my contributions coming from the odd-numbered issues, while DC History looks at the even-numbered issues.

That’s all there is to it! Easy-peasy, lemon-squeezy.

So, toss on your fedora, pop open a fresh can of cold beans as you listen to some Bob Dylan, maybe buy a pair of jeans (or Tobias Funke-style never-nude shorts) for Dr. Manhattan along the way and let’s get this 35th anniversary celebration off on the right foot!

That’s the journal entry for this week, dear, good, reader. I hope that when we look up and say “Join our anniversary party to commemorate one of the all-time best stories in comicdom.”, that you’ll look down, say “Yes.” and join us

“all along the watchtower.”

Side Note: For more from the world of Watchmen (as well as DC Universe titles featuring elements of Watchmen) be sure to check out the following on DCUI:

The murder of the Comedian is an exciting start

It also allows Moore to introduce the other characters by having Rorschach visit the other Watchmen with his theory of a mask killer.

I do think that Moore is distracting us at this point.

Though there is some talk about WHY the Comedian is killed, concentrating on WHO could have killed him might have been more appropriate.

There was an intense physical struggle and the Comedian, even in his sixties, was a very tough opponent, with raw strength and decades of experience.

There was no guns involved.

The killer had to physically take the Comedian and use enough force to sucessfully throw him through a strong plate glass window.

The Comedian was not invulnerable. There were far more easier ways to kill him, like a sniper bullet or subtle ways like poison.

The person felt he had to prove something, that he could take the Comedian on and win. This person has a big ego issue

If the idea was to kill the Comedian so there would be no reprecusions or quietly, the mission was a complete failure.

Re
Under the Hood
Three thoughts

Hollis wore a mask, not a hood. He reveals his secret identity in a book and there are no consequences. If there was a mask killer, he should have been the first killed, since his identity is known.

Under the hood also refers to his auto repair business

Finally Moore is trying to get ‘under the hood’ of super heroes, by deconstructing them.

In Harley’s comic
The panels are
Very variable, fluid,
Almost chaotic
As befits the main charcter.

Even when the number of panels vary
They do so in a rigid pattern
Such as the panel
Showing a gigantic
Dr Manhattan
Is one column
Replacing
Three of the
Usual nine panels,
As the other six panels
Retain their
Usual rigid placement. 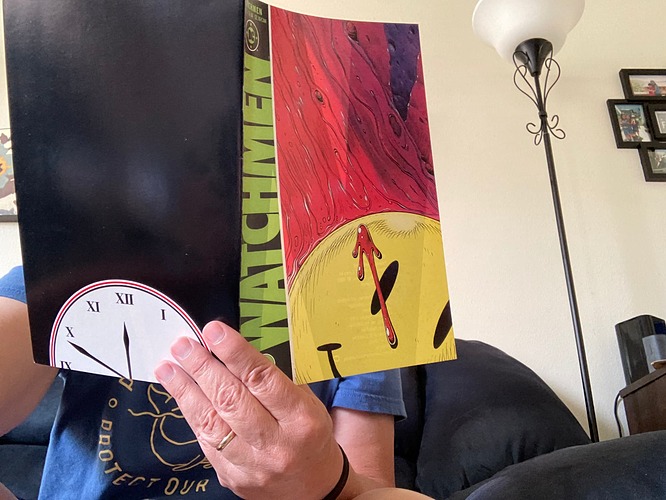 The panels in Watchmen give it a steady rhythm regardless of the action taking place. Comedian falling to his death gets the same beat as detectives investigating as Rorschach walking the street as Laurie and Dan reconnecting. It helps make smaller moments bigger and bigger moments seem more normal.

I cheated and read your post before the comic. So, my comments are colored by that. While we see the Comedian’s murder at the beginning, the comic actually is starting with the detectives investigating his death. That’s an interesting choice. As Rorschach says “A Comedian died in New York” past tense. The Comedian and his world belong in the past, which is reinforced with Dr. Manhattan, Veidt, and two Owlmen and Laurie having all seemingly moved on. This world has had enough of superheroes. As you say, this is all part distraction but it’s also part ‘look what they’ve lost.’
The other intro to the series is the voice of Rorschach through his journal. He’s a messed up dude, who is more interested in vengeance than justice and yet he’s the voice of the series.

It has been a very long time since I have read this series. I bought a new digital copy just so I could read along with everyone. Rorschach is full of prejudices as he narrates his investigation. The scenes of The Comedian’s killing are disturbing and evoke some sympathy before learning later on about his own crimes.
I would say the first sight of Dr. Manhattan definitely stands out. A giant naked blue man is an unusual sight! He comes off as very detached from regular life.
I think the book excerpt works well at adding some background and/or color to the story.

It’s definitely a solid opener. It sets up this new world we’re looking at just enough that you can get your bearings and have some idea of what’s going on, but leaves you wanting more information. You definitely get some strong first impressions of who Rorschach is from his narration, and finding out that this seemingly big superhero was possibly murdered is a solid hook to keep you going.

I have to admit something though – all these years and rereads, I’m still not entirely sure I get what Rorschach was doing with the wire hanger in the closet. Like, I get that he figures out there’s a hidden compartment, but I don’t get how the hanger is supposed to show that.

Hmm…that’s a hard one because there’s some compelling stuff in each scene. I liked how Rorschach was the connective tissue between each scene and introducing these characters because it shows us what this superhero world was like, and Rorschach’s…unique abrasiveness can get some of these characters really out of their comfort zone, so we get a sense of who they are under their more standard ways of presenting themselves if that makes sense.

I guess the best panel is probably Dan sitting next to his old, looming Nite-Owl costume after Rorschach leaves. It really shows without telling just the themes of what this series is going to deal with. Similarly, Dan and Laurie looking away wistfully after talking about how the Keene Act was the best thing that ever happened to them is very effective in that regard.

It’s funny, when I read this for the first time when I was younger – I think I was around 13, give or take, the prose parts were my least favorite part of the book. Not really because of “EW, WORDS” because I was still an avid prose reader at that time, but because it felt like an obstacle to the characters and mystery that I was wanting more of. But reading it now that I’m older and hopefully a little wiser, it definitely helps further set up this world in a way that the comic book panels jut don’t have the time or space for.

I don’t know if I have much else to say…I forgot about the bit of them talking about the guy who wanted to get beaten up by superheroes and how he was…“handled” by Rorschach, that was pretty hilarious.