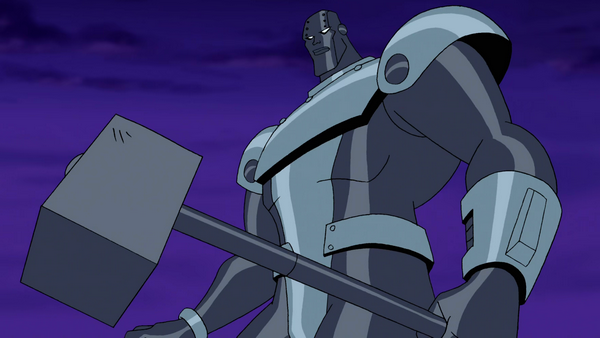 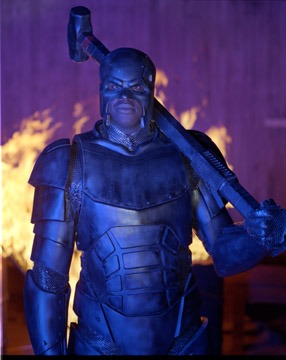 Come on, come all, @ModernAgeSupermanClub!

It’s a super double feature (kinda-sorta) of a seriously super ally of Superman’s, and an awesome hero in his own right!

Now to decide which Steel figures to bring to the shindig…

I’ve met Michael Dorn at my second Star Trek convention, he was such a nice guy and funny too.

I have a hard time associating “nice” and “Worf”, but that’s really great to hear, and awesome that you got to meet him!

The episode of Family Guy where Stewie kidnaps the stars of TNG is great.

MD: “They’ve got the ingredients, so why don’t they just make one?”

Stewie: “Because they just don’t!”

Who knew the DCAU Steel enjoyed the McRib? Its a heroic sammich though, so its not a surprise.

I love how we’re all talking about the DCAU version and ignoring that we’re apparently going to be subjected to the Shaq movie shortly afterward.

That episode of STAS is the tasty chaser before the kinda-icky drink that comes after.

Okay, Steel isn’t icky. I mean, no movie that ever had a toy line by Kenner ever was, regardless of how good or bad (or in-between) the movie may have been.

I love how we’re all talking about the DCAU version and ignoring that we’re apparently going to be subjected to the Shaq movie shortly afterward.

Sorry, (clearing my throat) when I first saw Steel on HBO Max over a year ago, I really thought it was a very good film. It wasn’t all that bad, it may look like a cheap Saturday afternoon movie, it was still good. The first 20 minutes was really based on Steel #1.
I’m just sorry the film was a flop, I think they did a good job of it. And last year I also got this movie on DVD. Why? Why not, it’s a DC comic film that shouldn’t be taken too seriously.

Excuse me, has this steel logo been here the entire time because it definitely didn’t come up when I searched for it last time!!!

I call dibs after you’re done!

And please, if you sprinkle out most of the container, then kindly refill it, m’kay? M’kay.

Sometime when I talk about DC characters, I like to use a emoji of theirs. All I did was hit `:’ spell their name, and this would appear in emoji search,

NGL, I’m going to use this:

as often as possible. It’s slick and shiny.

Who’s ready for some steel?

We’ll be starting on the hour with Superman: The Aminated Series, Season 2, Episode 21 “Prototype”

Is he really Superman? First I heard a boy who called himself Superman, then there were two other Superman sighting, one he’s half cyborg, other he wears a cool Sunglasses!
Will the real Superman please stand up.

What? Everyone knows Superman doesn’t wear sunglasses! And a half cyborg guy? That’s literally Cyborg @Reaganfan78. You must be seeing things…

I was referring to the Return of Superman. LOL!

Paused and ready to go.