Sunday! May 5th! 9am PST/12pm EST! Right here! I’m going to press PLAY on the FIRST EPISODE of Lynda Carter’s classic TV series, Wonder Woman: “The Pilot!” Then I’m going to talk about it while I watch, and so should you!

In our satin tights!
Fighting for our rights!
And the old red, white, and blue!

If this is your first Watch-Along, here’s how it works: on Sunday, May 5th, queue up Wonder Woman season 1, episode 1 on whatever device you use to watch DC Universe streaming content, and the moment your clock strikes the 9am PST/12pm EST hour, LET 'ER RIP by pressing play! Then watch it unfold with your fellow members and comment with us, live, here in this very thread!

Let’s make it a success, and turn Wonder Woman Wundays into an event we look forward to every week! (I did work pretty hard on coming up with that name!) Thanks to @HubCityQuestion for the idea! 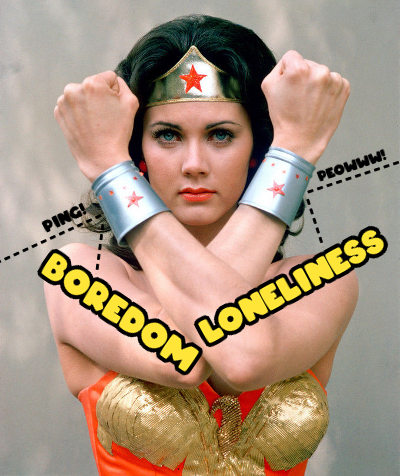 I can make this!

Sorry I wasn’t at your WAL earlier today. It totally slipped my mind. Looks like you had fun though so, huzzah!

Man, I wish I could join. Love the image

I hope you can, @Vroom! Today was such short notice, I ;hope this makes it easier for people to join in.

Sorry you can’t, @YoYoFroYo! I’m hoping someone will organize a WAL to fill the Saturday slot, at least until the official cartoon WAL resumes. Are you free Saturday mornings?

@biff_pow Can I bring nacho cheese?

Not Rico’s but looks at jar “Tos…ti…tos”. Tostitos. That’s fun to say.

Can’t wait to do my first watch a long to this show, one of the few classic series I haven’t watched any of.

Yessssss I hope you can make it, @OmniLad!

OmniLad, it is my absolute favorite show ever. I really wish I could join, but I have to work on Sunday, and may pull a 16 hour shift on Saturday (not by choice). Would anyone want to do a=some late night watch alongs?

@biff_pow Any chance of a WAL for the Cathy Lee Crosby WW TV movie at some point?

The Cathy Lee Crosby TV movie was my original suggestion! Maybe we’ll sneak it in later.

I knew I wasn’t the only one thinking about CLC’s WW. Great minds…

That’s two votes biff_pow. To quote Lucius Fox: “So what do you think?”

Shoot, I’m sorry for misunderstanding, @HubCityQuestion. I didn’t even know there was a TV movie until just now! I hope this episode makes for a fun watch-along, but you guys got it, TV movie next Sunday, if you’re both open.

Great idea! Some of the shows available like WW and Shazam I feel would be best (for me at least) as WALs, a way to get into the show with other fans where I might otherwise not get around to doing! I’d Love a Lois And Clark WAL later but for now WonderWundays would be doable as an early enjoyment! I’ll be making WonderWaffles just for the event if anyone wants to drop in unannounced

Yeah, watching with company definitely makes this stuff more enjoyable! And I’ve seen very little Lois and Clark, so that’d be fun for me too. I hope you and your waffles can make it on Sunday, @ResQanjo.

Ricardo Montleban votes for the first TV movie. He votes for it, indeed.

@Vroom the canned cheese-like sauce of the Gods! I think it’s what concession stands use, at least in Texas. You can buy Ricos stuff in bulk.