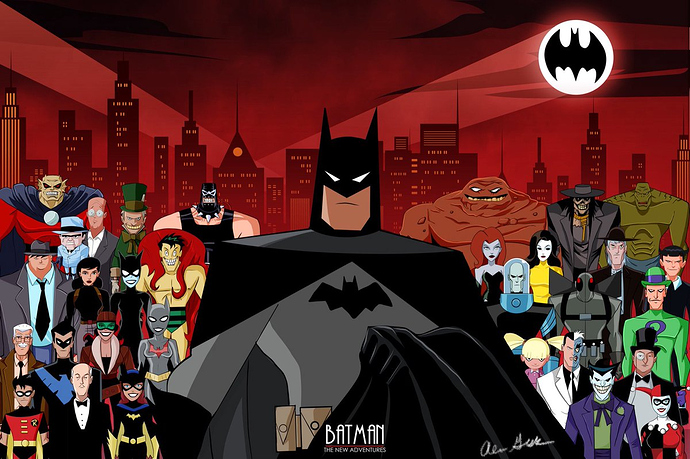 Also known as Batman Gotham Knights, this series takes place two years after the last episode of Batman: The Animated Series. Batman has continued to fight crime in Gotham City, but there have been some changes. Dick Grayson has become Nightwing; Tim Drake has taken over the role of Robin; Batgirl has become apart of Batman’s team. But the Dark Knight’s greatest villains continue to plague Gotham City, so not everything has changed.

We have our Top 5, folks! The episodes we’ll be watching are:

Please read on below to prepare yourself for how this works:
5pm PST/

What: The New Batman Adventures

Where: Right here on the forums! In this thread! In the comments below! Maybe on your phone! But also, you’ll be watching The New Batman Adventures on a big screen. So there, too.

Oh! One of the two I really wanted to watch is on the list! Was planning on being here anyways, but with this list I am even more excited about it. Can’t wait to see everyone later today for this.

Howdy, have you heard anything about Poison Ivy’s name being changed to Queen Ivy? I saw something about this the other day on one of those beyond the trail eps. That Grace lady made a pitch that it was fitting based on Epipremnum aureum resilience and invasive characteristics but IDK. I wanna say Marble Queen/Devil/Money is used more frequently as a common name than queen ivy right? I get writers are just looking for a cool name. I mean poison ivy isn’t even a true Hedera but it works with her whole shtick. Even the Eco terrorist thing would be a little funny if they weren’t, given poison ivy love them some extra CO2. Heck, a more fitting name would be after something with cicutoxins like Water Hemlock or combine the beauty with the deadly and call her Oleander. IDK “Queen” Ivy isn’t even the same genus, heck the only relations it has with poison ivy besides both being vascular is that they are angiosperms and calling marble ivy a flowers plant is being generous. Just go and call her Knotweed why don’t ya . I realize I’m nerding on this too much, you should hear me rip into Aquaman comics

. Gosh what I’d pay to have someone who knows a bit about marine bio write Aquaman! IDK I think Poison Ivy works just fine, what name would you give her if you had to change it?

We have our Top 5, folks! The episodes we’ll be watching are:

Whatever do you mean?

You Moderators got a great sense of humor!

I will see about being to this

Would love to have you, @Nickywood!

How do you do this on tv

If you have DC apps on Roku, Apple TV or Xbox one, put that on, then to interact on here use your computer, Phone, tablet or ipad.

If you have the episode on DVD or Blu-ray that’ll work too.

Oh great I have a Xbox one