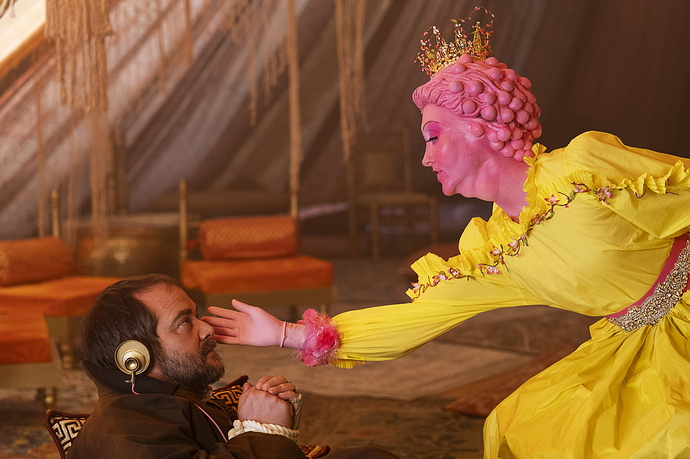 Last week’s episode was so far out of this world, we’re not sure how we even got back!

Out of guilt and sadness for what she did to Baby Doll and the others, Dorothy decided to run away. However, when Dorothy does something, it’s never halfway, so she ran away to the moon.

Niles, who just happened to have a second spaceship (because who doesn’t), manipulates Cliff in coming with him to track down Dorothy and bring her home.

Meanwhile, Larry is learning from the astronauts who just returned after spending 65 years in space that they have their own negative spirits, but have learned to live in harmony with them.

Jane & the personalities are holding a funeral for Baby Doll; they bring her body to a well in the woods; Jane says that she is still primary and they need to give everyone the chance to heal and not give up by throwing them in the well. Miranda comes out of the well and admits that she was reborn from spending time in the well. They throw the dead bodies into the well as their stations collapse – Miranda says she will reveal to Jane want Kay wants if she gives up being primary.

How will Cliff get back to Earth after Niles left him? Will Jane stay the primary?

Where: Right here on the forums! In this thread! In the comments below! Maybe on your phone! But also, you’ll be watching Doom Patrol on a big screen. So there, too.

Here’s hoping I can make it tonight

hopefully it all works out

This one sure looks weird.

A little over 30 minutes to go!

Hope you can make it, but, if not, reading the comments out of context is always fun too!

Right?! I’m not 100% sure, but I think this lady has consumed wayyyyyy too much Pepto Bismol.

lol! i don’t know what to think about her hairdo. It’s unique.

I’m doing good, @iJest! Glad to be back with my WAlers after being out of office for a week.

How’s everything with you?

I’m a little early but hey!!

We’re glad to have you back!! I’m doing okay! I didn’t get a lot done today but a little is better than nothing I guess, haha.

And good evening to everyone too!

Wasn’t quite the same without you lately! @Applejack did a great job while you were away tho and held it down!

Glad you could make it too @iJest!

@Applejack is the bomb dot com! She said it was a blast.

This new update has y’all looking fancy with the glowing profiles!

I agree, the new glowy snazziness is a nice touch

It really looks great on @Barrys.Better.Half because their profile pic is the same blue!