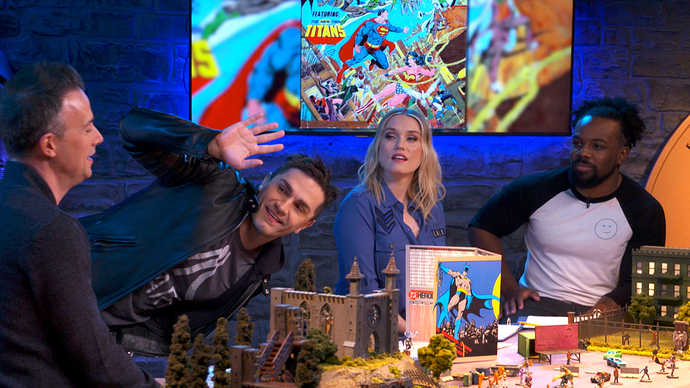 Another episode of DC All Star Games is here, and the masks have been coming off! …Or, should we say being put on, instead? One thing’s for sure, there have been some serious costume changes taking place as of late, and we’re here for every minute of it! Join us as we take Xavier’s advice to go where the day… rather, Episode 5 in this case, takes us! Will the journey feature a long-awaited fourth, and final character reveal?

Who: You, silly!
What: DC Universe All-Star Games, Season 1, Episode 5
Where : Right here on the forums! In this thread! In the comments below! Maybe on your phone! But also, you’ll be watching DC Universe All-Star Games on a big screen. So there, too.
When: Friday, March 27th, at 6p PST/9p EST
Why: Because the community that geeks out together, stays together.
How: Great question- read below!

Just watched it. It was so good. I couldn’t stop smiling and laughing the whole time. If I can I will definitely be here to watch it again with everyone.

Well hello, my beautiful seedlings! It’s good to be back, I’ve missed you

A little less than 30 minutes before we click that “play” button!

You know, I’m usually debating with myself whether or not to watch these beforehand. But honestly, these past couple of episodes I’ve been having a lot of fun just experiencing these fresh with the crowd. The surprises, the laughs, the commentary. It all feels more genuine in a sense.

How about you guys?

@BCDC, I love being able speak to the crazy twists and turns, but if I always prefer to 100% watch fresh with the group!

Did anyone else know there is an episode six after this? I thought this was the finale! Man, next Friday’s going to be exciting.

That was something they started cooking up last week. We were hoping folks would slyly notice tonight.

So it was five episodes and they added something extra?

Also, that movie, so good!

Yep, and as a little bonus they are making the series free for non-subscribers too. Great way to get more people on board!

8 minutes to go, folks! Grab your snacks and drinks!

Cant be making it tonight

just have time to stop by and say hi, great episode though, I was right about carl

Awww, bummer @Nomad531! Hopefully next week, we scored an extra episode to close us out!