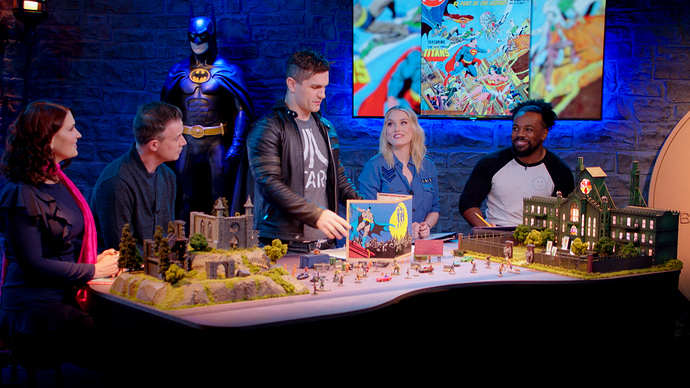 As another week of DCU All-Star Games arrives, the plot continues to thicken as our friends delve deeper into the mystery at hand, only to find themselves being led down a path full of twists, turns, and unexpected surprises! Join us as we continue to investigate Gotham City secrets, and move one episode closer to uncovering everyone’s true identities!

While you’re at it, don’t forget to take time today to drop by our Live Q&A w/ Sam Witwer thread, and let our resident Game Master Extraordinaire know what pressing questions you have for him! Sam will be answering them live TONIGHT, Fri 3/20 at 6:30pm PST!

Who: You, silly!
What: DC Universe All-Star Games, Season 1, Episode 4
Where : Right here on the forums! In this thread! In the comments below! Maybe on your phone! But also, you’ll be watching DC Universe All-Star Games on a big screen. So there, too.
When:: Friday, March 20th, at 6p PST/9p EST
Why: Because the community that geeks out together, stays together.
How: Great question- read below!

This is going to be fun watching it with you @Barrys.Better.Half.

What you think of the show so far?

Thanks @Reaganfan78! I’m super excited to be a part of this Watch-a-long. I’m loving this show so far! Freddie Prinze Jr was a '90s heartthrob for most teenage girls (myself included). My favorite though is watching Xavier Woods geek out. Who woulda thunk he was such a huge fan of DC?

After reading the Flash this week, I’m now convinced that Carl is really Barry Allen, for a while I thought he was Billy Batson. Dina has to be Wonder Woman while Katie is Catwoman and I think Tommy is the Joker. Can’t wait to see how episode 4 will turn out!

I hope they continue with more of these. Maybe they shot more so we can watch along in this crazy time! I wish these were longer!

I wish I could be there but I think I’m gonna be busy with reading comics, I’ll try to make it.

I will try to be there. I just finished watching the episode and it was crazy. Can’t wait to see what everyone else thought.

As a special treat, Sam Witwer will be joining right after the WAL for a Q&A! If you have any questions for the Game Master extraordinaire, be sure to drop there here: Live Q&A w/ Sam Witwer thread

Wonder if he’ll join us for the watch along? That’d be cool!

30 Minutes until the show!!

Hey @Barrys.Better.Half, I can tell you what happen in this episode!

Don’t worry I won’t spoil it.

15 Minutes to go! I’m SO excited! Make sure to grab your snacks.

@Barrys.Better.Half, is Sam Wither joining us for the watch along before doing Q&A?

I’m not sure, I know he will be at the Q&A afterwards.

Do you have some questions lined up for him @Reaganfan78?

I ask him at the start of the game, does he know who each players would be before they do?

Oooh good question! I have my guesses but I’ll keep them to myself.